When my copy of Daphne du Maurier’s The Infernal World of Branwell Bronte arrived, I was pleased to note that it had originally been purchased from the Howarth Bronte shop and still bore a sticker proclaiming this in its bottom right hand corner. Of the du Mauriers which I had planned to read during my du Maurier December project, The Infernal World of Branwell Bronte was one of those which I was most intrigued by. Before beginning to read, I knew a little about Branwell Bronte, but only in the context of his sisters.  I was therefore so interested to learn what he was like as an entirely separate being.

In her introduction, du Maurier sets out her reasons for producing a biography of a figure who was largely overshadowed by the fame of his three surviving sisters, Charlotte, Emily and Anne: ‘One day the definitive biography of this tragic young man will be published.  Meanwhile, many years of interest in the subject, and much reading, have prompted the present writer to attempt a study of his life and work which may serve as an introduction to both’. 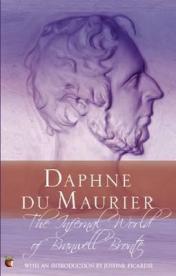 Branwell and his sisters spring to life immediately.  Their sad beginning – their mother dying when Branwell was tiny, and the consequent deaths of the eldest two Bronte sisters, Maria and Elizabeth, in 1825 – caused the four remaining siblings to mould themselves into an impenetrable group.  From the very beginning, du Maurier states that Charlotte, Emily and Anne were all greatly inspired
by their brother, particularly during their early childhood: ‘None of these novels [Jane Eyre, Wuthering Heights and The Tenant of Wildfell Hall] would have come into being had not their creators lived, during childhood, in this fantasy world, which was largely inspired and directed by their only brother, Patrick Branwell Bronte’.  She goes on to say that in their childhood, the four children wrote tiny books together in ‘a blend of Yorkshire, Greek and Latin which could only be spoken among the four of them, to the mystification of their elders’.  Branwell certainly comes across as an inventive child: ‘Imitative as a monkey, the boy was speaking in brogue on a Monday, broad Yorkshire on a Tuesday and back to the west country on the Wednesday’, and it is clear that du Maurier holds compassion for him.

Du Maurier discusses Branwell’s work throughout, often relating his creative output to the things which he was experiencing in life: ‘Although, on examination, Branwell’s manuscripts show that he did not possess the amazing talent of his famous sisters, they prove him to have had a boyhood and youth of almost incredibly productivity, so spending himself in the process of describing the lives and loves of his imaginary characters that invention was exhausted by the time he was twenty-one’.  His poetry particularly is often vivid:

“Backward I look upon my life,
And see one waste of storm and strife,
One wrack of sorrows, hopes and pain,
Vanishing to arise again!
That life has moved through evening, where
Continual shadows veiled my sphere;
From youth’s horizon upward rolled
To life’s meridian, dark and cold.”

The secondary materials included – a large bibliography, notes, sources, and a list of Branwell’s manuscripts – are extensive, and it is clear that du Maurier did an awful lot of research on and around her subject before putting pen to paper.  The Infernal World of Branwell Bronte includes quotes from Branwell’s letters, as well as his own prose.  Secondary documents of Charlotte’s have been taken into account, particularly when discussing Branwell’s illness and death.  Instances of literary criticism from a handful of different sources are also present.  Du Maurier marvellously weaves in the social history of the period – the death of kings and queens, for example. 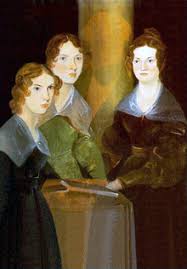 Whilst he is not always likeable, Branwell is an incredibly interesting subject for a biography, particularly for an author such as du Maurier to tackle.  She has demonstrated the many sides of his character, some of which were reserved particularly for certain people.  Du Maurier does continually talk of Charlotte, Emily and Anne, particularly during their childhoods, but one expects that it would be hard to write such a biography without taking them into account so often.  She does continually assert the place of Branwell in the Bronte family, however, and admirably, he is always her main focus.

Of the portrait of the Bronte sisters shown, du Maurier writes: ‘Close inspection of the group has lately shown that what was thought to be a pillar is, in reality, the painted-out head and shoulders of the artist himself.  The broad high forehead, the hair puffed at the sides, the line of coat and collar, all are there.  Perhaps Branwell did not consider that he had done his own face justice, and in a fit of irritation smudged himself into oblivion’.

The Infernal World of Branwell Bronte is extremely well set out, and is easy to read.  The chapters are all rather short, and consequently it can be dipped in and out of, or read alongside other books.  Again, du Maurier’s wrork is thorough and well plotted, and provides an insightful and rewarding look into a relatively neglected part of the Bronte quartet.