Written between October 1845 and June 1846 and published under the pseudonym Ellis Bell, Wuthering Heights became Emily Bronte’s only published novel.  I first read it some years ago and was swept away with the stunning Gothic setting and Bronte’s marvellously crafted characters.  When a re-read was proposed as part of the new Blogging Book Club which has been set up along with the lovely Girl With Her Head In a Book, I jumped at the chance.  I was also thrilled that I was able to tie the book in with my Classics Club list.

It goes without saying that Wuthering Heights is distinctive and has inspired many other works since its publication.  I will not recap the story in my own words for fear of giving too much away.  Instead, I have chosen to copy a blurb which I feel sets the tone perfectly and leaves much of the plot to the reader’s own discovery: “Lockwood, the new tenant of Thrushcross Grange on the bleak Yorkshire moors, is forced to seek shelter one night at Wuthering Heights, the home of his landlord. There he discovers the history of the tempestuous events that took place years before: of the intense passion between the foundling Heathcliff and Catherine Earnshaw, and her betrayal of him. As Heathcliff’s bitterness and vengeance is visited upon the next generation, their innocent heirs must struggle to escape the legacy of the past.” 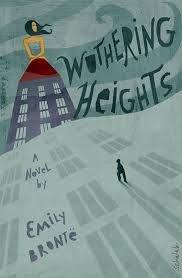 I adore Bronte’s writing; in fact, it is fair to say that I am a bit of a Bronte fangirl.  The storyline which has been woven into Wuthering Heights is clever and atmospheric.  I love the way in which elements come to the forefront and then dissipate slightly, and the technique which Bronte uses in order to tie everything together as she nears the end of her tale.  She has a deft touch when it comes to both scenes and characters, and they are, without exception, marvellously built throughout the novel.

Wuthering Heights conjures so many emotions in the mind, and is even chilling to the very bones in places.  It is an enduring classic which I am sure I will come back to many times in the future.