Of Scottish author Jackie Kay’s work, I have to date read two poetry collections, Bantam and The Adoption Papers.  I liked the core ideas of both collections, but was ultimately disappointed by them.  For me, neither quite came together as well as I was expecting.  I was still keen, however, to pick up some of her fiction whilst still living in Scotland, and decided to get myself a copy of Reality, Reality from Fopp.  This, her third collection of short stories, was first published in 2012.

All of the stories within Reality, Reality focus upon women, and also on variations of loss.  It is, says its blurb, a 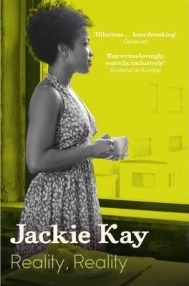 collection ‘full of compassion, generosity, sorrow and joy’, and brings together fifteen ‘unforgettable stories [which] explore the power of the imagination to make things real…’.  The Observer comments that ‘Existential questions of contemporary life are at the heart of this hilarious, heartbreaking collection that skilfully slots large ideas into small squares’, and The Times calls it ‘spiky’ and ‘off-the-wall’.

Somewhat unusual occurrences happen in some, but not all, of these stories.  In the title tale, the protagonist, Stef, imagines that she has been picked for the semi-finals of a cookery programme, and attempts to cook culinary delights within set time limits, critiquing herself harshly as she does so.  ‘These are not my clothes’ is narrated by a woman living with memory loss, shut within a facility where those around her have faces ‘like the empty bowls, lined and ridged with the remains of things.’  ‘The First Lady of Song’ is told from the perspective of a 300-year-old woman, who has been reincarnated as many different famous female singers throughout history.  As even this short list demonstrates, Reality, Reality comprises some tales which are realist, and others which have a touch of magical realism to them.

Some of the tales here are sad; others are hopeful and joyous.  ‘Grace and Rose’, for example, is a brief story told from the perspective of two women, who have been a couple for twenty years, and are finally being allowed to marry in Scotland.  There are some very thoughtful, considered moments in several of the stories.  When the narrator of ‘The First Lady of Song’ recounts all of her children who have passed away from various diseases over time – ‘typhus, whooping cough, scarlet fever, tuberculosis, cholera, small pox, influenza’ – for instance, she goes on to reflect and lament about the fact that she is still living: ‘It was never for me, death, never going to be handed to me on a lovely silver platter, not the gurgle or the snap or the thud or the whack or the slide of it, death.  No.  I was consigned to listening to the peal of church bells barely change over the stretch of years.’  This was a clever and quite original story.  Sadly, some of the others collected here were less engaging, due to the similar narrative voices which were used, or to Kay’s use of overexaggerated dialects.

Some of these stories I connected with, and others I did not.  Whilst I liked the real variation in plot which Kay gives, I did find the less memorable, realist stories to be quite similar on the whole.  Kay does give a voice to those in the LGBT community, an element which feels so important in this collection, but I did not feel as though their relationships were often explored enough.  I found Kay’s writing a little inconsistent; sometimes, as in ‘These are not my clothes’, it is poignant and beautiful, but at others, it falls a little flat.  Regardless, Reality, Reality is an inclusive collection; Kay has considered women from different walks of life, and who are at different stages in their lives.  There are a lot of themes which can be identified here, from loneliness and ageing to poverty and human trafficking.

Despite the moments of brilliance in Reality, Reality, and a couple of very realistic character creations, I did find the collection a little brief, and on the whole underdeveloped.  Whilst this is by no means a bad short story collection, I failed to connect to many of the stories, and a lot of them simply did not personally appeal.  I do not feel as though many of the tales are going to be at all memorable, and the stories which deal with the everyday just did not stand out for me.  I’m not going to rush out to read any more of Kay’s work, as I feel as though I’ve given it a fair go now.  Sadly, Reality, Reality was, for me, rather underwhelming.

I have not had much time to read of late, and my blogging time has been close to zero hours per week; not ideal, but as I am sure you’ll understand, I need to prioritise my studies.  That said, I thought I would take the opportunity to recommend three standout books which I have very much enjoyed reading over the last couple of months.

1. Nightwood by Djuna Barnes (1936; one of the first novels to portray homosexuality) 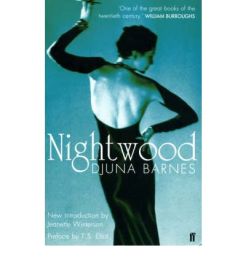 – ‘A masterpiece of modernism’ (The Washington Post Book World)
– ‘To have been madly and disastrously in love is a kind of glory that can only be made intelligible in a sublime poetry―the revelatory and layered poetry of Djuna Barnes’s masterpiece, Nightwood.’ (Dorothy Allison, author of Bastard Out of Carolina)

‘Nightwood is not only a classic of modernist literature, but was also acknowledged by T. S. Eliot as one of the great novels of the 20th century. Eliot admired Djuna Barnes’ rich, evocative language. Barnes told a friend that Nightwood was written with her own blood ‘while it was still running.’ That flowing wound was the breakup of an eight-year relationship with the love of her life. Now recognised as a twentieth-century classic, the influence of Djuna Barnes’s novel has been, and continues to be, exceptional.’ 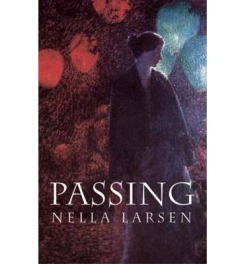 – ‘Absolutely absorbing, fascinating, and indispensable’ (Alice Walker)
– ‘A work so fine, sensitive, and distinguished that it rises above race categories and becomes that rare object, a good novel’ (The Saturday Review of Literature)

‘Married to a successful physician and prominently ensconced in Harlem’s vibrant society of the 1920s, Irene Redfield leads a charmed existence-until she is shaken out of it by a chance encounter with a childhood friend who has been “passing for white.” An important figure in the Harlem Renaissance, Nella Larsen was the first African-American woman to be awarded a Guggenheim fellowship. Her fictional portraits of women seeking their identities through a fog of racial confusion were informed by her own Danish-West Indian parentage, and “Passing” offers fascinating psychological insights into issues of race and gender.’ 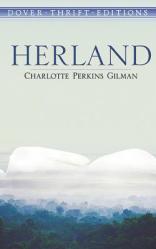 ‘In “Herland, ” a vision of a feminist utopia, Gilman employs humor to engaging effect in a story about three male explorers who stumble upon an all-female society isolated somewhere in South America. Noting the advanced state of the civilization they’ve encountered, the visitors set out to find some males, assuming that since the country is so civilized, “there must be men.” A delightful fantasy, the story enables Gilman to articulate her then-unconventional views of male-female roles and capabilities, motherhood, individuality, privacy, the sense of community, sexuality, and many other topics. Decades ahead of her time in evolving a humanistic, feminist perspective, Gilman has been rediscovered and warmly embraced by contemporary feminists.’

I have a slight obsession with inter-war novels and the lives of those people who culturally helped shape the Jazz Age. There are some amazing women who played public and literary roles whose stories I have enjoyed greatly and in honor of International Women’s day in March I thought I would list some of my forever favorite bios.

If there was ever a muse to an author, it was surely Zelda to Scott. She was the idealized flapper to the pubic and for a while they were the enchanted couple. Hadley Hemingway once said that to watch Scott and Zelda dance the Charleston in Paris was to see it done to perfection and not to be forgotten. From the early years to the glory years and the decline of her mental health, this book has her story wonderfully compiled, and is the most complete of anything I’ve read yet on Zelda.

Edna St. Vincent Millay’s critical approval was years long in coming, despite her first piece’s success. To say she lived life on her own terms doesn’t even apply. She was a terrific and wild force. Her exploits sexually are legendary, but her relationships with her mother and anyone strong enough to get close to her, are complicated to extremes.  This is a must read for Jazz Age enthusiasts.

Not technically biography, but more a chronicle of the lives of four pillars of the Jazz Age woman. Dorothy Parker, Edna Thurber, Zelda Fitzgerald and Edna St. Vincent Millay are followed yearly from 1920 through 1929. This is a mixture of social history, biography, gossip and overview of their lives. I did like how it was done one year at a time. It was a nice way to show parallels in their lives and careers. A fun addition to full biographies, it is less formal and is a quick read.