I am beginning this edition of The Book Trail with a novel written by one of my favourite authors, Carson McCullers.  As ever, I have used the ‘Readers Also Enjoyed’ tool on Goodreads in order to generate this list.  A couple are books which I have already read, and others are ones which are slowly creeping up my vast to-read list.

1. The Member of the Wedding by Carson McCullers

‘Twelve-year-old Frankie Adams, longing at once for escape and belonging, takes her role as “member of the wedding” to mean that when her older brother marries she will join the happy couple in their new life together. But Frankie is unlucky in love; her mother is dead, and Frankie narrowly escapes being raped by a drunken soldier during a farewell tour of the town. Worst of all, “member of the wedding” doesn’t mean what she thinks. A gorgeous, brief coming-of-age novel.’

2. Delta Wedding by Eudora Welty
‘Set on the Mississippi Delta in 1923, this story captures the mind and manners of the Fairchilds, a large aristocratic family, self-contained and elusive as the wind. The vagaries of the Fairchilds are keenly observed, and sometimes harshly judged, by nine-year-old Laura McRaven, a Fairchild cousin who takes The Yellow Dog train to the Delta for Dabney Fairchild’s wedding. An only child whose mother has just died, Laura is resentful of her boisterous, careless cousins, and desperate for their acceptance. As the hour moves closer and closer to wedding day, Laura arrives at a more subtle understanding of both the Fairchilds and herself.’

3. North Towards Home by Willie Morris
‘With his signature style and grace, Willie Morris, arguably one of this country’s finest Southern writers, presents us with an unparalleled memoir of a country in transition and a boy coming of age in a period of tumultuous cultural, social, and political change.   In North Toward Home, Morris vividly recalls the South of his childhood with all of its cruelty, grace, and foibles intact.  He chronicles desegregation and the rise of Lyndon Johnson in Texas in the 50s and 60s, and New York in the 1960s, where he became the controversial editor of Harper‘s magazine.  North Toward Home is the perceptive story of the education of an observant and intelligent young man, and a gifted writer’s keen observations of a country in transition. It is, as Walker Percy wrote, “a touching, deeply felt and memorable account of one man’s pilgrimage.”‘

4. The Voice at the Back Door by Elizabeth Spencer
‘In the mid-1950s, the town of Lacey in the Mississippi hill country is a place where the lives of blacks and whites, though seemingly separate, are in fact historically and inevitably intertwined. When Lacey’s fair-haired boy, Duncan Harper, is appointed interim sheriff, he makes public his private convictions about the equality of blacks before the law, and the combined threat and promise he represents to the understood order of things in Lacey affects almost every member of the community. In the end, Harper succeeds in pointing the way for individuals, both black and white, to find a more harmonious coexistence, but at a sacrifice all must come to regret. In The Voice at the Back Door, Mississippi native Elizabeth Spencer gives form to the many voices that shaped her view of race relations while growing up, and at the same time discovers her own voice – one of hope. Employing her extraordinary literary powers – finely honed narrative techniques, insight into a rich, diverse cast of characters, and an unerring ear for dialect – Spencer makes palpable the psychological milieu of a small southern town hobbled by tradition but lurching toward the dawn of the civil rights movement. First published in 1956, The Voice at the Back Door is Spencer’s most highly praised novel yet, and her last to treat small-town life in Mississippi.’

5. Dreams of Sleep by Josephine Humphreys 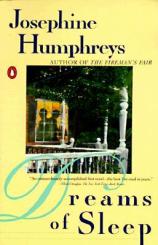 ‘Alice Reese knows that the cheerful sounds of her family eating breakfast mask a ten–year marriage falling apart. As Alice and her husband, Will, struggle to understand–and perhaps recapture–the feelings that drew them together in the first place, their interior lives are sensitively and convincingly explored.’

6. Household Words by Joan Silber
‘The year is 1940, and Rhoda Taber is pregnant with her first child. Satisfied with her comfortable house in a New Jersey suburb and her reliable husband, Leonard, she expects that her life will be predictable and secure. Surprised by an untimely death, an unexpected illness, and the contrary natures of her two daughters, Rhoda finds that fate undermines her sense of entitlement and security. Shrewd, wry, and sometimes bitter, Rhoda reveals herself to be a wonderfully flawed and achingly real woman caught up in the unexpectedness of her own life.’

7. A Way of Life, Like Any Other by Darcy O’Brien
‘The hero of Darcy O’Brien’s A Way of Life, Like Any Other is a child of Hollywood, and once his life was a glittery dream. His father starred in Westerns. His mother was a goddess of the silver screen. The family enjoyed the high life on their estate, Casa Fiesta. But his parents’ careers have crashed since then, and their marriage has broken up too.  Lovesick and sex-crazed, the mother sets out on an intercontinental quest for the right—or wrong—man, while her mild-mannered but manipulative former husband clings to his memories in California. And their teenage son? How he struggles both to keep faith with his family and to get by himself, and what in the end he must do to break free, makes for a classic coming-of-age story—a novel that combines keen insight and devastating wit to hilarious and heartbreaking effect.’

8. School for Love by Olivia Manning
‘Jerusalem in 1945 is a city in flux: refugees from the war in Europe fill its streets and cafés, the British colonial mandate is coming to an end, and tensions are on the rise between the Arab and Jewish populations. Felix Latimer, a recently orphaned teenager, arrives in Jerusalem from Baghdad, biding time until he can secure passage to England. Adrift and deeply lonely, Felix has no choice but to room in a boardinghouse run by Miss Bohun, a relative he has never met. Miss Bohun is a holy terror, a cheerless miser who proclaims the ideals of a fundamentalist group known as the Ever-Readies—joy, charity, and love—even as she makes life a misery for her boarders. Then Mrs. Ellis, a fascinating young widow, moves into the house and disrupts its dreary routine for good.  Olivia Manning’s great subject is the lives of ordinary people caught up in history. Here, as in her panoramic depiction of World War II, The Balkan Trilogy, she offers a rich and psychologically nuanced story of life on the precipice, and she tells it with equal parts compassion, skepticism, and humour.’

Have you read any of these books?