Irena’s Children, a biographical account of Irena Sendler, a woman who saved thousands of children’s lives in Warsaw during the Second World War, has been written by New York Times bestselling author Tilar J. Mazzeo.  I have been fascinated by Sendler since I first learnt about her quite a few years ago, but at the time, I found it very difficult to find any books which focused upon her.  I was thrilled, therefore, when I spotted Irena’s Children quite by chance when browsing in the library, and began it almost as soon as I returned home. 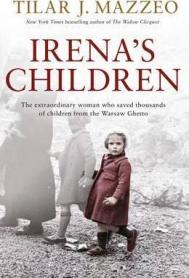 Known as ‘the female Schindler’, Sendler, along with a vast network of resistance members, saved over 2,500 children from the Nazis in occupied Poland.  At the outbreak of war, Sendler, a Catholic, had just received a Master’s degree in social work, and had found employment as a social worker.  She was therefore allowed access to the Warsaw Ghetto, an area which all of the Jewish citizens of the city were forced to move into.  The Ghetto, overcrowded and suffering from a lack of food and sanitation, was the cruellest of places.  Mazzeo describes it as follows: ‘An area of seventy-three streets in the city – just over four percent of the streets in Warsaw – had been reserved for the Jews, carved out from what had long been one of the poorest and most run-down neighborhoods in the city centre.’  At its height, the Ghetto held over 250,000 people, many of whom were sent to different concentration camps.

Throughout the pogrom, and until the liquidation of the Ghetto in May 1943, Sendler had to ask many parents to trust her with their children.  She then set out ‘smuggling them out of the walled district, convincing friends and neighbours to hide them.  With their help and the help of local tradesmen and her lover in the Jewish Resistance, Irena made dangerous trips through the city’s sewers, hid children in coffins, snuck them out under overcoats at checkpoints and slipped them through secret passageways in abandoned buildings.’  Sendler kept extensive lists of the children’s real names, hoping that by doing so, they could be reunited with their families after the war’s end.  Of course, this only happened in relatively few cases, as many of the children’s families were murdered in concentration camps, or in the Ghetto itself.  She wrote each child’s name, along with the names of their parents and their addresses, in code on ‘flimsy scraps’ of cigarette paper, which she hid as best she could.

The leaders of the Resistance recognised how valuable Sendler was, and set up a cell under her direction.  She was more than willing to use her own initiative, and work closely with others, in order to save so many Jewish children: ‘Irena had wanted an adventure and, knowing that they were fighting against their oppressor, even if it was dangerous, made her feel alive.’

Sendler evaded detection for such a long time due to her appearance, and even when she was captured by the Nazis and taken in to be tortured, they were completely oblivious to the fact that they had one of the key members of the Resistance network in their clutches.  They thought that, because she looked like a feeble woman, she must just be a minor player, and could lead them to the main orchestrators of the movement.  Sendler is described as a ‘feather of a person with an iron spirit: a four-foot-eleven-inch wisp of a young woman, in her late twenties when the war began, who fought with the ferocity and intelligence of an experienced general and organized, across the city of Warsaw and across the divides of religion, dozens of average people into foot soldiers.’

In her prologue, which opens with a moment in 1943 in which the Gestapo come for Sendler, Mazzeo is honest and fair: ‘To make her a saint in the telling of her story is, in the end, to do a kind of dishonor to the true complexity and difficulty of her very human choices.’  She goes on to say, in the book’s preface, that ‘Irena’s love life was anarchic and unruly, and she struggled with the knowledge that she was not a good wife or a good daughter.  She placed her frail and ailing mother in grave danger and kept the knowledge of those risks from her.  She was reckless and sometimes myopic… and, at moments, she was perhaps even selfish in her selflessness.’  Mazzeo pieced together Irena’s Children by using primary materials, as well as Sendler’s own recollections, and interviews with some of those whom she helped.

Sendler’s childhood, and her reasoning for wanting to help others, is documented fully, and is also well-situated historically.  Whilst there is a lot of information woven through Irena’s Children, and such a high level of scholarship to boot, the book is markedly easy to read.  Irena’s Children brings to the fore the story of an important, and incredibly courageous, woman, who risked her own life multiple times every day in order to help others to survive.  This biography, fascinating and harrowing in equal measure, should be read by everyone.