‘And the Mountains Echoed’ by Khaled Hosseini

And the Mountains Echoed by Khaled Hosseini ****
I absolutely adore Hosseini’s work, and have been very much looking forward to reading And the Mountains Echoed ever since I first heard of its publication.  I requested several review copies of it but nothing came to fruition, and I was finally rewarded on Christmas Day with the beautiful hardback edition which I could not wait to begin.

The novel begins in Afghanistan in 1952, and its premise has the power to both warm and break the hearts of its readers:

“To Abdullah, [his sister] Pari… is everything.  More like a parent than a brother, Abdullah will do anything for her, even trading his only pair of shoes for a feather for her treasured collection.”

Hosseini is a marvel.  I adored the different narrative perspectives which he made use of throughout, and the way in which he followed many of his characters – in such a way, in fact, that the first impression of many of them was not the one which would linger in the mind after the final page had been closed.  He has such skill with addressing prejudices and with changing perceptions, and the entirety of the novel’s plot was rendered so vividly in consequence.  So many layers have been placed upon one another to create the whole, and such a rich book has been created.  As one may expect from reading the blurb of And the Mountains Echoed, it is tinged with sadness from the start, but the beauty within its pages is prevalent too.  It is a novel which is well worth reading, particularly if you have a day to spare, for it is a very difficult book to put down. ‘The Septembers of Shiraz’ by Dalia Sofer

The Septembers of Shiraz by Dalia Sofer ****

I so enjoyed my literary foray into Afghanistan in the aforementioned And the Mountains Echoed that I was longing to go back immediately.  I sadly did not have any books set in the general area on my to-read shelves, so I plumped instead for reading a novel which I first read some years ago, and which I did not really enjoy.  Rather than Afghanistan, The Septembers of Shiraz is set in Iran, but it provides a marvellous continuation from Hosseini’s work.

Upon re-reading this great novel, I struggle to see why I failed to like it the first time around.  The only thing which I can think of is that I read it during my A-Level examinations, and was therefore unable to fully immerse myself within it.  I am so, so glad that I thought to pick it back up.  The Septembers of Shiraz is set in Tehran in 1982, in the aftermath of the Iranian Revolution.  It takes as its focus the character of Isaac Amin, a Jewish man living in the city with his wife and daughter.  At the very start of the novel, he is arrested, under the incorrect assumption that he is a spy.

Sofer’s descriptions are lovely, and her use of colour particularly is glorious.  It enables her to strongly create the sense of place throughout.  Despite this book’s length, I found it a surprisingly quick read, and will certainly be picking up more of the author’s work in future.  The Septembers of Shiraz is a highly recommended historical novel about one of the most pivotal periods in Iranian history. 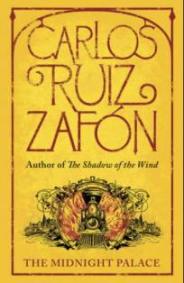 The Midnight Palace by Carlos Ruiz Zafon **
Carlos Ruiz Zafon’s author note in The Midnight Palace states that the novel is the second in a series, but nowhere does it say what it is a sequel to, or which series it makes up.  (NB: I am still clueless about this).  Judging from its blurb, the story looked relatively well contained, and so I decided to go ahead and read it anyway.  The book is billed as a ghost story – to be more precise, as ‘a haunting story for the young, and the young at heart’ – and I suppose it is one of sorts, but as it is aimed within the young adult market, any suspense or creepiness which Zafon is quite capable of building up feels lost in the slightly cushioned choice of genre.

The Midnight Palace begins in 1916 and takes Calcutta as its setting.  The Midnight Palace of the book’s title is an abandoned mansion, where seven boys from an orphanage meet.  The sense of place is well drawn throughout, and the first few pages – and, indeed, the blurb – definitely hold intrigue:

“1916, Calcutta. A man pauses for breath outside the ruins of Jheeter’s Gate station knowing he has only hours to live. Pursued by assassins, he must ensure the safety of two newborn twins, before disappearing into the night to meet his fate. 1932. Ben and his friends are due to leave the orphanage which has been their home for sixteen years. Tonight will be the final meeting of their secret club, in the old ruin they christened The Midnight Palace. Then Ben discovers he has a sister – and together they learn the tragic story of their past, as a shadowy figures lures them to a terrifying showdown in the ruins of Jheeter’s Gate station.”

Sadly, I found that the intrigue which was well built up at first was not consistent in the novel, and I soon found myself drifting away from the story and unable to get really ‘into’ it, as I have been able to do with the rest of Zafon’s tales. The pace was well realised, and I enjoyed the plot, but the distancing – made particularly apparent by the choice of a third person narrator – really held me back with my reading of the book.

The mysteries throughout are introduced at intervals, so I occasionally found that my interest in the book was piqued, but the entirety did not hook me as I expected it to.  I had no problems with the execution of the book or its storyline, as such, but I found its characters so flat and distinctly lacking in substance.  Even though The Midnight Palace was quite a quick read, I personally found it quite a slog to get through.  Those who already enjoy his books for younger readers, however, are sure to very much enjoy it.