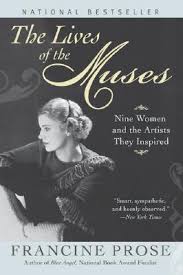 ‘The Lives of the Muses’ by Francine Prose

This book was written in the very first to-read notebook which I began rather a few years ago now, and since April and I are both interested in women and their social position throughout history, I thought that it would be a perfect choice to read together.

The blurb of Francine Prose’s The Lives of the Muses: Nine Women and the Artists They Inspired says that it is ‘fascinating and provocative’, and that throughout, the author ‘explores the complex relationships’ which exist between artists and their muses.  Prose has chosen to focus her attentions upon nine women over rather a long historical period, a structure which works incredibly well.  She has also included a broad scope of muses in terms of the fields in which they inspired, ranging from literature to photography, and from music to dance.

The introduction which Prose has crafted is beautifully written and well set out, and each essay chapter which follows has been nicely constructed.  Prose writes intelligently throughout without excluding the general reader from her audience.  The enormous bibliography at the end of the volume is impressive in its scope, and my to-read list has been added to rather considerably in consequence.

As often happens with such books, I found some of the chapters far more interesting than others in terms of the subjects which Prose presents.  The section of Alice Liddell, for example, was fascinating, as was the section on Lizzie Siddal.  Granted, these were the two muses in the collection who appealed to me the most, as I am already a great fan of the work which each inspired (Alice’s Adventures in Wonderland and many of the pre-Raphaelite paintings respectively).  Throughout, Prose critiques the work of the artist too, thus enabling herself to studying the male partner (or partners plural, in the case of Lou Andreas-Salome) whom the muses inspired in some detail.

The Lives of the Muses is a far-reaching biography, which, on the whole, does not disappoint.  Audra, a reviewer whom I greatly respect, commented on my book haul post which featured this tome that the book is rather enjoyable, but that it does not quite go far enough at times, and I do agree with this.  Some sections are undoubtedly well crafted, but for some reason, others can feel a little flat or underdeveloped in comparison.  Important details are sometimes skimmed over or saturated within other information, so some flipping back to appropriate pages to make sense of comments or progressions does unavoidably have to occur from time to time.  Regardless, The Lives of the Muses is sure to inspire those who have any interest whatsoever in the subject of musedom, and it is a book which I will certainly recommend.