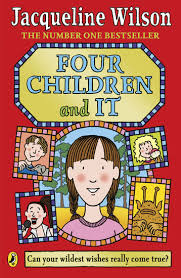 ‘Four Children and It’ by Jacqueline Wilson (Puffin)

Four Children and It by Jacqueline Wilson *****
I believe that there are two settings in which to best enjoy children’s literature.  The first is whilst basking in the sunshine on a beautifully warm day, with a long cool drink to hand, and the second is whilst curled up in front of a roaring fire in the company of a cup of tea and a purring feline.  I plumped for the latter, and began this on rather a chilly February evening.

Wilson has based her tale upon E. Nesbit’s classic (and rather beautiful) Five Children and It, which was first published in 1902.  Rather than retell the tale, Wilson’s book is a continuation of sorts, which even features Nesbit’s original child characters.  I was interested to see how it would compare to the original.

Four Children and It tells the story of brother and sister Robbie and Rosalind, their stepsister Samantha, who is known by all as Smash, and their baby sister Maudie.  Rosalind is our narrator, and she reminded me so much of myself; she took more books on holiday than clothes, and longed for uninterrupted stretches of reading, for example.  She is just the kind of Wilson heroine whom I adored as a child.  Wilson weaves such a lovely idea into the novel, where the Psammead from the original book is found by the children in a sandpit on a day trip to a local forest, and subsequently grants their wishes.

Four Children and It is just the most darling book, filled with delights, which is sure to charm everyone – young or old – who loved Nesbit’s original.  It is both marvellous and inventive, and I enjoyed it as much in adulthood as I would have done as a child.  I am sure that Nesbit herself would be flattered by, and would also very much enjoy, Wilson’s continuation of her rather lovely book.

‘The Three Sisters’ by May Sinclair (Virago)

Three Sisters by May Sinclair ***
I very much enjoyed the first Sinclair book which I read – The Life and Death of Harriett Frean – and was pleased to see several of the author’s other titles upon the Virago list.  I selected this at random on my Kindle whilst on a trip to Portsmouth, and found it rather enjoyable.

Sinclair has based this story – that of the three Cartaret sisters who live with their cold and rather tyrannical father within a lonely rectory – upon the lives of the Bronte sisters, Charlotte, Emily and Anne.  The Cartaret sisters’ father is the vicar of a parish, and he entirely disapproves of his daughters’ ‘godlessness’.  The sisters, Mary, Gwendolen and Alice, are varied in their characters and temperaments.  Alice is a rather ill and frail young woman, Gwendolen is reliable and is depended upon by almost everyone throughout, and Mary is really mysterious; we do not learn much about her until close to the end of the book.  The plot revolves almost entirely upon the relationships which the girls have with one another, and with others from the small village in which they live.

Throughout, Sinclair writes so eloquently.  The accents of the locals did seem a little overdone at times, but that is my only real criticism of her otherwise flawless writing.  The language which Sinclair uses is just as effective at charming the modern reader as I presume it ever was.  Despite the way in which I very much enjoyed most of the novel, I have only given it a three star rating due to the plot becoming rather unnecessarily silly towards the end, and its unsatisfactory ending.

The Little Company by Eleanor Dark **
I hoped that this novel would be great company on rather a long trip to Liverpool back in February.  It was the only book which I packed in my satchel, and having never read any of Dark’s work before, I suppose I took a little bit of a gamble in not taking a back-up novel of sorts.  If I am honest, I found The Little Company rather dull.  Dark’s writing is not at all bad – in fact, some of her descriptions were quite dazzling – but the entire thing just felt a little lacklustre and inconsistent.  Some parts of the novel – mainly the characters – were quite underdeveloped, and others – the political situation during the Second World War, in which this novel is set, for example – were overdone to the point of becoming repetitive.  There were no characters whom I felt able to empathise with, and I was really quite disappointed on the whole.  I doubt I will read another Dark novel again based upon my indifference for The Little Company, and so I have crossed off the other one of her books which appears on the VMC list (Lantana Lane).

‘Unsaid Things: Our Story’ by McFly

Unsaid Things: Our Story by McFly ****
There was a time when I could say that I had been to every single one of British band McFly’s tours, and saw one of their very first live concerts, when they supported Busted back in 2003.  Lately, I have missed many of their shows – for a number of reasons, including lack of someone to take with me, my dislike of their latest album (one which the band themselves are also not overly fond of), and the fact that the last time I went to see them, the place was almost entirely filled with pre-pubescent girls, who squealed horrendously throughout.  I do still have a definite softspot for them (much to the amusement of my sister), and was so pleased when I received their autobiography for Christmas.

I thought that this would be a great book to start our first readathon with, and I did manage to read it very quickly indeed.  I can categorically say that in no way was I expecting it to begin in the way it did, with the description of rather raunchy massages whilst the band were on tour in Indonesia.  Throughout, the boys are very honest indeed; it is as though they really want their fans to know all about them without holding anything back, and I really do respect this.  It is, unsurprisingly, very sad in places; I had not quite realised the extent of Tom and Dougie’s problems before beginning the book, for example.  I found it so interesting to see which of their personal experiences influenced their songs, and I loved the use of their joint perspectives throughout.  Unsaid Things: Our Story is sure to make a wonderful gift for any McFly fan, even for those who profess that they are now ‘too old’ or ‘too cool’ to listen to them.