Hurrah!  I have finally been organised enough to be able to participate in one of the wonderful yearly clubs run by Simon and Karen.  The year which they have chosen for bloggers to read books from this week is 1944, and I was so pleased that I could read and review the first book in the Gervase Fen series, The Case of the Gilded Fly by Edmund Crispin, for the occasion. 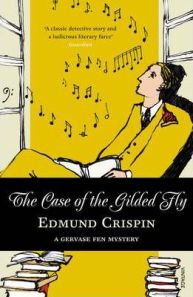 The Guardian praise Edmund Crispin’s series of crime novels as ‘a ludicrous literary farce’, and The Times call the author ‘one of the last exponents of the classical English detective story… elegant, literate, and funny.’  In this, the first novel in the series, a ‘pretty but spiteful young actress’ named Yseut Haskell, who has a ‘talent for destroying men’s lives’, is discovered dead in a University room ‘just metres from unconventional Oxford don Gervase Fen’s office.’  In rather an amusing aside, the blurb says: ‘Anyone who knew her would have shot her, but can Fen discover who could have shot her?’

The Case of the Gilded Fly begins in early 1940, in a typically British manner: ‘To the unwary traveller, Didcot signifies the imminence of his arrival at Oxford; to the more experienced, another half-hour at least of frustration.’  On such a railway journey is where we first meet English Language and Literature Professor Fen – ‘And as his only distraction was one of his own books, on the minor satirists of the eighteenth century, which he was conscientiously re-reading in order to recall what were his opinions of these persons, he became in the later stages of the journey quite profoundly unhappy’ – as well as the other protagonists.  This cast of characters is rather a diverse one.  After brief sketches of their personalities and professions, Crispin discusses them for the first time as a group: ‘By Thursday, 11 October, they were all in Oxford.  And within the week that followed three of those eleven died by violence.’

Crispin controls his writing and characters wonderfully.  The opening description of Yseut gives her character a complexity, and sets the reader – like her acquaintances – against her rather quickly.  Crispin writes: ‘To a considerable extent we are all of necessity preoccupied with ourselves, but with her the preoccupation was exclusive, and largely of a sexual nature into the bargain.  She was still young – twenty-five or so – with full breasts and hips a little crudely emphasized by the clothes she wore, and a head of magnificent and much cared-for red hair.  There, however – at least as far as the majority of people were concerned – her claims to attractiveness ended.  Her features, pretty enough in a conventional way, bore little hints of the character within – a trifle of selfishness, a trifle of conceit; her conversation was intellectually pretentious and empty; her attitude to the other sex was too outspokenly come-hither to please more than a very few of them, and her attitude to her own malicious and spiteful.’

The Case of the Gilded Fly is both intelligently written and highly immersive.  Whilst not my favourite in the Gervase Fen series – that accolade has to be given to the magnificent The Moving Toyshop – The Case of the Gilded Fly, whilst stylistically different in some ways, serves as a marvellous introduction to the series.  Crispin sets it up so that everyone has a grievance against Yseut, and the reader is consequently left guessing who could have perpetrated the crime, when all have a motive.

The sense of place here has been well captured, too, as well as the early Second World War time period in which it is set.  Crispin notes that the college admissions at Oxford University have been greatly affected, with many students going off to fight.  The blackout conditions are also in place when Yseut is murdered, which does not help matters; her death is first ruled as a suicide, until Fen and an Inspector from the local police force probe more deeply and discover several clues.  The novel does not throw up as many red herrings as I had come to expect from the later books in the series; it is more of a measured and meditative novel.  I did correctly guess one of the elements, but found it incredibly well pieced together nonetheless.