I have been listening to and discovering some fabulous music of late, so rather than post my usual Sunday song, I thought that I would make a playlist.  For each artist, I have written a little description, and each song links to a YouTube video.  I hope you find something here which you love! 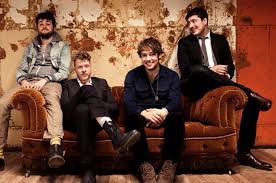 1. Believe – Mumford and Sons; the newest offering from London folk-rockers, this song contains – shock horror! – no banjos.  The band are moving in an exciting new direction, and I can’t wait to hear what their forthcoming album sounds like.
2. Cope – Manchester Orchestra; an incredible post-rock band, who have released some stunning albums.  Lead singer Andy Hull has one of my favourite voices in music.
3. Drown So I Can Watch – The Twilight Sad; moody and brilliant Scottish indie rockers.  I absolutely adore lead singer James Graham’s vocals.
4. Black Eye View – Heartwork; rather coolly, I know this guy.  His music is angsty, honest and, above all, beautifully constructed; a definite for fans of Bright Eyes/Conor Oberst, City and Colour and Noah Gundersen.
5. No Room in Frame – Death Cab for Cutie; one of the songs from Death Cab’s forthcoming ‘Kintsugi’ album, which I could not be more excited about if I tried.  Just marvellous.

6. Tickets for Teasing – Le Wrens; the younger brother and sister of the incredibly talented Noah Gundersen, Le Wrens write beautiful, clear folksy songs, which I could happily listen to all day.
7.  Divorce and the American South – Aaron West and the Roaring Twenties; I probably wouldn’t have heard this if it hadn’t been for a recommendation from Heartwork himself (cheers, Dan).  Aaron West is the frontman of band The Wonder Years, but I far prefer his solo stuff.  Emotional acoustic songs with intelligent lyrics – what’s not to like?
8. Quiet Little Voices – We Were Promised Jetpacks; more Scottish indie.  This song is incredibly catchy, and if you like it, you’re sure to love their other stuff.  They also have one of my favourite band names, ever.
9. Lordy May – Boy & Bear; an absolutely lovely song by an Australian band.  There are hints of early Mumford & Sons here, but the boys manage to make a song which is original and keeps you coming back for more.

10. Pompeii – Bastille; an old one, but a good one.  I don’t dance as a rule, but this makes me want to throw caution to the wind and start bopping.
11. Girl of Mine – Jesse Gabriel; half of fabulous New York-based band The Narrative, Gabriel’s solo project is a thing of wonder.  He is also one of the nicest guys ever.
12. Grand Optimist – City and Colour; Dallas Green, one of Canadian band Alexisonfire’s frontmen, is an incredible singer-songwriter and this is one of my favourites of his.  Gorgeous.