We begin with a relatively recent favourite of mine for this edition of the Book Trail, and consequently come across some fantastic looking tomes related to it on Goodreads. 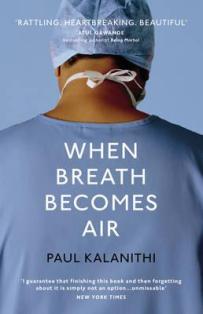 ‘What makes a virtuous and meaningful life? Paul Kalanithi believed that the answer lay in medicine’s most demanding specialization, neurosurgery. Here are patients at their life’s most critical moment. Here he worked in the most critical place for human identity, the brain. What is it like to do that every day; and what happens when life is catastrophically interrupted?  When Breath Becomes Air is an unforgettable reflection on the practice of medicine and the relationship between doctor and patient, from a gifted writer who became both.‘

2. Wondering Who You Are: A Memoir by Sonya Lea
‘In the twenty-third year of their marriage, Sonya Lea’s husband, Richard, went in for surgery to treat a rare appendix cancer. When he came out, he had no recollection of their life together: how they met, their wedding day, the births of their two children. All of it was gone, along with the rockier parts of their past—her drinking, his anger. Richard could now hardly speak, emote, or create memories from moment to moment. Who he’d been no longer was.  Wondering Who You Are braids the story of Sonya and Richard’s relationship, those memories that he could no longer conjure, with an account of his fateful days in the hospital—the internal bleeding, the near-death experience, and the eventual traumatic brain injury. It follows the couple through his recovery as they struggle with his treatment, and through a marriage no longer grounded on decades of shared experience. As they build a fresh life together, as Richard develops a new personality, Sonya is forced to question her own assumptions, beliefs, and desires, her place in the marriage and her way of being in the world. With radical candor, Sonya Lea has written a memoir that is both a powerful look at perseverance in the face of trauma and a surprising exploration into what lies beyond our fragile identities.’

3. Lord Fear: A Memoir by Lucas Mann
‘Lucas Mann was only thirteen years old when his brother Josh—charismatic and ambitious, funny and sadistic, violent and vulnerable—died of a heroin overdose. Although his brief life is ultimately unknowable, Josh is both a presence and an absence in the author’s life that will not remain unclaimed. As Josh’s story is told in kaleidoscopic shards of memories assembled from interviews with his friends and family, as well as from the raw material of his journals, a revealing, startling portrait unfolds. At the same time, Mann pulls back to examine his own complicated feelings and motives for recovering memories of his brother’s life, searching for a balance between the tension of inevitability and the what ifs that beg to be asked. Through his investigation, Mann also comes to redefine his own place in a family whose narrative is bisected by the tragic loss.  Unstinting in its honesty, captivating in its form, and profound in its conclusions, Lord Fear more than confirms the promise of Mann’s earlier book, Class A; with it, he is poised to enter the ranks of the best young writers of his generation.‘

4. Stir: My Broken Brain and the Meals That Brought Me Home by Jessica Fechtor
‘At 28, Jessica Fechtor was happily immersed in graduate school and her young marriage, and thinking about starting a family. Then one day, she went for a run and an aneurysm burst in her brain. She nearly died. She lost her sense of smell, the sight in her left eye, and was forced to the sidelines of the life she loved.  Jessica’s journey to recovery began in the kitchen as soon as she was able to stand at the stovetop and stir. There, she drew strength from the restorative power of cooking and baking. Written with intelligence, humor, and warmth, Stir is a heartfelt examination of what it means to nourish and be nourished.”   Woven throughout the narrative are 27 recipes for dishes that comfort and delight. For readers of M.F.K.Fisher, Molly Wizenberg, and Tamar Adler, as well as Oliver Sacks, Jill Bolte Taylor, and Susannah Cahalan, Stir is sure to inspire, and send you straight to the kitchen.‘

5. A History of Food in 100 Recipes by William Sitwell 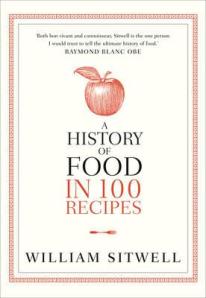 ‘In today’s 24-hour consumer society, it is easy to get what we desire to eat. But do we know where these everyday recipes came from, who invented them, and using what techniques? This book provides a colourful and entertaining journey through the history of cuisine, celebrating the world’s greatest dishes.‘

6. The Cassoulet Saved Our Marriage: True Tales of Food, Family, and How We Learn to Eat by Caroline Grant
‘Without mantras or manifestos, 29 writers serve up sharp, sweet, and candid memories; salty irreverence; and delicious original recipes. Food is so much more than what we eat. The Cassoulet Saved Our Marriage is an anthology of original essays about how we learn (and relearn) to eat, and how pivotal food is beyond the table.‘ 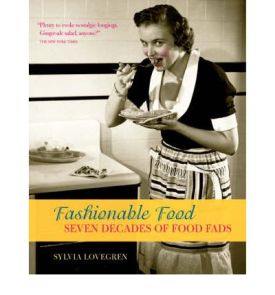 7. Fashionable Food: Seven Decades of Food Fads by Sylvia Lovegren
‘Though the Roaring Twenties call to mind images of flappers dancing the Charleston and gangsters dispensing moonshine in back rooms, Sylvia Lovegren here playfully reminds us what these characters ate for dinner: Banana and Popcorn Salad. Like fashions and fads, food—even bad food—has a history, and Lovegren’s Fashionable Food is quite literally a cookbook of the American past.  Well researched and delightfully illustrated, this collection of faddish recipes from the 1920s to the 1990s is a decade-by-decade tour of a hungry American century. From the Three P’s Salad—that’s peas, pickles, and peanuts—of the post-World War I era to the Fruit Cocktail and Spam Buffet Party loaf—all the rage in the ultra-modern 1950s, when cooking from a can epitomized culinary sophistication—Fashionable Food details the origins of these curious delicacies. In two chapters devoted to “exotic foods of the East,” for example, Lovegren explores the long American love affair with Chinese food and the social status conferred upon anyone chic enough to eat pu-pu platters from Polynesia. Throughout, Lovegren supplements recipes—some mouth-watering, some appalling—from classic cookbooks and family magazines, with humorous anecdotes that chronicle how society and kitchen technology influenced the way we lived and how we ate.  Equal parts American and culinary history, Fashionable Food examines our collective past from the kitchen counter. Even if it’s been a while since you last had Tang Pie and your fondue set is collecting dust in the back of the cupboard, Fashionable Food will inspire, entertain, and inform.‘

8. Tea With Jane Austen by Kim Wilson
‘Who would not want to sit down with Jane Austen and join her in a cup of tea? This book shares the secrets of one of her favourite rituals. Each chapter includes a description of how tea was taken at a particular place or time of day, along with history, recipes, excerpts from Austen’s novels and letters and illustrations from the time.‘

Have you read any of these?  Which do you think I should attempt to get to first?