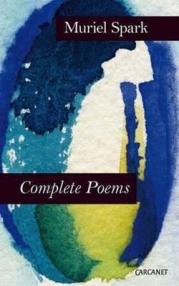 The Complete Poems by Muriel Spark ***
I have read a lot of Spark’s fiction, but none of her poetry; it seemed obvious, therefore, to pick up a copy of her Complete Poems and read it during the month of her centenary. The poems here are not chronologically ordered, which annoyed me a little; I like to see how poets evolve over time, particularly over the decades in which Spark wrote. The content here is quite varied; Spark writes extensively about writing and London, which I was expecting, but other poems deal with catching bad colds, and leaning over old walls, which I perhaps was not.

Spark’s poems are witty and clever, but the collection did not feel like a coherent one to me. Perhaps this is because of the lack of chronological ordering; had it been structured in this way, and one could see the progression of Spark’s poetic voice and the continuation of themes, it would have worked better. Sadly, some of the poems here were a little silly and juvenile for my particular taste, and I was largely indifferent to the collection as a whole; very few of these poems really stood out.

The Sun and Her Flowers by Rupi Kaur **

I downloaded a copy of Rupi Kaur’s The Sun and Her Flowers from my library’s online catalogue, mainly to see what all the hype was about. I am one of the few, it seems, that hasn’t read her debut poetry collection, Milk and Honey, and doubt that I will seek out a copy after my experience with this, her second book.

Firstly, I wasn’t at all a fan of the illustrations, and do not feel as though they have a place within poetry anyway; they detract somewhat from the actual writing, and make it feel a bit gimmicky. The Sun and Her Flowers largely felt fragmented to me, like a series of quite random thoughts had been quickly jotted down. It felt unfinished. I found the collection quite banal at times, because the same themes are repeated over and over again; the two overriding themes are ‘woe is me’, and ‘I am strong and powerful’. Whilst I enjoyed a few of these poems, I felt indifferent to the vast majority of them. It is not the kind of poetry which grabs you and doesn’t let go; yes, it passes a couple of hours, but I do not feel as though I really got anything of worth from the collection. I perhaps would have enjoyed it more before I had discovered the likes of Sylvia Plath, or had I read it whilst in my early teens. It had an overarching ‘Tumblr’ feel to it.

Also, as far as I’m concerned, the following is not a poem (yet it is in Kaur’s book): ‘you do not just wake up and become the butterfly’.