Sally Beauman’s Rebecca’s Tale, a sequel to du Maurier’s haunting Rebecca, is a book which I have been looking forward to reading for years.  It has proved quite an elusive title to locate however, so I had not been able to find it in any bookshops, and thought that my du Maurier December project gave me the perfect excuse to order a copy.  I was incredibly intrigued to see where Beauman would take the story.

Rebecca’s Tale was published in 2001 and is largely set in 1951, twenty years after the inquest which ruled that Rebecca’s death was a suicide.  The novel

is split into four parts, all of which follow a different character; friend of Rebecca’s Arthur Julyan, historian Terence Grey, the diary of Rebecca herself, and Ellie, Arthur Julyan’s daughter. Each of the characters writing in 1951 is aiming to discover the truth of Rebecca’s death in his or her own way. One imagines that this sequel of sorts, with its opening line the same as the original’s, could not really have begun in any other way.

In his introductory chapter, Julyan, a former army colonel and retired magistrate, states: ‘I’ve concealed the truth about Rebecca de Winter for too long…  I decided to record, for the first time, and leaving nothing out, everything I know about Manderley, the de Winters, Rebecca, her mysterious life and her mysterious death’.  He goes on to rehash many of the details from du Maurier’s original, none of which I will relate here for fear of giving away spoilers to those of you who have not yet read Rebecca.

Julyan lives in Kerrith, the ‘nearest small town to Manderley’, and rather adored Rebecca when the two knew one another: ‘I was Rebecca’s friend; I knew, better than anyone, how well Rebecca had covered her tracks, how secretive she’d been’.  He goes on to say: ‘I’ve always believed that you cannot understand Rebecca and what she became unless you understand the family she married into.  I’ve always felt that if I were searching for clues to Rebecca, Manderley was the first place to look’.  He cites himself as the ‘prime source’ of finding out what happened to her, particularly now that her husband Maxim de Winter has passed away.  Through Julyan, we meet both Maxim and Beatrice de Winter as children – although it must be said that the two are not overly believable when Beauman writes about them.  Danvers, Rebecca’s formidable confidante of sorts, and an ardent worshipper of the young woman, has disappeared without a trace.

Julyan is sent a package containing a notebook with the words, ‘in a child’s spiky hand, the tail of the last letter curling down the page in a long punning flourish.  Rebecca’s Tale‘.  His portion of the novel is largely told in retrospect.  Julyan’s narrative voice feels rather overdone at times; feminine phrasing creeps in from time to time, and there is nothing presented to us which is overly masculine within his character.  He tends to be a little pompous at times; unnecessarily so, one cannot help but think.  This aspect of his personality becomes more and more grating as the novel goes on.  Historian Terence Grey narrates the second part of the novel and is, says Julyan, ‘crucial to my Rebecca “quest”‘.  Whilst I can see why the perspectives of both Grey and Julyan’s daughter Ellie have been used, both of them feel rather overdone on the whole, and consequently I did not grow to like any of the characters.

The plentiful positive reviews lavished across the cover of Rebecca’s Tale led me to believe that I would very much enjoy the book.  I had rather varied feelings about it though, and whilst I very much enjoyed some sections, I really disliked others.  On the back of the novel, a quote from author Linda Grant proclaims the following: ‘While both du Maurier and Beauman are great storytellers, Beauman really is the better prose writer’.  I did not personally agree with this at all.  Comparably, I do not think Beauman’s writing is anywhere near as strong nor as vivid as du Maurier’s, and she also does not make her male narrative voices sound realistic, something which du Maurier herself is wonderful at.

Rebecca’s Tale is, to an extent, well written, and it does become more absorbing as it goes on, but when a new narrative perspective is introduced – particularly with regard to that of Terence Grey’s – a lot of the details which Julyan has already related are repeated for no particular reason.  This would be relatively bearable, were it not for the fact that the same phrases are used, often in their entirety.  Speaking of the title which Rebecca wrote in her notebook, for example, Grey describes it as a ‘childish punning flourish’, rather than Julyan’s aforementioned ‘long punning flourish’.  Grey’s voice also feels even more effeminate than Julyan’s.

I feel that I do not have to write that Rebecca’s Tale is nowhere near as compelling as Rebecca.  Whilst I admire what Beauman has done in creating a sequel to a much-loved and rather phenomenal novel, I do not see why her effort had to be quite so repetitive.  Whilst her novel is well paced, several of the elements are bogged down by superfluous – and again, often repetitive – descriptions, and less interesting aspects of the plot.  Disappointingly, I did guess a lot of the twists and turns within the story.  One of the strengths of Rebecca’s Tale was Beauman’s original blending of the original characters with her new creations.  Another is the way in which some depth was added to the shadowy past of Rebecca herself.

Rebecca’s Tale is an interesting read for anyone who has enjoyed Rebecca, but the conclusions which Beauman draws are often far too obvious, quite unsatisfactory, and sometimes are not anywhere near subtle enough to work.  All in all, the very idea of a sequel to Rebecca, that much adored of Gothic novels, is rather inviting, but it is not entirely necessary.  As a reader and ardent fan of her work, I respect du Maurier’s decision to end Rebecca in the way in which she did.  Whilst it is pleasing that another author has taken to the helm, I cannot convince myself that du Maurier would have utilised many of the same elements as Beauman has in Rebecca’s Tale.

For the first day of my du Maurier December project, what could be better than kicking off with musings about Daphne du Maurier’s most famous and much-loved novel worldwide, Rebecca?  The Rebecca Notebook and Other Memories – du Maurier’s final work – was first published in 1981, and was reissued by Virago in 2005.  According to its blurb, The Rebecca Notebook provides ‘an unparalleled insight into the mastery of a writer’s craft and the inner vision that made du Maurier a household name’.

Whilst The Rebecca Notebook is interesting enough to read on its own, it goes without saying that it is best as a companion volume to Rebecca.  Much of the ‘Rebecca Notebook’ section describes how du Maurier came to write her famous Gothic novel, ‘tracing its origins, developments and the directions it might have taken’.  After this, a collection of essays, all written about a wealth of rather different subjects, can be found.  Aside from the original musings about Rebecca, which was first published in 1938, much of the material within The Rebecca Notebook and Other Memories was penned towards the end of du Maurier’s writing career.

The preface to the Virago edition is written by Alison Light.  Throughout, she talks of du Maurier’s discovery of her beloved Menabilly, the house which inspired Manderley in Rebecca, and discusses the way in which: ‘Fans of du Maurier’s fiction know that in her world disenchantment is the price we pay for the magic: “it is the very insecurity of the love which makes the passion strong”‘.  Light also tells us that ‘this volume of short pieces about her family, her life and beliefs, is prompted, like so many of her stories, by the desire to reanimate the past’.  Du Maurier’s own introduction to her notebooks is eloquent and informative.

Du Maurier began to conceive her ideas for Rebecca whilst living in Alexandria, where her husband was stationed.  In The Rebecca Notebook and The Rebecca Epilogue, it is possible to see the original chapter outlines for the novel, and the edits which were made from notebook to novel are fascinating to compare.  It is incredibly interesting to see what du Maurier altered or removed altogether, for whatever reason. 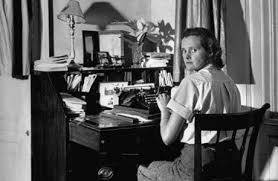 The Rebecca Notebook is quite a slim volume, running as it does to just 180 pages.  Despite this, it is crammed to the brim with fascinating ideas and musings upon many subjects.  The extra material which has been included is comprised of eleven essays and three poems, each of which has been carefully crafted and thoughtfully written.  The themes of du Maurier’s essays range from her cousins, the Llewellyn-Davies boys, upon whom the young Darlings in J.M. Barrie’s Peter Pan were based, to moving away from Menabilly and speaking of her widowhood.  She talks of mythology, Shakespeare, the use of tragedic devices in novels, the concept of heredity, religion and grief.

Of her essays, she writes: ‘The pieces in the present section have nothing to do with my imagination, but with the conscious self, the person who is Me.  This may sound, and probably is, conceited, but I make no apology for it; they were written at different times throughout my life because I felt strongly about the various subjects, and so was impelled to put my thoughts on paper’.  The essays are relatively short, but they are perfectly formed, and can be dipped in and out of.  When writing, du Maurier never wastes her words, and as she does not repeat herself at all, each sentence she crafts feels both fresh and original.

It goes without saying that the writing here is beautiful, particularly when it comes to du Maurier’s descriptions.  In ‘The House of Secrets’, which was written in 1946, she writes the following regarding her discovery of Menabilly: ‘It was an afternoon in late autumn, the first time I tried to find the house.  October, November, the month escapes me.  But in the West Country autumn can make herself a witch, and place a spell upon the walker.  The trees were golden brown, the hydrangeas had massive heads still blue and untouched by flecks of wistful grey, and I would set forth at three of an afternoon with foolish notions of August still in my head’.  She is rather amusing at times too, and her wit shines through, particularly in the essay entitled ‘Sunday’ (1978): ‘[Sunday is a] day for privacy, except for neighbouring cattle and sheep, with which I am on excellent terms, speaking to them in their own language.  (I baa better than I moo, nevertheless they appear to understand the drift of my conversation; even Romany of Till, the bull, acknowledges my presence with a courteous inclination of his horns)’.

Du Maurier’s poetry, too, is lovely.  The following extract is taken from ‘The Writer’ (1926):

“Mine is the silence
And the quiet gloom
of a clock ticking
In an empty room,
The scratch of a pen,
Ink-pot and paper,
And the patter of the rain.
Nothing but this as long as I am able,
Firelight – and a chair, and a table.”

The Rebecca Notebook and Other Memories is a great accompaniment to Rebecca, and is sure to delight anyone who has so enjoyed the titular novel.  The whole has been so well put together, and as well as examining the craft of writing, it gives a real insight as to what du Maurier was like as an individual when viewed away from her craft.  She is both candid and modest throughout and, one cannot help but think, would have been quite a joy to know.