Marghanita Laski’s Tory Heaven or Thunder on the Right is one of the new Persephone titles for Spring 2018.  Four of Laski’s other novels have already been published by Persephone – The Victorian Chaise-Longue (number 6), Little Boy Lost (28), The Village (52), and To Bed with Grand Music (86).  It seems entirely fitting for this newest Laski publication to appear in 2018; although the satirical novel first came out in 1948, many fascinating parallels can be drawn between it and the current governance of the ‘dis-United Kingdom’.

Tory Heaven, as I shall refer to the novel from hereon in, has been prefaced by historian David Kynaston, the author of many books on British social history.  Kynaston, as one would expect, begins his preface by recapping the feeling in Britain directly after the Second World War; the middle classes, no longer able to afford annual holidays and library subscriptions, found themselves ‘increasingly aggrieved’.  Kynaston writes of the middle class longing for the ‘overthrow of Clement Atlee’s government, and a return to the familiar Tory certainties of social hierarchy, of rigid class distinctions, and of almost unquestioned privilege and entitlement for those born on the right side of the tracks.’

In Tory Heaven, Laski ‘bleakly imagines Britain under right-wing Tory rule, enduring a rigidly hierarchical system in which every citizen is graded A, B, C, D or E and only the As have any privileges: everyone else is downtrodden in varying degrees.’  These five classes are later said to be those which society ‘naturally comprises.  Each class has, of course, its own distinctive outlook and way of life and, with those, different privileges and compensations.  People like to know where they are, you see, and they like to know where other people are, too.’  Laski chooses not to take a side in the tumultuous political conditions which she writes of; Kynaston believes that ‘she is too subtle and elegant a writer to express her own horror at this grotesque turning back of the flock.  Instead, like the best political satirists from Swift to Orwell, she leaves it entirely to others to draw out the lessons of her story.  Or as Ralph Straus put it in the Sunday Times: “Conservatives with high blood pressure are advised not to read it.”‘

Tory Heaven opens: ‘It is difficult after the passage of years to recall the precise emotions with which the population of England switched on their radio sets one summer evening in 1945 and prepared to hear that the Tories had won the General Election.’  We are introduced, at this juncture, to five rather different characters, not all of whom are protagonists, but each one has been crafted for a very particular reason or outcome in the novel.  These five are currently in Singapore, awaiting transport back to England.  There is privileged James Leigh-Smith, the central character, and ‘our hero’, who drifts about from one place and one job to another; Martin Wetherall, academically brilliant, and in Singapore in order to ‘study the effects of submarine blast on embryonic barnacle-geese’; Penelope Bosworth, the eldest daughter of an Earl, who has a lack of dowry and a ‘mousy appearance’, both prohibiting her from attracting a husband; Ughtred Thicknesse, born into a very old family who have lost all of their prior fortune; and Janice Brown, ‘very blonde and very beautiful and chance remarks she let fall seemed to indicate that at the time of the debacle she had been staying at Raffles Hotel in a double room’.

James is shown as gloomy and disgruntled from the novel’s outset.  Laski writes: ‘Ever since he’d left Oxford and started his enforced tour of the outposts of Empire, rude Colonials had everywhere failed to appreciate that they were being confronted with that perfect flowering of the class system, an English gentleman.’  Soon after his musings about the lack of personal – and, he feels, prerogative – appreciation which exists around his person, he and the fellow four characters are transported back to England on that great bastion of Empire, the P&O liner.  Much to James’ delight – at the outset, at least – he is returned to a country in which he is the highest class of citizen.  For the As, London is all clubs and tailors, pink gin and wingback armchairs, the best hotels and Sheraton desks.   For the privileged class, England becomes old-fashioned and “proper”, and James thinks it wonderful: ‘In some peculiar way this new England seemed – not strange, but wholly familiar to him, like a dream so persistent in his subconscious that he welcomed it as part of himself.’

At first, a Labour victory is announced, but after ten days, the Tories take over.  When he returns back to London, James becomes wholly satisfied, told as he is that: ‘The one thing everyone had seemed anxious to assure him since was that whatever kind of government England now had, it wasn’t a Socialist one.’  In a tongue-in-cheek fashion, after James asked Ughtred what has happened to assure the new government’s place, Laski writes: ‘Apparently M.I.5 embarked on an anti-Communist drive in 1946, and being quite unable to distinguish between Intellectuals and Communists, cleared out both.’  The group of politicians then joined up with M.I.5 and the police, named ‘themselves finally and decisively the Tory party’, and ‘went into action’.

Tory Heaven is wickedly funny, and at its centre is such a clever idea.  Laski, as always, writes fantastically, and each and every step of such a nightmare has been thought about and followed through.  The ideas which are shown here, of a totalitarian government favouring their own kind and eschewing everyone else as not worthy, are as scary as they are familiar.  They have, as James is told, ‘elected to do away with all that nasty equality bosh’.

Through the framework which Laski has constructed, she is able to make use of a whole host of social problems entrenched within society.  She demonstrates ways in which such a system is not at all favourable, even to those who find themselves within the privileged class.  Thoughtful and engaging, witty and smart, and entirely shrewd in its depictions, Tory Heaven throws up so many valid questions about the way countries are governed, and the ways in which some people are treated as entirely different to others merely due to their ancestry, or their vast fortunes.

John Steinbeck’s The Moon is Down was first published in 1942.  Its title comes from Shakespeare’s Macbeth, and on reflection, it suits the piece marvellously.  Unlike much of Steinbeck’s other work, no concrete setting has been decided upon within The Moon is Down.  Even the country in which the action happens is ambiguous, with many believing that it is set somewhere in Scandinavia.

The informative afterword to the novella, which has been written by Donald V. Coers, tells the reader that in The Moon is Down, Steinbeck ‘had decided to write a work of fiction using what he had learned about the psychological effects of enemy occupation upon the populace of conquered nations’.  In doing so, Coers goes on to say that Steinbeck ‘refused to adopt the contemporary Teutonic stereotype’ for either his setting or his protagonists.  He also believes that The Moon is Down ‘demonstrates the power of ideas’, and one can only concur with this.

The first sentence is striking, and leads on wonderfully to the main thread of the story: ‘By ten forty-five it was all over.  The town was occupied, the defenders defeated, and the war finished’.  At the beginning of the novella, six of the soldiers who have been involved in a brutal spur-of-the-moment shootout ‘became dead riddled bundles’, and three others are deemed ‘half-dead riddled bundles’.  This repetition of violence makes it all the more chilling.

Steinbeck goes on to write about the way in which, in the occupied town, ‘The days and the weeks dragged on, and the months dragged on…  The people of the conquered country setled in a slow, silent, waiting revenge’.  Steinbeck exemplifies the solidarity of the community throughout, particularly with regard to the attitudes rallied against the outsiders.    The community in question is centered around mining, and the colonel who infiltrates the town tells the Mayor that his people ‘will be in danger if they are rebellious.  We must get the coal, you see.  Our leaders do not tell us how; they order us to get it…  You must make them do the work and thus keep them safe’.  The Mayor responds that the ‘authority is the town… [and] when a direction is set, we all act together’.  The point of view of both sides has been considered throughout, a technique which works marvellously in a novella, and which makes the whole an incredibly rich read despite its deceptively short length. 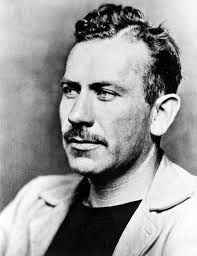 As with Steinbeck’s other work, I was struck immediately by the quality of his writing and his deft skill, both at building characters and rousing compassion for them.  The scenes which he crafts are unfailingly vivid, and everything which he turns his hand to describing comes to life before the very eyes: ‘Beside the fireplace old Doctor Winter sat, beared and simple and benign, historian and physician to the town…  Doctor Winter was a man so simple that only a profound man would know him as profound’.  Joseph, the serving-man belonging to the Mayor, on the other hand, had a life ‘so complicated that only a profound man would know him to be simple’.  The divisions, like this one, which he creates between his characters have all been so marvellously realised: ‘Joseph had tried carrying Doctor Winter’s remarks below-stairs before and it had always ended the same: Annie always discovered them to be nonsense’.  Such juxtapositions, which can be found at various points throughout the novella, allow Steinbeck to make his work and his characters so distinct.  His perceptions in such matters are always intelligent.

The Moon is Down is a sage novella, written by a man who is a master at creating believable dialogue and conversational patterns between his characters.  He captures their thoughts and feelings in the most sublime of manners; it feels, in consequence, as though he knows them inside out.  The way in which he captures the foreboding which hovers above the town is stunning, and the entire novella is eminently human and thought-provoking.