Chaos of the Night: Women’s Poetry and Verse of the Second World War, edited by Catherine Reilly **** 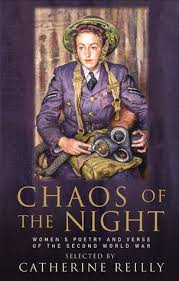 Chaos of the Night follows on from the wonderful Scars Upon My Heart, but deals instead this time with women’s poetry from the Second World War.  Being the history nerd that I am, I was so excited to become acquainted with more war poetry written by women.  87 poets are collected here in all, recording ‘the devastating upheavals’ which the Second World War caused ‘with its attendant partings, separations, [and] bereavements…  they [the collected poets] write of the fear of air attacks, of children’s responses to evacuation, of their horror of Nazi persecution.  But they convey too the sweet expectation of peace, of reunion and rebirth…  [The book is] a moving testament to women’s search for a better future’.  As in Scars Upon My Heart, each poet in the collection is arranged by their surname.

I love the format of this book, particularly with regard to the use of different nationalities and the many perspectives which can be found within its pages.  Like Scars Upon My Heart, Chaos of the Night is an incredibly important collection of a largely overlooked portion of war poetry, and it is a book of real value, particularly from the standpoint of women’s experiences in history.  There are many poets within its pages whom I want to read more work by, and I was surprised as to how modern some of the prose was.  I would recommend this to anyone who has any interest whatsoever in wartime history, or in the writing of women.

Cottage Poems by Patrick Bronte
I purchased a marvellous collection of the complete works of the Bronte sisters some time ago, and twelve of their father Patrick’s poems were included within it under this title.  I was so intrigued to see how his work would compare to that of his daughters.  Most of the rhymes within Cottage Poems were lovely, and a lot of thought has clearly been put into them.  His verses too are rather nice:

“To all my heart is vivid and true,
But glowa with ardent love for you;
Though absent, still you rise in view,
And talk and smile
Whilst heavenly themes, for ever new,
Our cares beguile.”

Stories are woven throughout each poem, all of them quiet but each of them seamless in their progression.  Whilst none of Patrick Bronte’s poems are sadly overly memorable, this is a sweet little collection which encompasses many themes, and which is sure to appeal to those who love the work of his three daughters.