Published in 2007, and subsequently shortlisted for 2007’s Man Booker Prize, so much of The Reluctant Fundamentalist is still timely and relevant.  In fact, I can hardly put it better than the official blurb, which states: ‘Challenging, mysterious and thrillingly tense, Mohsin Hamid’s masterly The Reluctant Fundamentalist is a vital read teeming with questions and ideas about some of the most pressing issues of today’s globalised, fractured world. ‘ 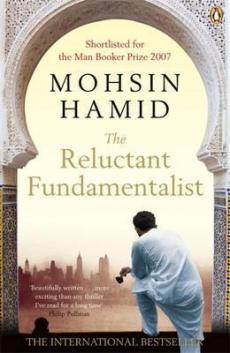 The Reluctant Fundamentalist is both spellbinding and important.  It opens in a cafe in Lahore, the capital of the Punjab province in Pakistan, when a ‘mysterious stranger’ comes to sit at your table – for the novel is addressed to ‘you’, an unnamed character from the Western world, who is not given a name or identity of their own.  ‘Invited to join him for tea, you learn his name and what led this speaker of immaculate English to seek you out.  For he is more worldly than you might expect…  He knows the West better than you do.  And as he tells you his story, of how he embraced the Western dream – and a Western woman – and how both betrayed him, so the night darkens.  Then the true reason for your meeting becomes abundantly clear…’.

Hamid’s writing is sometimes rather spare, but if anything, this gives it more power.  In essence, we are party to a one-sided conversation.  We are lulled into the realistic, fluid voice of the narrator, which has been beautifully crafted, and that makes the horrors which he sometimes discusses all the more poignant and shocking.  The inclusion of the second-person narrative perspective is incredibly immersive, and allows us, the reader, to feel an incredible range of emotions whilst reading.  The way in which the conversation takes place over a single day, is a simple yet effective tool which adds more immediacy to the whole.

The Reluctant Fundamentalist is the first of Hamid’s books which I have read, but it will by no means be the last.  It is beautifully sculpted, and holds so much importance within its pages.  The multilayered approach, and the way in which interconnected threads and stories weave in and out of the narrative, has been used to great effect.  There is a strength and quiet power to The Reluctant Fundamentalist, as well as incredibly memorable scenes and turns of phrase; the combination of its briefness, depth, and memorability render it nothing short of a modern masterpiece.