I had previously read, and very much enjoyed, Emma Smith’s The Far Cry, which was reprinted by Persephone in 2002.  I was keen to read more of Smith’s work, and ordered a gorgeous old paperback version of No Way of Telling, a novel which she wrote for children.  It stood out to me as a seasonal choice which I could read over the winter season. 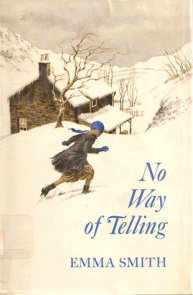 The protagonist of No Way of Telling is a young, and highly likeable, girl named Amy Bowen, who lives with her grandmother in rural Radnorshire in Wales, two miles away from the nearest village, and five from her school.  When the novel begins, it is wintertime, and a terrible snowstorm is on its way.  Once Amy returns from school, she and her grandmother stay inside, ‘safely-happy in the warmth of their mountain cottage while the blizzard raged outside.’  All of a sudden, ‘the door broke open, and there stood a shape so big that to Amy it was more of a monster than a man.  He said nothing, only grabbed some food and disappeared again into the stormy darkness.’  He is like something from ‘a bad dream, except that Amy and Mrs Bowen knew they were both awake.’  Grandmother and granddaughter are fearful; they wonder who he is, if he will return, and whether he is ‘hunter or hunted’.  They have, at this point, ‘no way of telling’.

So much attention has been paid to the rural surroundings throughout the novel.  Smith’s descriptions, particularly of the snowy landscape, are glorious.  When the blizzard begins, and Amy is walking home, she writes: ‘The flakes were big and loose, soft white lumps of snow blowing across sideways on the wind as though they too were in haste to get home.’  She goes on to describe the effects which such weather has on her young protagonist: ‘Snow, she thought, was a marvel – it was indeed!  Snow was like nothing else: it changed the world, the whole of life, in a matter of moments.  Not only the shapes of trees and grasses were changed but daily habits – even laws lost their power and had no meaning when snow fell.’  Throughout, Smith explores the weather, and the nuances in the way it changes, fantastically.  As Amy walks on, she captures the fear and disorientation which such a blizzard can bring with it: ‘There was nothing to see; nothing but a white swarming nothingness.  The hill that rose up in front of her was invisible and the snow itself had altered.  The flakes were smaller now and driving harder.  She was uncertain of how far she had come, uncertain of exactly where she was; and as she realized this she felt a conscious movement inside her, the sudden squeeze of sudden fright.’

There is a dark thread which weaves its way through the entire novel.  Whilst it is aimed at children, the writing is not at all simplified, and Smith does not intentionally hide things from her readers.  The mystery element, of the man’s identity and the appearance of two men who appear afterwards, has been well handled.  The denouement of No Way of Telling is wonderful; it both surprises and satisfies in equal measure.  Smith has created a wonderfully palpable tension in her novel.

No Way of Telling is the perfect wintry read.  Smith was shortlisted for the 1973 Carnegie Medal for this novel, and one can see why almost immediately.  Her story is compelling, her characters wonderfully realistic, and her prose layered and intelligent.  She explores the relationship between the young girl and her grandmother, and the way in which the appearance of the stranger impacts upon their daily life.  Smith’s narrative style is engaging, and her two protagonists feel three-dimensional.  The novel appealed to me greatly as an adult reader, and had it been published as an adult novel, I would not have been at all disappointed with it.