I have read, and very much enjoyed, almost all of Miriam Toews’ books to date, and was keen to pick up her newest novel, Women Talking.  Lauren Groff, one of my all-time favourite authors, declares the novel ‘an astonishment, a volcano of a novel…  No other book I’ve read in the past year has spoken so lucidly about our current moment, and yet none has felt so timeless.’

Women Talking is a fictional representation of a true and shocking story; it is Toews’ ‘imagined response to these real events’.  In the remote Mennonite community of Melotschina in Bolivia, between 2005 and 2009, more than one hundred girls and women were ‘knocked unconscious and raped repeatedly by what many thought were ghosts or demons’.  The women’s accounts were ‘dismissed as “wild female imagination”.’  Many men accused them of making up stories in order to mask the adultery which they were so obviously committing…  Later, though, it was confirmed that eight men from the closely related gene pool of the colony ‘had been using an animal anesthetic to knock their victims unconscious and rape them.’  In 2011, the men were convicted, but in 2013, it was reported that sexual abuse was still occurring within the community. 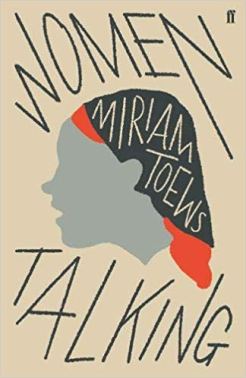 As in the real community, Toews’ women are illiterate, and have little to no concept of the world outside of their own community.  Eight women, who represent three generations from two families, the Loewens and the Friesens, ‘meet secretly in a hayloft to decide how to protect themselves and their daughters from future harm.’  This concept is a simple yet all-encompassing one.

The minutes of the meeting are recounted by our narrator, a teacher named August Epp, the only male character who features in a positive capacity in the novel.  August, whose parents were excommunicated when he was twelve years old, lived away from the colony for some years, attending school and University in England, and is therefore able to bestow knowledge upon the women.  The use of a male mouthpiece here was a simple plot device, but a remarkably interesting one.  August is both part of the group, working as he does as the women’s scribe, and separate from it, due to his gender.  He is a victim of the colony, but in a very different, and less violent and intrusive, way.

Focus is given to the case throughout; indeed, the novel is set over a two-day period which feels pivotal for the women.  The men were moved, at the insistence of the police, into the closest city for their own protection, and a crucial moment has been reached in the case.  August reflects: ‘And when the perpetrators return, the women of Molotschina will be given the opportunity to forgive these men, thus guaranteeing everyone’s place in heaven.  If the women don’t forgive the men… the women will have to leave the colony for the outside world, of which they know nothing.’

The way in which August relays the case demonstrates its horror.  He says: ‘In the year after I arrived, the women described dreams they’d been having, and then eventually, as the pieces fell into place, they came to understand that they were collectively dreaming one dream, and that it wasn’t a dream at all.’  The horrors do not stop there, however.  The very fact that all of the women were rendered unconscious when they were attacked caused the male elders to tell them there was no need for counselling.  A three-year-old girl, repeatedly violated, is denied professional medical treatment, as the elders are scared about anyone outside of the colony becoming aware of the attacks, and blowing the ‘whole incident… out of proportion.’

The rules of the colony are rigid and unfair for its womenfolk; typically, the men are allowed to do anything that they want to, and rarely come under scrutiny.  It is a typical patriarchy; women are expected to cook, clean, look after the children, and even act as midwives for one another.  They are forbidden to read, denied education, and told not to speak their own minds.  They speak only Plautdietsch, or Low German, a language which has not been favoured since the Middle Ages, and which is now only found in Mennonite communities.  The women have essentially been raised to be helpless outside the colony.  One of the older characters, Agnes, perfectly sums up their vulnerability when she says: ‘We’re unable to read, we’re unable to write, we’re unable to speak the language of our country, we have only domestic skills that may or may not be required of us elsewhere in the world, and speaking of the world – we have no world map -‘.

Women Talking is, as all of Toews’ books are, written with such clarity.  She really brings the culture to life.  The conversations which occur between the characters are thoughtful, provoking, angry, tense.  Toews’ women all have distinctive personalities, and are all strong and determined.  Salome, for instance, who is both daughter and mother in the book, is described thus: her ‘reputation in the family is that of a fighter, an instigator.  She doesn’t react calmly to authority and is often engaged in a battle of wills with other colony members over the slightest of things.’  August comments that he finds it curious that Salome has not been excommunicated.  An older woman, Greta, questions her faith, and declares, in a ‘radical statement’, that she is ‘no longer a Mennonite.’  Another victim, Nettie, ‘doesn’t talk, except to the children, but at night the members of the colony can hear her screaming in her sleep – or perhaps screaming in full consciousness.’

I found this every bit as much a piece of ‘profound, unsettling and virtuoisic work’ as the book’s blurb promises it to be.  Women Talking is a powerful and fitting novel to read in this, the age of the Me Too movement, and Toews has a great deal to say within its pages.  The story of these eight women, talking – although an imagined version of the real – is searing and vital.