It seems that I find Liz Jensen’s novels rather hit and miss for my personal taste. Whilst I adore The Ninth Life of Louis Drax, I recently abandoned The Paper Eaters, and did not much enjoy My Dirty Little Book of Stolen Time either. This historical novel takes place in fin-de-siecle Copenhagen, and follows a very articulate prostitute named Charlotte, and her rather crude companion, Fru Schleswig. The house which they begin to clean in order to make some money during the harsh winter of 1897 contains a locked room which holds a time machine; both women somehow fall, quite by accident, inside, and find themselves transported to present-day London, where they meet its inventor.

I am not the biggest fan of time-travel, and if I am to suspend my disbelief at all, it has to be done well. I did not feel as though it was approached with enough emphasis here; the process of travelling from one time period to another was glossed over somewhat, and the narrative simply seemed to propel Charlotte and Fru Schleswig into London with very little explanation. The speech which the inventor gave about his machine was quite dull and stodgy, and gave little clarity.

With regard to Charlotte, I did not connect with her at all as a character. She was incredibly precocious, which I found surprising for someone brought up as an orphan in the Victorian era, with no formal education to speak of. Her narrative voice, which carries the story, did not have enough fluidity to it, and the sentences were sometimes unnecessarily long and too complicated to suit the story. For instance, she might begin to speak about something articulate and quite interesting, and then start talking about sexual experiences in the same sentence, with crude language. Charlotte did not meld together that well in my opinion; there were too many conflicting character traits for her to appear as a believable being. Another flaw of the novel in my opinion is that <i>all</i> of the characters are extremely flawed; they are stuffed to the brim with eccentricities and peculiarities, and as a cast, there is too much which alienates them from the reader.

I feel rather conflicted over My Dirty Little Book of Stolen Time. Its storyline did intrigue me, and it certainly pulled me in when I began to read, but I felt as though it was trying to do too many things at once. Whilst the core idea was an interesting one, Jensen surprised me by not seeming to handle it as effectively as she does with her core plotlines and twists in her other work. My Dirty Little Book of Stolen Time was a little too muddled for my particular taste, and it does become rather too silly as it moves along.

Anybody who knows me will not be surprised in the slightest to hear that Ali Smith’s Winter, the second novel in her seasonal quartet, was one of my most highly anticipated reads of 2017. I received a signed copy for Christmas, and read it just three days afterwards. The novel is, again unsurprisingly, startlingly brilliant; I was swept in immediately, and was once again blown away by the quality and clarity of Smith’s writing. Winter is searing, and so clever; it is once incredibly topical, informed, and important. I cannot speak highly enough of the novel in my review; I shall merely end by saying that it is an absolutely brilliant literary offering from Smith, as per. 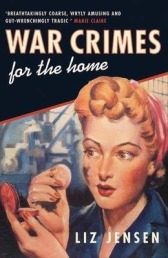 War Crimes for the Home by Liz Jensen ****
I have very much enjoyed most of Liz Jensen’s novels to date, and the storyline of War Crimes for the Home would have piqued my interest even if I had not already been acquainted with her work. This is, I believe, my first foray into her historical fiction, and I found it very enjoyable. This takes place on the Home Front in Britain during the Second World War, and the battles fought on British soil, along with the effects which they brought, have been well captured. I liked the use of retrospect, and the memory loss which present-day Gloria suffers with has been handled well. Not at all a nostalgic portrayal of times gone by, War Crimes for the Home is sure to appeal to every fan of historical fiction that likes to be surprised a little in their reading.

Turtles All the Way Down by John Green ****

As with many readers, John Green’s Turtles All the Way Down was a highly anticipated read for me. I really enjoy his writing, particularly with regard to the dialogue which he sculpts; it is not always entirely authentic, in that I cannot imagine many teenagers speaking as articulately as he clearly can, but it is stuffed with original ideas, and beautiful turns of phrase. Green’s portrayal of anxiety is not a stereotypical one, such as I have read before; rather, it has depth. The plot is not a predictable, and it certainly throws up some surprises along the way. Whilst not my favourite of his novels, I still found it markedly difficult to put Turtles All the Way Down well… all the way down.