As readers of my reviews will already know, books which focus on a very particular part of history – a short and defined time period, a distinct group of people, or a specific geographic location – are ones which I continue to seek out.  Anne Sebba’s Les Parisiennes: How the Women of Paris Lived, Loved and Died in the 1940s contains all three elements, and I therefore eagerly picked it up. 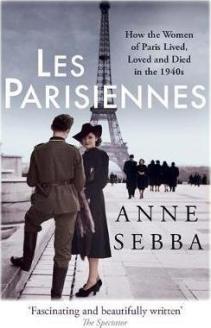 In June 1940, German troops occupied Paris, changing the lives of all of the capital city’s citizens in many ways, dramatically or otherwise.  Rather than look at a specific group of women  – either those who collaborated with the Nazis, or those who chose too defy them – Sebba examines the ‘moral grey area which all Parisiennes had to navigate in order to survive.’

In order to learn about her subjects, and what they went through during the Occupation, as well as afterwards, Sebba conducted ‘scores’ of interviews and read many firsthand accounts.  She successfully draws together testimonies of native Parisiennes and those visiting the city, for whatever reason, on a temporary basis: ‘American women and Nazi wives; spies, mothers, mistresses, artists, fashion designers and aristocrats.’

The Times Literary Supplement hails her achievement ‘richly intelligent…  Voices, belonging to women of all classes, ages and educational backgrounds, weep and sing through this extraordinary book.’  Author Edmund White notes that Sebba ‘understands everything about the chic, loathsome collaborators and the Holocaust victims, and their stories are told in an irresistible narrative flood.’  Sarah Helm (whose wonderful book If This is a Woman I reviewed here) praises Sebba for not offering ‘an explanation as to why some women chose one course, others another, rightly letting their actions and compelling life stories speak for themselves.’

In her prologue, Sebba recognises: ‘Echoes of the past continually resonate in modern-day France, because what happened here during the 1940s has left scars of such depth that many have not yet healed.  There is still a fear among some that touching the scars may reopen them.’  She writes that her aim is to ‘examine in these pages what factors weighed most heavily on women, causing them to respond in a particular way to the harsh and difficult circumstances in which they found themselves.’  Sebba goes on to say: ‘I want the pages that follow to avoid black and white, good and evil, but instead to reveal constant moral ambiguity, like a kaleidoscope that can be turned in any number of ways to produce a different image.’

Les Parisiennes is incredibly detailed, and impeccably researched.  A great deal of social history has been included, along with tiny details which have perhaps been overlooked by other researchers.  Along with the many women Sebba has chosen to include, she also writes about such things as the very exclusive air raid shelter set up at the Ritz in Paris, which was ‘soon famous for its fur rugs and Hermès sleeping bags.’  Sebba transports her readers to the city, which, despite the dire lack of fresh food, and the scary presence of soldiers, is still largely recognisable in the twenty-first century.

Sebba has included a very helpful ‘cast’ list of all of the women whom she writes about in Les Parisiennes.  These women are variously actresses, the wives of diplomats, students, secret agents, writers, models, and those in the resistance movement, amongst others.  She has assembled a huge range of voices, which enable her to build up a full and varied picture of what life in Occupied Paris was like.  Rather than simply end her account when the German troops leave, Sebba has chosen to write about two further periods: ‘Liberation (1944-1946)’, and ‘Reconstruction (1947-1949)’.  Les Parisiennes is, in consequence of a great deal of research, a very personal collective history.

Les Parisiennes has been incredibly well considered from start to finish.  The impartiality which Sebba gives each account works very well, and allows her to write about so many courageous, inspiring, and formidable women, all of whom did something to shape the city in the war years, and beyond.  The original evidence has been well pieced together, and the chronological structure, which seems perhaps obvious in such a book, serves it well.  Les Parisiennes is thorough and exact, whilst still remaining highly readable.  It is a triumph.