I picked up Canadian author Jessica J. Lee’s debut work, Turning: Lessons from Swimming Berlin’s Lakes during a lovely warm summer’s day, and it turned out to be the perfect choice.  Since very much enjoying Amy Liptrot’s The Outrun, which is partially a memoir of outdoor swimming, I have been keen to pick up more memoirs along the same theme.  The Times Literary Supplement calls Turning ‘a brilliant debut’, and the New Statesman notes that it is ‘filled with a wonderful melancholy as she swims through lakes laden with dark histories.’ 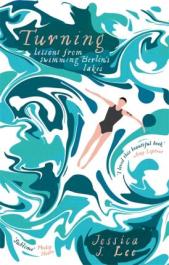 Although I chose to read this during the summer, it is seasonally appropriate all year round, as Lee swims ‘through all four seasons.  For her, it is the thrill of a still, turquoise lake, of cracking the ice before submerging, of cool, fresh, spring swimming, of floating under blue skies – of facing past fears of near drowning and of breaking free.’ Turning has been split into four sections which correspond to the seasons, and these are formed by separate chapters, which have lovely emotive titles like ‘under ice’, ‘out of air’, and ‘borderland’.

In this manner, Lee charts an entire year, and over fifty lakes, which she swims in around the city of Berlin.  She moved there as part of her doctoral research, and found such worth in outdoor swimming.  Each of Lee’s chosen lakes has been listed at the beginning of the book, along with a series of illustrated maps which show where they can be found.  Her quest, she explains, has been well planned out; an Excel spreadsheet chronicles a catalogue of lakes, along with instructions of how to get to them, and the best time of year to go.

Lee decided to take up outdoor swimming to try and help with her mental health.  Living in a city on a different continent from most of her friends and all of her family began to take its toll on her, and she reflects: ‘… as I was retreating from the deep end of depression, I surfaced with the bizarre notion that the solution to my problems lay in swimming…  [In Berlin] Hundreds of spots of blue multiplied exponentially as the city lines crept into the surrounding land.  These lakes and rivers – their intricate weave of water laid on to the flat North German Plain by retreating glaciers in the last ice-age – had worked a tiny hook into my heart, and I could do nothing for it but swim.’  She goes on to explain her hopes for her new pursuit: ‘Swimming would be a way of staying with my fears, a way of staying in place.  Above all, I sought to find some balance in it.’

Alongside Lee’s personal experience of swimming is research about ‘how the lake came to be in the landscape, or how its seasonal changes take place’, as well as memories from her past.  At first, these memories all revolve around the water, but she begins to open up about relationships as Turning moves further on.  She discusses the displacement and loneliness which she feels, having moved around a lot, and being far away from her family.  She is continually aware that her time in Berlin is temporary, but this does gently encourage her to make decisions about her future which she feels are for the best.  Swimming gives her a place, a purpose: ‘In the middle of the lake, I’m completely present.  I’m no longer afraid to be alone.  I’ve conditioned myself to the lake, to the cold, to the pain of it.  I can hold it.  I’ve made it mine.’

The prose used at the beginning of the prologue, in which Lee is describing the feeling of being in the water, is sensuous: ‘It slips over me like cool silk.  The intimacy of touch uninhibited, rising around my legs, over my waist, my breasts, up to my collarbone.  When I throw back my head and relax, the lake runs in my ears.  The sound of it is a muffled roar, the vibration of the body amplified by water, every sound felt as if in slow motion.’  In this manner, Lee’s narrative throughout the memoir has such glorious description within it.  She employs this particularly when discovering a new lake, or providing comparisons of swimming in distinct seasons.  She writes: ‘You come ton know the consistent feel of spring and the stagnant warmth at the top of a summer lake.  When the water clears in the autumn, you feel it: the lake feels cleaner on your arms, less like velvet and more like cut glass.  And then winter comes, sharper than ever.  Swimming year-round means greeting the lake’s changes.’  Her descriptions have such a vivacity to them: ‘… I dive off the dock’s edge into the amulet blue, feeling so wholly present in the water that I forget I’m alone, and climb out and ump off again and again until I’m exhausted.’

Alongside her musings on swimming in Berlin, Lee reflects on other lakes which she has swum in.  Of the Ladies’ Pond at Hampstead Heath, for instance, she writes: ‘I began to swim there alone, surrounded by women who seemed stronger than me.  I wanted to be like them: sturdy, no-nonsense, unsentimental.  The pond was opaque and slipped around my body thickly, the water a felted brown.  It was cold and open: a bright circle of relief in the middle of the trees.  I swam out into its centre again and again, out towards the willow and then back towards the dock.  I swam to the lane rope at its farthest edge, watching the cormorants glide through the deep.  The movement was an anaesthetic.’

Part-memoir, part-musing on nature, I cannot recommend Turning enough.  Lee sees each new lake as a gift, which I found wonderful; she never takes her swimming for granted, and even when it does not quite go to plan, there is always a positive that she can find in getting into the water.  Turning is a peaceful and thoughtful read, filled with such beautiful prose.

I found Turning both fascinating and inspirational, and would recommend it to anyone who already loves the outdoors, or wishes to become more outdoorsy.  It has fostered in me the desire to try outdoor swimming for myself; I’m not sure I’d be brave enough to do so in Britain, but I’m hoping to work it into one of my future trips.