The forty-fifth publication on the Penguin Moderns list is one which I was particularly looking forward to – The Haunted Boy by Carson McCullers.  Whilst a huge fan of her fiction, and of the Southern Gothic genre in which she wrote, I have only read a handful of her short stories to date.  The blurb states that ‘these moving stories portray love, sorrow and our search for happiness and understanding.’  All of the tales here – ‘The Haunted Boy’, ‘The Sojourner’, and ‘A Domestic Dilemma’ – were published between 1950 and 1955.

As with her longer works, McCullers’ writing is fantastic – multilayered, perceptive, and admirable.  She captures moods particularly so well in the first story, ‘The Haunted Boy’: ‘It was then, in the unanswering silence as they stood in the empty, wax-floored hall, that Hugh felt there was something wrong’.  McCullers also marvellously explores her characters and their psyches.  From the same story, she writes of young protagonist Hugh: ‘Confession, the first deep-rooted words, opened the festered secrecy of the boy’s heart, and he continued more rapidly, urgent and finding unforeseen relief.’

McCullers also fantastically captures the essence of memory; from ‘The Sojourner’, for instance: ‘The twilight border between sleep and waking was a Roman one this morning, splashing fountains and arched, narrow streets, the golden lavish city of blossoms and age-soft stone.  Sometimes in this semi-consciousness he sojourned again in Paris, or war German rubble, or Swiss ski-ing and a snow hotel.  Sometimes, also, in a fallow Georgia field at hunting dawn.  Rome it was this morning in the fearless region of dreams.’

McCullers writes of some very dark topics in this selection of her work, and contrasts this darkness with a series of glorious descriptions.  Her character portraits are always sharp and varied.  All three stories here are rich, thoughtful, and searching, and I enjoyed every single word of them.  I am very excited to read the rest of McCullers’ short work at some point very soon.

The Garden of Forking Paths by Jorge Luis Borges ** (#46)
I do not think I had ever read any of Argentinian author Borges’ work before picking up the forty-sixth Penguin Modern, The Garden of Forking Paths.  I was not entirely sure, from other reviews which I have seen of various pieces of Borges’ work, whether this would be for me.  Collected here are several ‘fantastical tales of mazes, puzzles, lost labyrinths and bookish mysteries, from the unique imagination of a literary magician’, and all were first published during the 1940s.  They have been variously translated by Donald A. Yates, Andrew Hurley, and James E. Irby.

The stories in this collection are the title story, alongside ‘The Book of Sand’, ‘The Circular Ruins’, ‘On Exactitude in Science’, and ‘Death and the Compass’.  All are very short, and ‘On Exactitude in Science’ covers just a single page.  There are some interesting ideas at play throughout, and I found the collection strange and unusual.  I could never quite guess where the stories were going to end up.

Whilst I found The Garden of Forking Paths interesting enough to read, and enjoyed some of the quite beguiling descriptions in its pages, it has not sparked an interest within me to pick up any more of Borges’ work.  I can see why other readers would really enjoy this collection, but it was not really my style.  The tales were a little obscure for my particular taste at times, and I found that they sometimes ended a little abruptly. 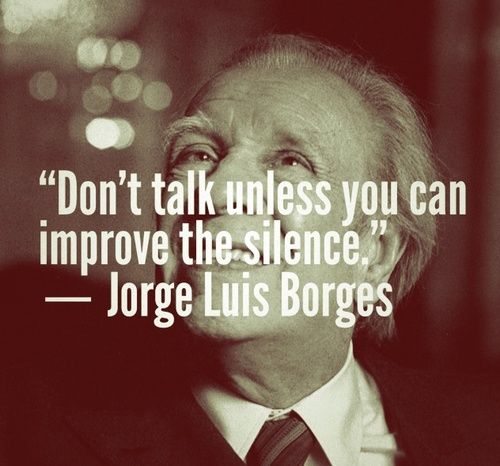 My dear friend Caroline suggested that Borges’ poems would be a marvellous thing to post on the blog.  She calls them ‘fairly unusual treats’, and I wholeheartedly agree.  Below is one of my favourites of his poems, ‘New England 1967’.

The forms in my dreams have changed;

now there are red houses side by side

and the delicate bronze of the leaves

and chaste winter and pious wood.

As on the seventh day, the world

is good. In the twilight there persists

an ancient murmur of Bibles, war.

Soon (they say) the first snow will fall

America waits for me on every street,

but I feel in the decline of evening

today so long, and yesterday so brief.

your streets, without time or reason.