Having very much enjoyed Jane Robinson’s Bluestockings some years ago, I felt that it was high time I picked up another of her books.  I found the prolific author’s tenth book – Hearts and Minds: The Untold Story of the Great Pilgrimage and How Women Won the Vote – on a jaunt to my local library, and settled down to read it on a grey afternoon.

The idea behind Hearts and Minds fascinated me.  I have always been so interested in the suffrage movement, but Robinson had found an element of it which I had never before learnt about.  This surprises me, as I have studied it in detail over the years; the Great Pilgrimage just seems to be a largely overlooked event, for reasons unbeknownst to me.  I agree wholeheartedly with Robinson’s commentary on the Great Pilgrimage; she calls it ‘one of the most inspiring and neglected episodes in British history.’

In the summer of 1913, the year before the outbreak of the First World War, Britain became ‘gripped by suffragette fever’.  This was the year in which the Great Pilgrimage took place.  It was planned by the peaceful non-militant suffragist group, the National Union of Women’s Suffrage (NUWSS), who were keen to create as much distance as possible between themselves and the militant suffragettes.  The often increasingly violent acts of the suffragettes made them seem a larger group than they were; rather, the suffragettes were a minority, albeit one who gained a lot of attention in the media, and in the country at large.  As Robinson writes, the suffragettes’ ‘confrontational approach distracted public attention from the imaginative and quietly courageous work done by tens of thousands of others across Britain…  [The suffragists] were just as determined about emancipation… but more persuasive.’  The suffragists wished to set themselves apart once and for all, and planned the Great Pilgrimage to be ‘as much as a march against militancy as it was for women’s rights.’

Thousands of women took to the streets to try to win equal suffrage. These women, from all over the country, ’embarked on an astonishing six-week protest march they called the Great Pilgrimage.  Rich and poor, young and old, they defy convention’, and happily gave up ‘jobs, family relationships, and even their lives to persuade the country to listen to them.’  Their journey was at once ‘dangerous, exhausting and exhilarating’, and paved the way to alter the lives of British women forever.  Their march was beset by problems from the outset, from vandalism of their property, to physical violence meted out by those who disagreed that women should be given equal suffrage.

The women who participated in the Great Pilgrimage were largely unknown.  High-profile suffragists marched amongst them, but for the most part the women left their small towns and villages all over the country to show their solidarity.  Of these women, Robinson notes: ‘Many of the people who feature in this book were not thought important enough to record in official chronicles of the fight for the vote, or were too modest to imagine anyone being interested in who they were.’  Robinson also writes, although not always at great length, about the hundreds of men who supported the cause, many of whom set out to march with the women along part of the route.

The march took six different routes from all corners of Britain – Carlisle, Newcastle, Yarmouth, Portsmouth, and Brighton, amongst other locations – converging in a final push upon London.  Smaller routes fed into these larger ones ‘like tributaries, all flowing to the capital city.’  It began in the middle of June, and went on until the end of July.  The different groups of participants had to stop many times along the way in order to hold meetings with locals, trying to convert the more stubborn to their cause.

In Hearts and Minds, Robinson weaves together extracts from diaries, letters, and unpublished accounts, framing these within the wider context of the suffrage movement, and the United Kingdom’s political landscape.  She spans a vast period, from the publication of Mary Wollstonecraft’s A Vindication of the Rights of Woman in 1792, and thoroughly explores ‘a story of ordinary people’ who brought about ‘extraordinary change’.  In her introduction, Robinson sets out the social constraints of early twentieth-century Britain in a succinct manner, and continually points out the importance of the Great Pilgrimage.  It at last gave women, who were denied a voice, ‘the authority to challenge the domestic stereotype’.  Although women did not receive equal suffrage until 1928, the Great Pilgrimage was a series of small steps, which made an enormous difference.

Hearts and Minds is incredibly thorough, and so easy to read.  Robinson sets out the birth of both suffrage groups in great detail, and also offers biographical information about several of the women who were there from the very beginning.  The attention which Robinson gives to setting the scene, indeed, is so thorough, that the Great Pilgrimage is not explored in any detail until the middle of the book.

Hearts and Minds is inspiring, filled as it is with so many selfless women – and men – who advanced a cause of vital importance, and changed Britain for the better.  They ensured, en masse, that their voices were heard, and their determination is heartening.  This is another highly engaging book from a wonderful historian, and I am very much looking forward to exploring the rest of her oeuvre in the months to come. 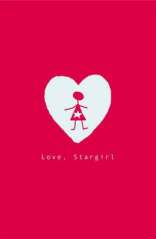 Stargirl by Jerry Spinelli ****
Stargirl was one of the very first books which I wrote in my original ‘to-read’ notebook when I purchased it back in 2007, and I have only just got around to purchasing and reading it.  I was so excited to begin it after April telling me that the snippets of the story which she had read were beautiful.  Whilst reading, the novel reminded me of Looking for Alaska by John Green in terms of its school-based storyline and quirky characters, and The Virgin Suicides by Jeffrey Eugenides with regard to its narrative style.  (Side note: If you have enjoyed either or both of these novels, then go and locate yourself a copy of Stargirl as soon as you can, and don’t stop reading until you have finished it.)

The characters in Stargirl are all incredibly well developed, and I loved how different they were.  Spinelli makes it easy to identify those who are only mentioned once or twice in the narrative due to the original details which he includes.  The characterisation of Stargirl particularly was marvellous.  I loved how quirky and unexpected she was, and the arc of her character development was well constructed and believable, if very sad.  This is a novel which I will certainly be reading again.

Bluestockings: The Remarkable Story of the First Women to Fight for an Education by Jane Robinson ****
I find non-fiction books like this fascinating, particularly when they explore education and the suffrage movement in detail (which, incidentally, Bluestockings does).  I loved the way in which Robinson set out the history of the female fight for education, and admired the fact that she based the book only within England and Scotland.  Her use of sources – quotes and case studies – to back up particular facts or statements worked very well, and I was pleased that she did not rely too heavily upon them, as some historical books which I have read in the past have done.  Without the women outlined in Bluestockings, I doubt that I would be as well educated as I am now.  It is thanks to them, really, that all children and young people have the same educational rights and opportunities to study today, regardless of their sex or upbringing.  I am so very grateful for both their determination and their bravery.  A great and highly recommended book.

Into the Wild by Jon Krakauer ***
I had not planned to read another non-fiction book directly after finishing the marvellous Bluestockings, but it was the first suggestion which I picked out of my handy to-read jar, so I decided to go with it regardless.  The story which Krakauer looks at – that of a young man named Chris McCandless, who donated his savings to Oxfam and then disappeared into the Alaskan wilderness, his whereabouts relatively unknown until his body was found some time afterwards – is interesting, and as I don’t really read true crime books often, it has made me want to explore the genre further.  Despite this, Into the Wild did feel a little lacking in its execution.  Krakauer’s narrative style was a touch dull at times, and I think a little more passion in or enthusiasm for his subject would have made the world of difference.  Although I was keen to learn about McCandless’ story, the writing style meant that I rather struggled to get into it.