I begin this post with a question: what is the first adult novel which you remember reading?  As a child, I always had my nose within the pages of Enid Blyton and C.S. Lewis, and had a slight error at the age of seven, when I decided that Moby-Dick looked as though it would keep me busy for a while, and began it only to put it down soon afterwards.

At the age of eight, however, I vividly remember reading both Jane Eyre and To Kill a Mockingbird – the first my own choice, and the second a gift from my father – and immediately feeling as though I had unlocked a whole new world of wonders.  I swiftly followed these wonderful novels, enduring favourites of mine, with the likes of Wuthering Heights and A Christmas Carol, and haven’t looked back since.

Are the first adult novels which you read classed amongst your current favourites?  If you remember, what made you select the adult books which you did as a child or teenager?

The first book of The Gregory Peck-a-long, a fabulous week-long readathon project which I am undertaking with the lovely Belinda, is Jean Rhys’ Wide Sargasso Sea.  This postcolonial novel, which was first published in 1966 and is a prequel to my beloved Jane Eyre by Charlotte Bronte, was a re-read for me.  The book’s blurb says the following: ‘Set against the lush backdrop of 1830s Jamaica, Jean Rhys’ powerful, haunting story was inspired by her fascination with the first Mrs Rochester, the mad wife’.  Author Esther Freud deems the work ‘powerful and haunting…  thick with bright colour and deep, dark thoughts.  Mesmeric and unforgettable’. 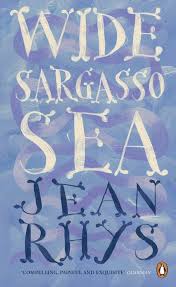 I purchased a gorgeous Penguin edition of the novel (not the one pictured) from a lovely secondhand bookshop whilst at University.  The story’s premise intrigued me straight away: ‘If Antoinette Cosway, a spirited Creole heiress, could have foreseen the terrible future that awaited her, she would not have married the young Englishman.  Initially drawn to her beauty and sensuality, he becomes increasingly frustrated by his inability to reach into her soul.  He forces Antoinette to conform to his rigid Victorian ideals, unaware that in taking away her identity he is destroying a part of himself as well as pushing her towards madness’.

Antoinette’s narrative voice is candid, and one immediately has a sense of trusting her: ‘My father, visitors, horses, feeling safe in bed – all belonged to the past’.  Her story is a sad one; her mother ‘persuaded a Spanish Town doctor to visit my younger brother Pierre who staggered when he walked and couldn’t speak distinctly.  I don’t know what the doctor told her or what she said to him but he never came again and after that she changed.  Suddenly, not gradually.  She grew thin and silent, and at last she refused to leave the house at all’.

The ‘Us’ and ‘Them’ culture is evident here from the very beginning: ‘They say when trouble comes close ranks, and so the white people did’.  The racial hatred which is directed at Antoinette is heartbreaking: ‘I never looked at any strange Negro.  They hated us.  They called us white cockroaches.  Let sleeping dogs lie.  One day a little girl followed me singing, “Go away, white cockroach, go away, go away.”  I walked fast, but she walked faster.  “White cockroach, go away, go away.  Nobody want you.  Go away.”‘  One of her friends, Tia, then goes on to tell her, ‘Old time white people nothing but white nigger now, and black nigger better than white nigger’.  Rhys exemplifies how incredibly difficult – and often, nigh on impossible – it can be for one to fit in: ‘It was a song about a white cockroach.  That’s men.  That’s what they call all of us who were here before their own people in Africa sold them to the slave traders.  And I’ve heard English women call us white niggers.  So between you I often wonder who I am and where is my country and where do I belong and why was I ever born at all’.

Much of the first part of the novel deals with Antoinette’s painfully trying to come to terms with herself, her awkward societal position, and the fact that she is growing up: ‘I woke next morning knowing that nothing would be the same.  It would change and go on changing’.  The family’s poverty is talked about within the community in a no-holds-barred manner when her mother remarries: ‘Her new husband will have to spend a pretty penny before the house is fit to live in – leaks like a sieve…  As for those two children – the boy an idiot kept out of sight and mind and the girl going the same way in my opinion’.  With the arrival of her new stepfather, the Cosways are suddenly pulled into wealth, something which just serves to make everything worse: ‘The black people did not hate us quite so much when we were poor.  We were white but we had not escaped and soon we would be dead for we had no money left.  What was there to hate?’

The brutality of Antoinette’s surroundings has been well evoked: ‘I took another road, past the old sugar works and the water wheel that had not turned for years.  I went to the ports of Coulibri that I had not seen, where there was no road, no path, no track.  And if the razor grass cut my legs and arms I would think “It’s better than people”.  Black ants or red ants, tall nests swarming with white ants, rain that soaked me to the skin – once I saw a snake.  All better than people’.  Colour, as Freud says, plays a big part in the descriptions of Jamaica, and the way in which Antoinette perceives them: ‘I knew the time of day when though it is hot and blue and there are no clouds, the sky can have a very black look’.  Colour is used to show the obvious racial differences within Spanish Town, to the ‘light and dark’ of Heaven and Hell, and the evils of the natural world: ‘Everything was brightness, or dark’.  In consequence, the whole feels rather oppressive; it is as though something sinister is always lurking on the horizon.  Rhys heightens her scenes accordingly, and builds to a stifling, airless whole.

Rhys is incredibly skilled at capturing scenes and actions, and rendering them onto paper.  Antoinette’s voice has been perfectly crafted, and serves to pull one straight into Wide Sargasso Sea.  The story which Rhys has imagined as belonging to the ‘mad wife’ of Jane Eyre is thoughtful and has a lot of depth to it.  The use which she makes of Mr Rochester’s first person perspective in the second part of the novel works wonderfully, and helps to construct a rich, compelling novel, which is difficult to put down.  The different dialects and patois which Rhys has made use of have been well captured, and the heavily-entrenched superstitions of the region are well considered and are woven in accordingly.  One of the real strengths of the novel is the way in which she exemplifies how drastically one person can alter others.  Perhaps to my shame, I have never read any of Rhys’ other work, despite so enjoying Wide Sargasso Sea.  I shall certainly be remedying this as soon as I possibly can.

1. Jane Eyre by Charlotte Bronte
No classics list for me would be complete without Jane Eyre.  The story is a timeless one, and it resonates with

readers today as much as it ever has done.  Bronte’s writing is beautiful, and the characters and settings she crafts are marvellously lifelike.  Jane Eyre is at the peak of the classics list for me, and I’m sure I shall read it many more times in future.  It stands to reason that many film versions have been released of the book, and I feel that Bronte is as popular as she deserves to be.

2. Middlemarch by George Eliot
I studied English and History at University, and as George Eliot was a relatively local resident to the city, my Humanities building was named after her.  Middlemarch was the first of her novels which I read, and I was blown away by it.  The sense of place and time which she builds up is truly stunning, and I felt as though I was right beside the characters as they lived their lives.  As a social and political study of the 1800s, you cannot get much better than Middlemarch.

3. Tess of the d’Urbervilles by Thomas Hardy
I adore Hardy’s writing style, and his descriptive passages are rarely equalled in literature.  Tess of the d’Urbervilles is not a happy book by any means, but it exemplifies the hideous poverty which many had to live through.  Tess is a lovely character on the whole, and she is also incredibly memorable.  This novel proves a marvellous introduction to Hardy’s writing.

4. The Importance of Being Earnest by Oscar Wilde
I find Wilde fascinating, both as an author and a singular figure.  He was such an exuberant and witty character, and this shines through in everything he writes.  Many are familiar with The Importance of Being Earnest from various film versions and theatre performances, but I feel that the best way to appreciate the play is in its original form.  Wilde’s writing sparkles, and his characters are simply superb.

5. Alice’s Adventures in Wonderland by Lewis Carroll
As far as I am concerned, Alice’s Adventures in Wonderland is a timeless book, much like the aforementioned Jane Eyre.  I have read it countless times, yet still find it utterly magical.  Carroll’s imagination is stunning, and the many film versions of the book – yes, I have seen lots of them – have made such wonderful use of the original material.