I begin with a book by one of my favourite, and sadly very underrated, authors today, and use Goodreads as my guide to come up with seven more tomes which ‘Readers Also Enjoyed’.

1. So Long, See You Tomorrow by William Maxwell 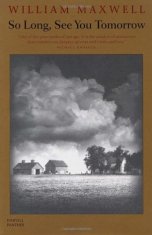 ‘On an Illinois farm in the 1920s, a man is murdered, and in the same moment the tenous friendship between two lonely boys comes to an end. In telling their interconnected stories, American Book Award winner William Maxwell delivers a masterfully restrained and magically evocative meditation on the past.‘

2. Blood Tie by Mary Lee Settle
‘n a novel that begins with accidental death and ends with deliberate murder, Mary Lee Settle tells the story of an eclectic collection of American and European expatriates who take refuge in an ancient Turkish city and, once there, wreak havoc on the Aegean paradise. At first the characters appear to have little in common, but as the novel progresses their motives and desires cross and blend in a geometry of misunderstanding.‘

‘This is the story of a family of the ‘best’ people, living in Gibbsville, Pa. Three generations of the Chapin family are portrayed with intimacy and uncompromising clarity. Many other people at all levels of the social ladder are portrayed as well, and what they do and say to one another is often shocking.‘

4. A Crown of Feathers by Isaac Bashevis Singer
‘These richly hypnotic tales enfold the reader into Isaac Bashevis Singer’s special world of imps, demons, lovers, and other mischievous creatures. His world is a world of feelings, driven by lust, lechery, greed, madness, and love. All of his creatures are seen with a clear but loving eye; all seem and are in fact possessed by good and evil, caught in fascinating dilemmas, now terrible, now wryly comic.‘

5. The News from Paraguay by Lily Tuck

‘The year is 1854. In Paris, Francisco Solano — the future dictator of Paraguay — begins his courtship of the young, beautiful Irish courtesan Ella Lynch with a poncho, a Paraguayan band, and a horse named Mathilde. Ella follows Franco to Asunción and reigns there as his mistress. Isolated and estranged in this new world, she embraces her lover’s ill-fated imperial dream — one fueled by a heedless arrogance that will devastate all of Paraguay.
With the urgency of the narrative, rich and intimate detail, and a wealth of skillfully layered characters, The News from Paraguay recalls the epic novels of Gabriel García Márquez and Mario Vargas Llosa.‘

6. The Magic Barrel by Bernard Malamud
‘Bernard Malamud’s first book of short stories, The Magic Barrel, has been recognized as a classic from the time it was published in 1959. The stories are set in New York and in Italy (where Malamud’s alter ego, the struggling New York Jewish painter, Arthur Fidelman, roams amid the ruins of old Europe in search of his artistic patrimony); they tell of egg candlers and shoemakers, matchmakers, and rabbis, in a voice that blends vigorous urban realism, Yiddish idiom, and a dash of artistic magic.  The Magic Barrel is a book about New York and about the immigrant experience, and it is high point in the modern American short story. Few books of any kind have managed to depict struggle and frustration and heartbreak with such delight, or such artistry.‘

7. I, etcetera by Susan Sontag
‘In eight stories, this singular collection of short fiction written over the course of ten years explores the terrain of modern urban life. In reflective, telegraphic prose, Susan Sontag confronts the reader with exposed workings of an impassioned intellect in narratives seamed with many of the themes of her essays—the nature of knowing, our relationship with the past, and the future in an alienated present.‘

8. Gogol’s Wife and Other Stories by Tommaso Landolfi
‘Much admired in Europe, Landolfi has been called “the Italian Kafka”; he is often linked with the Surrealists, and in the intellectual quality of his fantasy there are certain affinities with Borges; but beyond these superficial comparisons, his is a truly unique—and fascinating—art. It is based in a prodigious imagination, a very curious sense of humor and a rare command of irony.‘

Have you read any of these?  Which pique your interest?