I was lucky enough to travel to beautiful Amsterdam in February, and whilst Otto de Kat’s The Longest Night is set largely in its sister city, Rotterdam, I felt that it would be a good choice to read before I set off.  Published in the Netherlands in 2015, it has been translated into English by Laura Watkinson.  I had heard of de Kat before selecting this tome, but hadn’t read any of his work before.

The Longest Night begins in an intriguing manner, which makes one want to read on: ‘Emma knew exactly what day it was, and what time, and what was going to happen.  Her questions were a smoke screen, she wanted the nurse to think she was already quite far gone’.  Our protagonist is Emma Verweij, is now ninety-six, and is suffering from memory problems.  Whilst she is unable to remember anything which has happened to her recently, her past memories are vivid to her, and thus, a structure unfolds in which we travel back with her – first to Berlin, and then to the Netherlands – through a series of fragmented chapters.  Interestingly, whilst she feels alive only when searching the recesses of her mind for past memories, Emma is aware that she is reaching the end of her mortality.  In this sense, the retrospective positioning of the omniscient narrator works well; we really get an idea of how muddled her mind is as the novel goes on: ‘Her life had shattered into fragments, crystal clear, light and dark, an endless flow.  Time turned upside down, and inside out.’

Essentially, then, we can see The Longest Night as a reflection of Emma’s life, and how she lived it.  De Kat has handled the sense of historical significance very well indeed; the past comes to life through a series of descriptions of place and weather.  During the Second World War, Emma’s husband, Carl, who works for the Ministry of Foreign Affairs, is arrested, and she has no option but to flee to safety.  She ends up in the Netherlands.  This is de Kat’s starting point; Emma then goes forward in regard to her memories, and those whom she conjures up from the annals of her past existence are vivid.  There is, however, little chronological pattern between the memories.  This technique serves to make Emma’s story more believable; we as readers are encountering the past as she remembers it.

Watkinson’s translation has been deftly worked; the prose is fluid and as vivid as I imagine the original is.  De Kat’s approach is relatively simple, but it has been well executed.  Despite all of the positives, what really let the book down as far as I am concerned is the dialogue.  Only the minority of conversational patterns appeared as though they could realistically be uttered; for the most part, sentences were awkward and almost robotic.  I’m loath to believe that this is a translation issue.  Regardless, it did put me off rather, and I found myself enjoying the story less as it went on.  In terms of the plot too, there are definite lulls as one reaches the Netherlands alongside Emma.

There are some profound, and almost quite moving, musings upon life and death within The Longest Night, but the loss of momentum really made the whole suffer.  When I began, I was fully expecting to give the book a four-star rating.  As I neared the quarter point, however, my mind changed; I became far less interested in both story and characters, and I found myself even disliking some of the chapters.  There was an odd and rather jarring repetition to it at times too.  I have opted for a three star review, as the beginning was so engaging; there sadly just wasn’t much of the consistency which I was expecting of it, and I will thus be less keen to pick up another of de Kat’s novels in future.

In which my boyfriend and I travelled to Amsterdam and Rotterdam, and had a whale of a time.

Music:
‘Let’s Get Out of This Country’ by Camera Obscura | ‘Holiday’ by The New Amsterdams | ‘Holland, 1945′ by Neutral Milk Hotel’

Celebrated author Jan van Mersbergen’s Tomorrow Pamplona was the fifth book upon the wonderful Peirene Press list of novellas in translation.  In this instance, the tale was originally written in Dutch, and has been translated into English by Laura Watkinson.  De Morgen calls this ‘an intense reading experience…  Van Mersbergen tells what needs to be told and not a word more’. 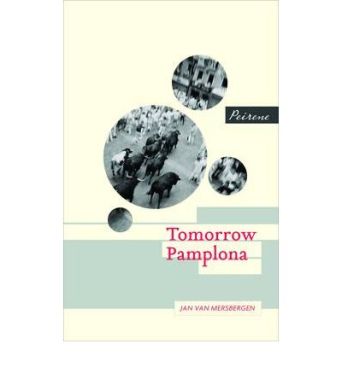 From the first, I did like the idea of the chance encounter which the whole plot revolves around; a professional boxer and the father of a young child ‘meet by chance on a journey to the Pamplona Bull Run.  The boxer is fleeing an unhappy love.  The father hopes to escape his dull routine.  Both know that, actually, they will have to return to the place each calls “home”‘.  Tomorrow Pamplona has a storyline which I would not automatically be drawn to.  However, I have very much enjoyed the majority of Peirene’s publications, and have high hopes for everything which they painstakingly translate and reprint.

At the outset, Tomorrow Pamplona appears to be very well paced, and the translation, particularly with regard to the sections which feature the boxer, Danny Clare, has such a rhythm to it.  The balance between action and imagery has been well realised: ‘He crosses a busy main road and runs into a park.  He comes to a patch of grass with a bronze statue in the centre, a woman holding a child in the air as though she wants to entrust it to the clouds’.  With regard to the characters, however, the prose does tend to veer toward the relatively simplistic.  The lack of complexity in sentence structure takes something away from the story as far as I am concerned; it felt like rather a plodding reading experience after the first few pages, and it’s not a process which I can say I very much enjoyed.

There was no immediate captivation here for me.  Whilst the scene was set rather well at the beginning, if anything caught my attention, I felt that it would be in the relationship which built up between Danny and the father, Robert, with whom he travels.  The latter picks up Danny whilst he is hitchhiking, and asks him to come along on the journey; he duly accepts.  Robert’s description of the trip, which he makes each year, and the passion which it strikes in him has been well evoked: ‘Tomorrow morning I’m going to come face to face with a bunch of bulls, Robert continues.  He taps the steering wheel.  I’ll be standing there on one of those streets in Pamplona, in my white shirt, together with all those other people in their white shirts.  Then they let the bulls out and you’d better start running’.  It is his pilgrimage of sorts.  ‘It’s a tradition, Robert continues.  It’s a celebration.  It’s danger.  It’s real life’.

I found a lot of the writing about Danny’s fights and preparation for them a little repetitive; perhaps deliberately so, I’m not entirely sure.  There was no wonder for me here; I did not connect with any of the characters, as I so often tend to do with Peirene’s novellas.  Whilst it was an okay read on the whole, it stirred no strong feelings within me, and it isn’t anything which I would recommend.

I used to use my Reading the World project as a BookTube feature, but at present, I have very little time to film, and am very behind schedule with it.  I thought that instead of forcing myself to film and edit, it would be easier to transition the project over to the blog.

For each country or region which I write about, I will give at least five books as recommendations, along with the official blurbs.  I must apologise for the lack of personal details as to why I selected each book going forward, but I am up against time constraints due to my Master’s.  I hope you can understand, and enjoy the recommendations!

We kick off with Holland, or The Netherlands, dependent on what you call it.

1. An Interrupted Life: The Diaries and Letters of Etty Hillesum, 1941-43 by Etty Hillesum (1999)
‘Etty Hillesum (1914-43) lived in Amsterdam, like Anne Frank, and like her she kept a diary. ‘All the writings she left behind,’ writes Eva Hoffman in her Preface to this edition of her diaries and letters, ‘were composed in the shadow of the Holocaust, but they resist being read primarily in its dark light. Rather, their abiding interest lies in the light- filled mind that pervades them and in the astonishing internal journey they chart. Etty’s pilgrimage grew out of the intimate experience of an intellectual young woman – it was idiosyncratic, individual, and recognisably modern… The private person who revealed herself in her diary was impassioned, erotically volatile, restless… Yet she had the kind of genius for introspection that converts symptoms into significance and joins self-examination to philosophical investigation… In the last stages of her amazing and moving journey, Etty seemed to attain that peace which passeth understanding… Finally, however, the violence and brutality she saw all around her overwhelmed even her capacity to understand… But by knowing and feeling so deeply and fully, an unknown young woman became one of the most exceptional and truest witnesses of the devastation through which she lived.”

2. Tales from the Secret Annex by Anne Frank

(2003)
‘The candid, poignant, unforgettable writing of the young girl whose own life story has become an everlasting source of courage and inspiration. Hiding from the Nazis in the Secret Annex of an old office building in Amsterdam, a thirteen-year-old girl named Anne Frank became a writer. The now famous diary of her private life and thoughts reveals only part of Anne s story, however. This book rounds out the portrait of this remarkable and talented young author. Newly translated, complete, and restored to the original order in which Anne herself wrote them in her notebook, Tales from the Secret Annex is a collection of Anne Frank s lesser-known writings: short stories, fables, personal reminiscences, and an unfinished novel, Cady s Life.”

3. The Goldfinch by Donna Tartt (Little, Brown and Company, 2013) (* Partially set in Holland)
Winner of the Pulitzer Prize
‘”The Goldfinch” is a rarity that comes along perhaps half a dozen times per decade, a smartly written literary novel that connects with the heart as well as the mind….Donna Tartt has delivered an extraordinary work of fiction.”–Stephen King, “The New York Times Book Review” Theo Decker, a 13-year-old New Yorker, miraculously survives an accident that kills his mother. Abandoned by his father, Theo is taken in by the family of a wealthy friend. Bewildered by his strange new home on Park Avenue, disturbed by schoolmates who don’t know how to talk to him, and tormented above all by his longing for his mother, he clings to the one thing that reminds him of her: a small, mysteriously captivating painting that ultimately draws Theo into the underworld of art. As an adult, Theo moves silkily between the drawing rooms of the rich and the dusty labyrinth of an antiques store where he works. He is alienated and in love–and at the center of a narrowing, ever more dangerous circle. The Goldfinch is a mesmerizing, stay-up-all-night and tell-all-your-friends triumph, an old-fashioned story of loss and obsession, survival and self-invention, and the ruthless machinations of fate.’