Some of the books I read as a child have deeply shaped who I am as a reader and a person today. Apart from the kid classics and the adventure tales, a huge majority of the books I consumed as a child belonged to the fantasy genre. Especially after the huge blast the release of the Harry Potter series brought along, a plethora of fantasy books targeted towards young audiences (and not only) suddenly became widely available. Of course, most of them were simply copies of the magic school trope, but there were a select few that managed to distinguish themselves from the mass and offer something entirely fresh and innovative. 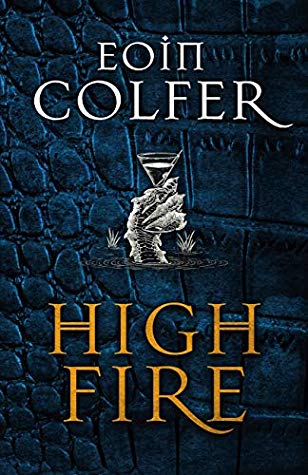 One of these books for me was the Artemis Fowl series by Eoin Colfer. Although I haven’t read the series since then, so I don’t know if I would still feel the same about it as an adult, these books were the first ones I had read that combined fantasy elements (fairies, gnomes, etc.) with high-tech technology and the prodigy teen protagonists I so used to love reading about.

But that was just a very lengthy introduction the purpose of which is simply to illustrate the importance Eoin Colfer’s books had for the juvenile me as a reader. Having read nothing else by the author for more than a decade, I was enthralled when I found out that he would be releasing a brand new fantasy book, for adults this time around.

Highfire is the story of the very last dragon on earth (nicknamed Vern from wyvern, as he’s not a large Game of Thrones type of dragon), who has successfully been hiding from humans in his ‘lair’ in Louisiana. That is until Squib Moreau, a teenager whom disaster tends to follow, accidentally finds out about his existence and a whole lot of chaos ensues.

The novel is teemed with Colfer’s well-known humour and casual writing style, as well as with his characteristic action-packed scenes. Although some readers might recognise traces of Colfer’s other characters in those of Highfire, it is actually rather evident that this book in not meant for children, as there is strong language throughout the book and some rather gory descriptions.

And now comes the difficult part. Although I did enjoy reading Highfire, and it did make me nostalgic about reading Colfer’s books as a kid, I was also slightly disappointed by it. At times, the language felt way too casual for my taste and it seemed like the only thing that made the story one geared towards adults was mostly the profanities and the gory descriptions.

This does not mean that Highfire is a bad book, not at all. It’s a very action-packed urban fantasy novel filled with humour and the classic good versus evil battle with a lot of twists. I am sure readers looking for a fantasy book that breaks the mould and differentiates itself from most fantasy that is out there will definitely enjoy reading about Vern and Squib’s shenanigans, as long as they know what sort of story they are getting into. I was falsely expecting a different type of story, and this is the main cause of my disappointment.

Have you read Highfire? What did you think of it? Have you read any of your favourite childhood authors as an adult and had a different opinion on their writing?

A copy of this book was very kindly provided to me by the publisher via NetGalley.