I have chosen Rose Tremain’s wonderful historical novel, The Colour, to kick off this edition of The Book Trail.  As ever, I am using the ‘Readers Also Enjoyed’ feature on Goodreads in order to generate this list.

1. The Colour by Rose Tremain 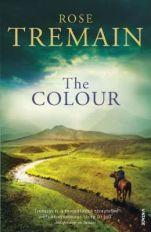 ‘Newlyweds Joseph and Harriet Blackstone emigrate from England to New Zealand, along with Joseph’s mother Lilian, in search of new beginnings and prosperity, but the harsh land near Christchurch where they settle threatens to destroy them almost before they begin. When Joseph finds gold in a creek bed, he hides the discovery from both his wife and mother and becomes obsessed with the riches awaiting him deep in the earth. Abandoning his farm and family, he sets off alone for the new goldfields over the Southern Alps, a moral wilderness where many others, under the seductive dreams of the “colour,” rush to their destinies and doom.‘

2. In the Forest by Edna O’Brien
‘Based on a horrendous true crime, In the Forest is the story of Mich O’Kane — ‘not all there in the head’ it’s said — who shoots three people dead in the woods of Ireland. Edna O’Brien traces the events that lead to such horror. Mich O’Kane hears voices; he cannot stop mourning the death of his mother. Theft and other crimes lead him to a Christian Brothers borstal, then to a British prison. By the time he returns home, he is an institutionalised criminal incapable of telling the truth even to himself. Single mother Eily lives with her young son Maddie in a house Mich camped out in after his mother’s death. One night, Mich drags them out of the house and orders Eily to drive to the forest. The third death is that of a priest he entreats to come to the murder site. This tragic and starkly terrible story is told from various points of view, including Eily’s, Mich’s granny’s, and a priest’s. But the core of the story is Mich, born to fail. Can there be any hope for him?‘

3. Schooling by Heather McGowan
‘Catrine Evans, a young American, is sent to an English boarding school after her mother dies of cancer. Memories of Isabelle, the best friend she left behind in Maine, give way to dreams haunted by images of an accidental death she believes they caused before she left for England.‘
4. Small Remedies by Shashi Deshpande
‘Shashi Deshpande’s latest novel explores the lives of two women, one obsessed with music and the other a passionate believer in Communism, who break away from their families to seek fulfilment in public life. Savitribai Indorekar, born into an orthodox Hindu family, elopes with her Muslim lover and accompanist, Ghulaam Saab, to pursue a career in music. Gentle, strong-willed Leela, on the other hand, gives her life to the Party, and to working with the factory workers of Bombay.  Fifty years after these events have been set in motion, Madhu, Leela’s niece, travels to Bhavanipur, Savitribai’s home in her last years, to write a biography of Bai. Caught in her own despair over the loss of her only son, Aditya, Madhu tries to make sense of the lives of Bai and those around her, and in doing so, seeks to find a way out of her own grief.‘
5. The Romantics by Pankaj Mishra

‘The young Brahman Samar has come to the holy city of Benares to complete his education and take the civil service exam that will determine his future. But in this city redolent of timeworn customs, where pilgrims bathe in the sacred Ganges and breathe in smoke from burning ghats along the shore, Samar is offered entirely different perspectives on his country. Miss West and her circle, indifferent to the reality around them, represent those drawn to India as a respite from the material world. And Rajesh, a sometimes violent, sometimes mystical leader of student malcontents, presents a more jaundiced view. More than merely illustrating the clash of cultures, Mishra presents the universal truth that our desire for the other is our most painful joy.‘
6. That They May Face the Rising Sun by John McGahern
‘It is a village flirting with the more sophisticated trappings of modernity but steeped in the traditions of its unforgettable inhabitants and their lives. There are the Ruttledges, who came from London in search of a different life on the edge of the village lake; John Quinn, who will stop at nothing to ensure a flow of women through his life; Jimmy Joe McKiernan, head of the local IRA as well as town auctioneer and undertaker; the gentle Jamesie and his wife, Mary, who have never left the lake and who know about everything that ever stirred or moved there; Patrick Ryan, the builder who never quite finishes what he starts; Bill Evans, the farmhand whose orphaned childhood was marked with state-sanctioned cruelties and whose adulthood is marked by the scars; and the wealthiest man in town, known as the Shah.  A year in the lives of these and other characters unfolds through the richly observed rituals of work and play, of religious observance and annual festivals, and the details of the changing seasons, of the cycles of birth and death. With deceptive simplicity and eloquence, the author reveals the fundamental workings of human nature as it encounters the extraordinary trials and pleasures, terrors and beauty, of ordinary life.‘

7. The Story of Lucy Gault by William Trevor
‘The stunning new novel from highly acclaimed author William Trevor is a brilliant, subtle, and moving story of love, guilt, and forgiveness. The Gault family leads a life of privilege in early 1920s Ireland, but the threat of violence leads the parents of nine-year-old Lucy to decide to leave for England, her mother’s home. Lucy cannot bear the thought of leaving Lahardane, their country house with its beautiful land and nearby beach, and a dog she has befriended. On the day before they are to leave, Lucy runs away, hoping to convince her parents to stay. Instead, she sets off a series of tragic misunderstandings that affect all of Lahardane’s inhabitants for the rest of their lives.‘

8. The Light of Day by Graham Swift
‘On the anniversary of a life-shattering event, George Webb, a former policeman turned private detective, revisits the catastrophes of his past and reaffirms the extraordinary direction of his future. Two years before, an assignment to follow a strayed husband and his mistress appeared simple enough, but this routine job left George a transformed man.  Suspenseful, moving, and hailed by critics as a detective story unlike any other, The Light of Day is a gripping tale of murder and redemption, as well as a bold exploration of love and self-discovery. ‘

Have you read any of these books?  Which pique your interest?