My second stop on my 2018 travel list is America; I travelled to the Niagara Falls State Park in New York State whilst on holiday in Canada.  Here are seven of my favourite books set in various states around the US.

1. To Kill a Mockingbird by Harper Lee (1960)
‘The unforgettable novel of a childhood in a sleepy Southern town and the crisis of conscience that rocked it, To Kill A Mockingbird became both an instant bestseller and a critical success when it was first published in 1960. It went on to win the Pulitzer Prize in 1961 and was later made into an Academy Award-winning film, also a classic.  Compassionate, dramatic, and deeply moving, To Kill A Mockingbird takes readers to the roots of human behavior – to innocence and experience, kindness and cruelty, love and hatred, humor and pathos. Now with over 18 million copies in print and translated into forty languages, this regional story by a young Alabama woman claims universal appeal. Harper Lee always considered her book to be a simple love story. Today it is regarded as a masterpiece of American literature.‘

2. The Grapes of Wrath by John Steinbeck (1939)
‘First published in 1939, Steinbeck’s Pulitzer Prize winning epic of the Great Depression chronicles the Dust Bowl migration of the 1930s and tells the story of one Oklahoma farm family, the Joads, driven from their homestead and forced to travel west to the promised land of California. Out of their trials and their repeated collisions against the hard realities of an America divided into haves and have-nots evolves a drama that is intensely human yet majestic in its scale and moral vision, elemental yet plainspoken, tragic but ultimately stirring in its human dignity.  A portrait of the conflict between the powerful and the powerless, of one man’s fierce reaction to injustice, and of one woman’s stoical strength, the novel captures the horrors of the Great Depression and probes the very nature of equality and justice in America.‘
3. The Secret Life of Bees by Sue Monk Kidd (2001)

‘Set in South Carolina in 1964, The Secret Life of Bees tells the story of Lily Owens, whose life has been shaped around the blurred memory of the afternoon her mother was killed. When Lily’s fierce-hearted black “stand-in mother,” Rosaleen, insults three of the deepest racists in town, Lily decides to spring them both free. They escape to Tiburon, South Carolina–a town that holds the secret to her mother’s past. Taken in by an eccentric trio of black beekeeping sisters, Lily is introduced to their mesmerizing world of bees and honey, and the Black Madonna. This is a remarkable novel about divine female power, a story women will share and pass on to their daughters for years to come.‘
4. The Catcher in the Rye by J.D. Salinger (1951)
‘The hero-narrator of The Catcher in the Rye is an ancient child of sixteen, a native New Yorker named Holden Caulfield. Through circumstances that tend to preclude adult, secondhand description, he leaves his prep school in Pennsylvania and goes underground in New York City for three days. The boy himself is at once too simple and too complex for us to make any final comment about him or his story. Perhaps the safest thing we can say about Holden is that he was born in the world not just strongly attracted to beauty but, almost, hopelessly impaled on it. There are many voices in this novel: children’s voices, adult voices, underground voices-but Holden’s voice is the most eloquent of all. Transcending his own vernacular, yet remaining marvelously faithful to it, he issues a perfectly articulated cry of mixed pain and pleasure. However, like most lovers and clowns and poets of the higher orders, he keeps most of the pain to, and for, himself. The pleasure he gives away, or sets aside, with all his heart. It is there for the reader who can handle it to keep. ‘

5. The Glass Menagerie by Tennessee Williams (1945)
‘Abandoned by her husband, Amanda Wingfield comforts herself with recollections of her earlier, life in Blue Mountain when she was pursued by ‘gentleman callers’. Her son Tom, a poet with a job in a warehouse, longs for adventure and escape from his mother’s suffocating embrace, while Laura, her daughter, has her glass menagerie and her memories.‘
6. The Bell Jar by Sylvia Plath (1963)
‘Sylvia Plath’s shocking, realistic, and intensely emotional novel about a woman falling into the grip of insanity.   Esther Greenwood is brilliant, beautiful, enormously talented, and successful, but slowly going under—maybe for the last time. In her acclaimed and enduring masterwork, Sylvia Plath brilliantly draws the reader into Esther’s breakdown with such intensity that her insanity becomes palpably real, even rational—as accessible an experience as going to the movies. A deep penetration into the darkest and most harrowing corners of the human psyche, The Bell Jar is an extraordinary accomplishment and a haunting American classic.‘
7. One Summer: America 1927 by Bill Bryson (2013; review here)

‘Britain’s favourite writer of narrative non-fiction Bill Bryson travels back in time to a forgotten summer when America came of age, took centre stage, and, in five eventful months, changed the world for ever.  In the summer of 1927, America had a booming stock market, a president who worked just four hours a day (and slept much of the rest of the time), a semi-crazed sculptor with a mad plan to carve four giant heads into an inaccessible mountain called Rushmore, a devastating flood of the Mississippi, a sensational murder trial, and a youthful aviator named Charles Lindbergh who started the summer wholly unknown and finished it as the most famous man on earth. (So famous that Minnesota considered renaming itself after him.)  It was the summer that saw the birth of talking pictures, the invention of television, the peak of Al Capone’s reign of terror, the horrifying bombing of a school in Michigan by a madman, the ill-conceived decision that led to the Great Depression, the thrillingly improbable return to greatness of a wheezing, over-the-hill baseball player named Babe Ruth, and an almost impossible amount more.  In this hugely entertaining book, Bill Bryson spins a story of brawling adventure, reckless optimism and delirious energy, with a cast of unforgettable and eccentric characters, with trademark brio, wit and authority. ‘

Have you read any of these?  Which, if any, take your fancy?

‘Long before they became famous writers, Truman Capote (“In Cold Blood”) and Harper Lee (“To Kill a Mockingbird”) were childhood friends in Monroeville, Alabama. This fictionalized account of their time together opens at the beginning of the Great Depression, when Tru is seven and Nelle is six. They love playing pirates, but they like playing Sherlock and Watson-style detectives even more. It s their pursuit of a case of drugstore theft that lands the daring duo in real trouble. Humor and heartache intermingle in this lively look at two budding writers in the 1930s South.’

To Kill a Mockingbird is still my favourite novel of all time; I still remember how awestruck I was at its beauty when I first read it as a nine-year-old.  I’m a big fan of Truman Capote’s too; I have read all of his work at this juncture, and have adored almost all of it.  When I found out about G. Neri’s fictionalised account of the childhoods of Nelle Harper Lee and Truman Streckfus Persons – Nelle and Tru – then, I just had to read it. 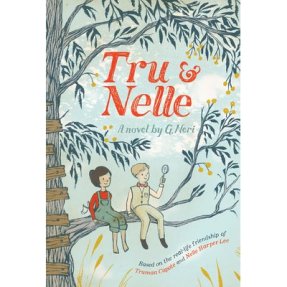 The opening paragraph which Neri has crafted sum the pair up perfectly: ‘When Truman first spotted Nelle, he thought she was a boy.  She was watching him like a cat, perched on a crooked stone wall that separated their rambling wood homes.  Barefoot and dressed in overalls with a boyish haircut, Nelle looked to be about his age, but it was hard for Truman to tell – he was trying to avoid her stare by pretending to read his book’.

The entirety of Tru & Nelle is beautifully written, and Monroeville immediately springs into vivid life.  Neri has a deft hand in appealing to all of the senses from the outset, and one is soon aware of the sights and smells which made up the worlds of the children.  A lot of factual information about the pair has been slipped in, making Tru & Nelle feel incredibly realistic.  Although the book is aimed at a younger (‘juvenile’) audience, in no way does the prose feel simplistic or dumbed down.  The mystery element which was woven in worked very well, and gave an extra layer of focus to the whole.  The dialect is handled well, and the novel is well stylised; entertaining, evocative, creative, and historically accurate.  A must-read for all fans of Tru and Nelle’s.

I begin this post with a question: what is the first adult novel which you remember reading?  As a child, I always had my nose within the pages of Enid Blyton and C.S. Lewis, and had a slight error at the age of seven, when I decided that Moby-Dick looked as though it would keep me busy for a while, and began it only to put it down soon afterwards.

At the age of eight, however, I vividly remember reading both Jane Eyre and To Kill a Mockingbird – the first my own choice, and the second a gift from my father – and immediately feeling as though I had unlocked a whole new world of wonders.  I swiftly followed these wonderful novels, enduring favourites of mine, with the likes of Wuthering Heights and A Christmas Carol, and haven’t looked back since.

Are the first adult novels which you read classed amongst your current favourites?  If you remember, what made you select the adult books which you did as a child or teenager?