Fried Green Tomatoes at the Whistle Stop Cafe by Fannie Flagg ****
I had heard such great things about this novel that when I spotted it in Fopp, I just had to purchase a copy.  I am probably one of the few people who has not seen the film, which seems to be very popular, but after reading the book I can definitely see why it is.  The novel was first published in 1987, and is the first of Flagg’s works which I have read.  Harper Lee (one of my most treasured authors) calls it ‘a richly comic, poignant narrative’, and from the moment at which I spotted this upon the book’s lovely cover, I was almost entirely convinced that I would very much enjoy it.

Fried Green Tomatoes at the Whistle Stop Cafe begins in Alabama in June 1929, a period and literary setting which I adore. The parallel story which runs alongside it begins in December 1985, in the Rose Terrace Nursing Home in the same state.   Both present and past stories are interspersed with weekly news bulletins from 1929.  This mixed narrative works well; it gives a real feel for the place in which the story is set, and its history, almost immediately.  It is clear that the notion of community is so important to Flagg, and it really comes across in the story which she has created. There was a real sense of warmth within some of the characters, and it was made entirely clear that those like Idgie – one of the main protagonists, and the co-owner of the Whistle Stop Cafe – were both revered and respected within their community.  I loved how headstrong she in particular was.

It looks rather a chunky book – indeed, the Vintage edition which I read runs to just over five hundred pages – but it is a surprisingly quick read.   Flagg’s style is very easy to get into, and the novel itself is sweet and rather heartwarming.  I would certainly recommend it to fans of Kathryn Stockett’s The Help, the novel which I was reminded of throughout.

The Big Sleep by Raymond Chandler ***
I decided to read this hardboiled crime novel purely because it is one of Mark Hoppus of Blink 182’s favourites.  I can tell why he likes it, as throughout it felt like an incredibly masculine book.  The novel, first published in 1939, tells of a detective who often seems rather detached from the cases in which he dabbles.  Oddly, I found it devoid of emotion at times, and the behaviour which the characters demonstrated sometimes felt bizarre and inconsistent.  The protagonist, Philip Marlowe, reminded me somewhat of Dexter from Jeff Lindsay’s novels.  The most interesting aspect of The Big Sleep for me was its storyline.  It is quite unlike much of the crime literature which I have been reading of late, so in that respect I am glad that I can add  a Chandler novel to my read list.  The prose was so sparse throughout, however, that I do not think I will rush to read more of  Chandler’s work, but I would like to view the film of the same name to see how it compares. 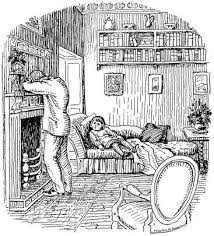 One of Gwen Raverat’s illustrations from ‘Period Piece’

Period Piece: A Cambridge Childhood by Gwen Raverat ***
Cambridge is my local city, and it is one which I absolutely adore.  I will happily read anything which is set within it.  This was recommended to me by Lucy (thank you, Lucy!), who told me that it was an absolutely lovely book, and one which was well worth a read.

Gwen Raverat is the granddaughter of Charles Darwin, so along with the setting, the anthropological aspect interested me too.  The places which she describes throughout are familiar to me, and I loved being able to picture the scenes exactly as they are and, in most cases, how they have remained for centuries.  Throughout, lovely illustrations can be found, all of them by Raverat herself.

On reflection, Period Piece was not as I had expected before I began it.  I thought that it would be quaint and would focus more upon growing up in Cambridge than upon Raverat’s multitudinous collection of relatives, some of whom were wonderfully eccentric, but others whom were rather dull.  It was rather more of a familial than a geographical memoir, I suppose.  The book is certainly interesting with regard to the scenes which it paints, but I cannot help but feel a little disappointed by it, feeling as it did a tiny bit lacklustre at times.  Its charm was not quite consistent enough to make this a stand-out memoir.  Period Piece is certainly of worth to the modern reader in the sense that one can see how social attitudes have altered, but not as much more in the case of this reviewer.  Still, I certainly did not dislike it, so it receives a wholesome three stars.