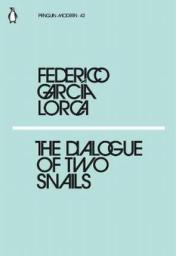 I was looking forward to trying a selection of Federico Garcia Lorca’s poetry, having never read any of his work before.  The 42nd Penguin Modern, The Dialogue of Two Snails, is described as ‘a dazzling selection of the beautiful, brutal and darkly brilliant work of Spain’s greatest twentieth-century poet.’

The collection, which has been translated by Tyler Fisher, contains work which appears in English for the first time, and presents a ‘representative sampling of [his] poetry, dialogues, and short prose.’  The poems collected here also appear with the dates in which they were written, which I think is a useful touch.

Other reviewers have commented that the placing of poems here feels disjointed, and that the quality of the translation renders the poems stilted.  I have no reference points with which to compare Garcia Lorca’s work, and so I did not let this affect my reading of The Dialogue of Two Snails.

As I find with many collections, there were poems here which I didn’t much like, and others which I thought were great.  Some of Garcia Lorca’s ideas are a little bizarre and offbeat, but I am definitely intrigued enough to read more of his work, and to see how the translations compare.  Some of what he captures here is lovely, and so vivid, and I enjoyed the diversity of the collection.  As ever, I will finish this poetry review by collecting together a few fragments which I particularly enjoyed.

From ‘The Encounters of an Adventurous Snail’:
There is a childlike sweetness
in the still morning.
The trees stretch
their arms to the earth.

From ‘Knell’:
The wind and dust
Make silver prows.

‘Seashell’:
They’ve brought me a seashell.

It’s depths sing an atlas
of seascapes downriver.
My hear
brims with billows
and minnows
of shadows and silver.

They’ve brought me a seashell.