A fan as I am of books about books, it was inevitable that at some point, I would pick up The Bookshop Book by Jen Campbell.  I very much enjoyed her brief Weird Things Customers Say in Bookshops series, which featured myriad encounters with odd and amusing customers.  These books were written Campbell herself was working in Ripping Yarns, a now sadly closed bookshop in London.  The Bookshop Book was published as the official book of the Books Are My Bag campaign in 2014, and it is a shame that it has taken me such a long time to pick up a copy.

The aim of the book is as follows: ‘From the oldest bookshop in the world, to the smallest you could imagine, The Bookshop Book explores the history of books, talks to authors about their favourite places, and looks at more than three hundred weirdly wonderful bookshops across six continents.’  It is, essentially, ‘a love letter to bookshops all around the world.’

In her introduction to the volume, Campbell argues for the importance of bookshops and physical books in our increasingly digital world.  She writes: ‘We’ve now reached the twenty-first century through a period of intense change for the book industry in recent years, with the rise of chain bookshops soon followed by their swift decline, the exponential growth of online shopping and the invention of the e-reader.  So much has changed, indeed, that a lot of people have again been asking: are physical books and bookshops still relevant?  But when so much of our lives is spent on computers, dealing with concepts and files that we can’t actually hold in our hands, the idea of a shopping experience, and of a physical book, is perhaps more important than ever before.’  Campbell then goes on to point out that such momentous changes have actually offered a positive for booksellers too: ‘It’s an exciting time for bookshops: they’re fighting harder than perhaps they’ve ever had to; consequently they’ve become more inventive than they’ve ever had to be.’

Campbell writes with a great deal of warmth, and is both informative and chatty.  One recognises throughout the author’s adoration of bookshops, both new and secondhand.  As well as pointing out interesting and lovely bookshops, she speaks to authors and bookshop owners, talks of her own experiences of working as a bookseller, and talks to the odd customer.  In each of these entries, the pleasure which books, and particular shops, bring is discussed.  Author Kirsty Logan, for instance, writes: ‘Teenage years are some of the hardest of our lives, but those years among books helped me through.  In any chaos, there was always comfort in stories: they took me out of myself and helped me understand who I was and who I wanted to be.  Whatever your problems, a book is a point where you can stop in a moving world.’  Among other authors interviewed here are Jacqueline Wilson, Ali Smith, Emma Donoghue, Joanne Harris, Cornelia Funke, David Almond, Tracy Chevalier, Andrew Kaufman, and John Connolly.

Eleanor Davies, who owns a bookshop named Linghams in Heswall, Merseyside, tells Campbell of the restorative power of being among books in a bookshop environment: ‘It is quite noticeable how often a customer comes in at a crucial moment in his or her life: this is frequently the time when people are seeking out books to help them through a crisis…  Bookshops are places where people congregate.  Some of the people who pass through the doors do so on an almost daily basis, because they have found a warm and empathetic reception and a place where they can bring their troubles.  For them, bookshops are safe places.’

Campbell’s tome has been so nicely put together.  The narrative of The Bookshop Book is also interspersed with a series of ‘Bookish Facts’.  A lot of these seem to be common knowledge, but there were certainly some surprises nestled in.  One of these, for instance, focuses upon Cogito Books in Hexham, in the north of England, which ‘sponsors its local choir, who in turn visit at Christmas to fill the bookshop with carols.’  There are other lovely stories dotted throughout the book, which tell of thoughtful customers, and little touches which serve to make bookshops unique and distinctive.  There are also a few mentions of amusing inscriptions found in secondhand books.  Some of the bookshops which have been included here are not quirky, as the book sometimes makes out, but all have a story to tell.

The book has been split into sections which relate to each continent.  The one on Europe is vast, with many of the entries concentrated on England and Scotland, and for other continents, there are only a handful of entries.  Even for Northern Ireland and the Republic of Ireland, there are just a few inclusions.  One might expect an English author to concentrate on bookshops which they are familiar with, and have visited.  However, as places around the world have been included, there is unfortunately a real sense of imbalance within the book.  Some countries, even in the European section, have just a couple of entries; others are entirely absent.  Whilst I understand that it would have been an arduous and long-winded task to include the same amount of bookshops in each continent, I cannot help but feel as though not doing so was a missed opportunity.  The appeal to a more global audience – indeed, even one outside England and Scotland – has been missed somewhat in Campbell’s approach here. I appreciate what Campbell was trying to do in going for this worldwide approach, but after one moves past the UK section, it does often feel a little bitty.  There are many states of America which have been missed out, for example, and only four bookshops are included in the entirety of Central and South America.  I feel as though the book would be more successful had it focused only upon those bookshops which Campbell herself has visited.  The entries could therefore be tailored to a more personal approach, perhaps mentioning a couple of tomes which Campbell purchased in each place, for instance.

Despite this flaw, I love the idea of this tome, and the things which it sets out to do.  The Bookshop Book is a great handbook for any book lover to have, and everyone is sure to discover somewhere new to explore.  It is sure to make a lovely, and thoughtful, gift.  I found it a heartwarming read, which has rekindled my appreciation of the physical bookshop.  It is too easy, in the modern world, to search for a cheap copy of a secondhand book online and have it delivered straight to your door, but in doing so, you undoubtedly lose the joy of browsing, and of discovery.  Saying that, there is a real sadness in the fact that in the four years since the publication of The Bookshop Book, quite a few of the establishments which Campbell focused upon have shut down.

I shall end this review with a wonderful quote by Ali Smith, who writes: ‘The days when we sit down with a book so good we don’t get up until it’s read – those are some of the best days of our lives.’

The culmination of this year’s Books Are My Bag celebration takes place today across the United Kingdom.  For three glorious days (the campaign began on Thursday the 9th of October), we 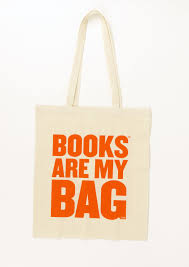 can officially celebrate our bookshops, and the wonders which we bookworms never fail to find inside them.

The official website cites the reasons for the Books Are My Bag campaign as follows: ‘BOOKS ARE MY BAG is a nationwide campaign to celebrate bookshops. This collaboration between publishers, bookshops and authors and is the biggest ever promotion of bookshops. For many people bookshops conjure fond images of book readings, in-store cafes and delight at the discovery of a new author. In fact, 56% of all book buying decisions are made by consumers in a bookshop and high street bookshops (both chains and independents) still account for almost 40% of books bought by consumers. Yet, many high street bookshops are under threat.’

This year’s campaign sees the publication of a special book, The Bookshop Book by Jen Campbell, author of

Weird Things Customers Say in Bookshops and More Weird Things Customers Say in Bookshops (my review can be found here).  In her book, Campbell discusses quirky bookshops which can be found around the world – those in converted barns and churches, and even in underground carparks.  It sounds absolutely marvellous, and I for one can’t wait to get my hands on a copy.  You can order yours here.