I came across Miranda Kaufmann’s Black Tudors: The Untold History whilst browsing my library’s online catalogue, and duly reserved it.  Whilst I studied the Tudor period in some detail at school, I have largely focused on more modern historical periods since.  However, I am always eager to learn, and was keen to read about a largely unknown-to-me element of a fascinating era. 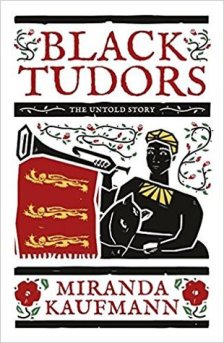 Black Tudors is called variously, in the numerous reviews sprinkled over its cover, ‘alive with human details and warmth’, ‘a work of brilliant sleuthing’, and a book which ‘promises to change perceptions of a period at the heart of Britain’s national identity’.  These reviews served to intrigue me further.

Kaufmann has pieced together Black Tudors by using ‘long-forgotten records’ of ‘the remarkable stories of Africans who lived free in Tudor England.’  She has split her narrative into ten distinct chapters, each of which turns its focus to a particular individual – essentially, each forms a case study.  These range from trumpeter John Blanke to Anne Cobbie, a prostitute who was known widely as ‘the Tawny Moor with Soft Skin’.  Early on, Kaufmann highlights: ‘In many ways, their lives were no worse than those of the vast majority of Tudors… but this was the result of having no social standing, not of having dark skin.’  Whilst many Africans were enslaved during this era, some had their freedom, and were able to exercise it.

Each chapter begins with a page-long imagined narrative of the individual.  In the case of salvage diver Jacques Francis, for instance, who worked on the shipwreck of the Mary Rose, Kaufmann writes: ‘That was why he was here, why the King had hired his master: to salvage the expensive weaponry.  The Venetian could not dive this deep himself and so he’d found Jacques, and the other divers in his team, and brought them to this cold island to perform a miracle for the English King.’  I did not personally feel as though these sections were necessary; they added very little background, and much of what they said was repeated later on in the chapter.  Whilst I appreciated the range of professions which these individuals held, I did not learn a great deal about them, really.

In her introduction, Kaufmann notes: ‘Despite the insatiable appetite for all things Tudor, from raunchy television series to bath ducks modelled as Henry VIII and Anne Boleyn, the existence of the Black Tudors is little known.’  Having read Kaufmann’s book from cover to cover, I think it is fair to say that this is still a little known element of Tudor history.  Whilst more is known about some subjects than others, there is so much speculation at play – how an individual came to Britain in the first place, and the routes which this entailed; their marriage partners; what happened to them when they no longer appeared in court records…

Due to a general lack of records throughout this era, a lot of what Kaufmann writes is purely speculative.  There is little concrete information which she had to work from, and therefore much of Black Tudors could be said to be more of an imagined narrative than a work of history.  There are so many instances of ‘maybe’ and ‘perhaps’ here that sometimes one wonders why Kaufmann tried to focus on the black Tudors at all.

The prose of Black Tudors is definitely accessible, but it never really felt as absorbing as I like history books to be.  I learnt some things, but nowhere near as much as I expected to when I started to read.  I did appreciate that Kaufmann continually cites the historical context of the period, but this often overshadows the individual whom she is trying to focus on; they largely get lost in the minutiae of Tudor life.  The real information which has been used in Black Tudors is often so scant that really, the book reads like a generalised history of the period.  Much of which makes up each chapter scarcely touches upon the individual in question.

Black Tudors does not achieve what it sets out to.  I completely understand that there is comparatively little by way of sources available, but the title of the book is rather misleading.  There is an admirable amount of research and subject knowledge here, but in a more generalised manner.  This history book is not what I was expecting.  Although it has a lot of good information on the Tudor population as a whole, it does not know enough about any of the individuals which it tries to focus upon; therefore, they have no way of feeling like realistic beings, who really existed.

Black Tudors ultimately feels quite muddled, and I did not really enjoy the tangents which Kaufmann often diverts to.  These make the narrative feel fractured and fragmented, and it is sometimes difficult to pick up individual threads of the stories of the individuals in consequence.  Whilst I read some parts of Black Tudors with a great deal of interest, for me as a reader, it really missed the mark.