I was thoroughly impressed by Lucy Caldwell’s short story collection, Multitudes, which I recently reviewed.  I was therefore even more keen than I had previously been to see which stories she had selected for an edited collection, entitled Being Various: New Irish Short Stories.

When skimming through the contents page of Being Various in my local library, I found a lot of authors whom I had never heard of; this is something which I love in thematic anthologies such as this one.  Amongst the new-to-me names were quite a lot of authors whom I already know and admire – Danielle McLaughlin, Louise O’Neill, Belinda McKeon, Eimear McBride, Sally Rooney, and Sinead Gleeson are particular favourites. 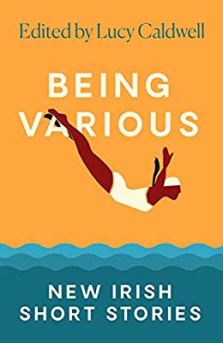 In Being Various, Caldwell was keen to bring together contributors from Northern Ireland and the Republic, all of whom have been published since the Good Friday Agreement.  The stories here have been specially commissioned for this anthology, and therefore cannot be found anywhere else.  In her introduction, Caldwell comments: ‘Ireland is going through a golden age of writing: that has never been more apparent.  I wanted to capture something of the energy of this explosion, in all its variousness…  Writers who are truly the inheritors of Bowen and O’Faolain, telling twenty-first-century stories with effortless elegance and grace.’

Caldwell goes on to reflect: ‘I thought about how far Ireland has come in my lifetime and how far it has to go.’ She wanted to highlight this, and welcomed tales of ‘subjects that have long been unspoken or dismissed or taboo, with a ferocity and unsentimentality that’s breathtaking.’  Indeed, the stories deal with a lot of pivotal and topical themes – puberty, separation, change, eating disorders, death; what it means to belong, and to grow up, and to feel.

There is some really beautiful writing to be found within Being Various.  In ‘A Partial List of the Saved’, for instance, author Danielle McLaughlin writes: ‘The last time they’d travelled this road it had been summertime, not a dull day like this one, but a glorious day with the sun beating down… and bodies, eerily pale, prostrate on lawns like pieces of salt cod left to dry.  Today the fields were shrouded in drizzle.  The light was otherworldly, silver on the distant surface of the bog lakes.’

I find Irish fiction entirely engaging, and this short story collection reminded me why.  There are so many moments of clear-eyed brilliance here; so many fully-formed characters; so much emphasis upon what makes up real life.  There are characters who move to Ireland and away, and some who return to it.  The focus of Louise O’Neill’s ‘Legends’ is a young girl with an eating disorder, her ‘waistbands skimming empty spaces where flesh used to reside, the number on the weighing scales decreasing every day’; Elske Rahill’s ‘Stretch Marks’ has at its heart a woman set adrift by her latest pregnancy: ‘The baby shifts under her skin, hooking a piece of itself into her rib – a hand or a foot.  It must be mid-afternoon at least.  Thursday afternoon.  Beside the bed, two slices of toast have cooled and warped.’

Being Various presents a bold collection of stories, the majority of them realist, but with a little magical realism creeping in from time to time.  Every single story captured my attention, and I found a lot to enjoy here, and a lot to admire.  Even those which I did not like as much were very good stylistically.  The stories are so diverse that they can be read one after another, and still be entirely memorable.  There is striking imagery, and a lot of hard-hitting content, and I cannot recommend Being Various enough.