I had not heard of Kingdom of Olives and Ash: Writers Confront the Occupation before spotting it in my local Fopp store.   I felt as though this collection of essays, which all revolve around the Israeli military’s occupation of Palestine, was worthy of an extended review.  Whilst I knew quite a bit about the situation and its history before picking the book up, I am always eager to learn, and hoped that it would fill in the gaps which I was certain I had. 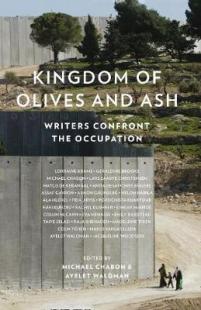 Edited by husband and wife team Michael Chabon and Ayelet Waldman, who also contribute an essay each, Kingdom of Olives and Ash brings together twenty-six pieces by a variety of celebrated authors, most of them novelists, from all over the world.  Each was offered a trip to the occupied zone, and was invited to write about whatever it was that struck them the most on their travels.  Their work, viewed both separately and collectively, ‘shows the human cost of fifty years of Israeli occupation of the West Bank and Gaza.’  These ‘perceptive and poignant essays’, says the book’s blurb, ‘offer unique insight into the narratives behind the litany of grim destruction broadcast nightly on the news, as well as a deeper understanding of the conflict as experienced by the people who live in the occupied territories.’

Chabon and Waldman are frank in their introduction.  They write: ‘We didn’t want to edit this book.  We didn’t want to write, or even think, in any kind of sustained way, about Israel and Palestine, about the nature and meaning of occupation, about intifadas and settlements, about whose claims were more valid, whose suffering more bitter, whose crimes more egregious, whose outrage more justified.  Our reluctance to engage with the issue was so acute that for nearly a quarter of a century we didn’t even visit the place [Jerusalem] where Ayelet was born.’  1992, they go on to discuss, was the first time in which they visited Israel together.  This was a ‘time of optimism, new initiatives, relative tranquility.’

Despite enjoying their trip, and believing that they would often return, they did not get the opportunity to do so for over twenty years.  As violence escalated following their visit, they remark: ‘Horrified and bewildered by the blur of violence and destruction, of reprisal and counter-reprisal and counter-counter-reprisal, put off by the dehumanizing rhetoric prevalent on both sides, we did what so many others in the ambivalent middle have done: we averted our gaze.  We opted out of the debate, and stayed away from the country.’  Following an invitation to a writers’ festival, Ayelet returned to Israel by herself in 2014, where she also visited Hebron and Tel Aviv: ‘The city sparkles, it hums.  And it averts its gaze.  One would never know, on the streets of Tel Aviv, that an hour’s drive away, millions of people are living and dying under oppressive military rule.’

As the project for Kingdom of Olives and Ash began to take shape, the editors speak of how they selected a vast array of contributors for the volume, in order to make the collection as far-reaching as was possible.  The core idea was this: ‘Conscious of the imminence of June 2017, the fiftieth anniversary of the occupation, we put the word out – to writers on every continent except Antarctica, of all ages and eight mother tongues.  Writers who identified as Christian, Muslim, Jewish, and Hindu, and writers of no religious affiliation at all.  Some had already made clear and public their political feelings on the subject of Palestine-Israel, but most had not, and many acknowledged from the outset that they had never really given the subject more than a glancing consideration.’

I had heard of a lot of the authors collected here, and was familiar with some of their work.  I was particularly excited to read essays by Anita Desai, Eimear McBride, and Geraldine Brooks, all writers whose novels I admire.  There were a few writers who were new to me, too.  Some of these authors were invited to stay at houses in Palestinian refugee camps and villages, and some spoke to civilians about their experiences.  Others explored cities, some tried to cross the many checkpoints strewn over a small area, and still others interviewed those working in factories or on archaeological sites.  There are many tragic stories told here, as one might expect given the circumstances.  The contributors variously meet advocates for peace and change, artisans cultivating ancient practices (soap making, for instance), students, bereaved parents, non-conformists, and taxi drivers who have to navigate the checkpoints many times each day.

I enjoyed and engaged with several of the essays in Kingdom of Olives and Ash, but others did not capture my attention in the same way.  The pieces which I particularly enjoyed tended to be written by the authors which I wasn’t already overly familiar with.  Jacqueline Woodson’s essay, ‘One’s Own People’, in which she contrasts her privileged, shielded life in New York with those she sees lived in occupied territory, was particularly striking.  She writes: ‘I knew the Palestine-Israel of newspaper articles and television journalism.  This Palestine-Israel was as foreign to me as Yemen, a place somewhere out there where people who had no connection to me fought among themselves – and killed others.  People who were not 100 percent people…  how could they be?  They were outside my very comfortable America.  Outside anything I could – or needed to – imagine.’  I also very much enjoyed Norwegian author Lars Saabye Christensen’s ‘Occupied Words’, which considers the language which we use: ‘And when our language is occupied, attitudes change too, and sometimes the distance from attitude to action is short.  The front lines move quicker than the thought.  We can’t keep up.’

Of course, there are elements of interest in each and every essay here, but I found some of the writing styles a little awkward in their choice of prose, overly and unnecessarily sensationalised, or not to my taste.  I found the essays which focus on one individual, or one family, particularly intriguing and accessible.  Others, like Madeleine Thien’s, are overly fact-heavy, and took far longer to read and consider.

Kingdom of Olives and Ash is certainly not an easy read, but it is a challenging and important one.  A lot has been explored here.  I had intended to read the book all in one go, but it proved far better to read and consider one or two essays each day over an extended period.  Much of the information here needed time to settle.  I found this varied collection a little uneven at times, but overarchingly, the pieces are interesting and informative, and form rather an essential whole.