Of late, I have read several books which disappointed me on many levels.  Some of them I was very much looking forward to, or was intrigued by, and others are by authors I have previously enjoyed.  Have you read any of these?  If so, what did you think of them?  Which books have disappointed you lately?

1. Oscar and Lucinda by Peter Carey
I had heard mixed criticism about Carey’s work, and decided to dip into his oeuvre for the first time with this novel.  I found it rather disinteresting and oddly paced, and it never did pick up.  The entirety felt very disconnected, and the relationships forged within the story were nowhere near strong enough to save the book for me.

2. 2am at the Cat’s Pajamas by Marie-Helene Bertino

I was so looking forward to this one, and found it quite mediocre.  I still gave it three stars overall, as I found the main character rather endearing in places, and liked her story, but felt that those of other characters, whilst important on the whole, were rather disinteresting.  Nothing in Bertino’s writing style sparkled for me either.

3. His Mouth Will Taste of Wormwood and Other Stories by Poppy Z. Brite
My first taste of Brite’s work left rather a sour taste in my own mouth.  The sexual explicitness was too much at times, and I found that the odd elements of each of the stories were jarring.  It is both gross and gruesome – too much so for this squeamish reader, anyway! 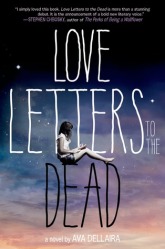 4. Love Letters to the Dead by Ava Dellaira
Note to self: stop buying books from genres you never read just because BookTube tells you to do it.  Again, I gave this three stars because I liked the general idea and it kept me relatively entertained on part of a long flight to Kuala Lumpur, but it says something when the dead characters in a book feel far more present than the ‘live’ ones.

5. My Name is Lucy Barton by Elizabeth Strout
I found Olive Kitteridge a very interesting and memorable read.  I was slightly disappointed by The Burgess Boys, but liked it well enough.  In this case, I have no idea what happened with My Name is Lucy Barton.  It is distinctly underwhelming, silly and farcical.