The stories in Apple and Knife, the first English collection of award-winning Indonesian author Intan Paramaditha’s work have been drawn from two of her books, and are translated by Stephen J. Epstein.  Paramaditha’s tales are inspired by fairytales, mythological stories, and horror, and this collection promises its readers an ‘unsettling ride that swerves into the supernatural to explore the dangers and power of occupying a female body in today’s world.’  Its blurb also claims that the collection ‘is subversive feminist horror at its best, where men and women alike are arbiters of fear, and where revenge is sometimes sweetest when delivered from the grave.’ 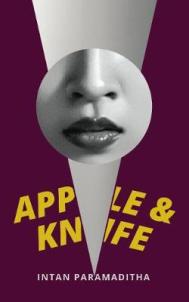 Apple and Knife is a slim collection of thirteen stories, many of which have quite beguiling titles; ‘The Blind Woman Without a Toe’, ‘Scream in a Bottle’, and ‘A Single Firefly, a Thousand Rats’ particularly caught my eye.  Australian author Emily Bitto writes that the stories in Apple and Knife ‘are raw, fun, excessive, and told with a wink, but they are underlaid with an unsettling awareness of the human fate of “disobedient women”.’

As one would expect, given Bitto’s comments, the collection launches straight into the darker side of life.  The first story, ‘The Blind Woman Without a Toe’, is a retelling of Cinderella (renamed Sindelerat), which is told from the perspective of one of her sisters.  In the story, the narrator recounts, rather graphically, how she became blind to a young child companion: ‘My eyes were pecked out by a bird.  They say it was a dove from heaven, but it was actually a black crow straight out of hell.  I screamed.  I begged it to stop.  But my shrieks were drowned out by its caws.  It got to the point that you could no longer tell what was flowing, tears or blood.  The crow only heeded its owner and she wasn’t satisfied until my eyes were hollow sockets.’

The settings of the stories in Apple and Knife, which range from corporate boardrooms to shanty towns, ‘reveal a soupy otherworld stewing just beneath the surface.’  The majority of the stories are set in Indonesia, but there are a couple which do not explicitly mention their placement, or which are set elsewhere.  Each of the characters, regardless of where they have been placed geographically, is undergoing a crisis or upheaval of some kind, and this becomes the common thread which acts as a backbone for the collection.  The characters in Apple and Knife are all markedly different.  We meet, variously, a woman who is being kept by her husband in a grand house; ‘the most famous courtesan in Esna’; a young woman who interviews a ‘Sumarni’, or witch; and a ‘devil woman’ who pays a man to act out her sexual fantasies.

Whilst some of the stories in this collection did not appeal to me on a personal level, or had rather unsatisfactory endings, I found that others had a real power to them.  They subvert expectation, and turn things on their heads.  Many of the tales take quite surprising turns, and Paramaditha seems to enjoy playing with the expectations which she assumes the reader has.  The stories are sensual, but not in a pleasant way; rather, they come across as an assault upon the senses. One of the elements which I found most interesting in Apple and Knife is the focus which Paramaditha places upon the physical body and its degradation.

I was impressed by Paramaditha’s writing, and the layering effect which she creates in many of her stories.  Her rich descriptions help to achieve this.  In ‘Scream in a Bottle’, for instance, she writes: ‘Rain falls in the yard, soaking the earth.  Not a downpour, but slow, drop by drop.  A long, soft tone, like a bow sliding against a violin string.’  The author is perceptive and descriptive, particularly when it comes to her depictions of characters.  In ‘Beauty and the Seventh Dwarf’, she writes: ‘I pieced together her story based on information that emerged at random, so the tale was incomplete, unsatisfactory.  It didn’t explain the enigma of her hideousness.  Waiting while she bathed one night, I hunted around for further clues.  Her room contained a mirror and a dresser…  Of course she didn’t need beauty products, nothing would redeem her looks. Even the mirror’s presence was odd.  Why would someone with such a grotesque face want to gaze at herself?’

Regardless of the things which I did not like in this collection, or which felt rather repetitive, it is undeniably wonderful that Indonesian literature is being championed at last.  Apple and Knife was fascinating to read, suffused as it is with so much darkness, and a lot of Indonesian folklore and cultural details, which I was unfamiliar with.  Whilst many of the stories are contemporary, I liked the use of historical fiction in ‘Kuchuk Hanem’, which has a representation of French author Gustave Flaubert within it.  The dark humour was also welcome, and worked well with Paramaditha’s storylines, which were, frankly, sometimes quite bizarre.

On the whole, Apple and Knife presents an interesting and multilayered picture of a very diverse nation; there is so much going on here, and a lot of themes have been addressed. The magical realism which is sometimes inserted does work well on the whole, although I found a couple of instances of this unnecessary or somewhat jarring.  Overall, though, the fantastical elements do add an extra layer of interest to the stories.  The majority are quite bewitching.