I am sure that the eagle-eyed amongst you are noticing a theme here, but I have wanted to read Radcliffe’s work for such a long time, and thought that placing A Sicilian Romance onto my Classics Club list would be a nudge in the right direction.  First published in 1790, the novel is firmly implanted within the Gothic tradition and veers toward the melodramatic almost from its beginning. 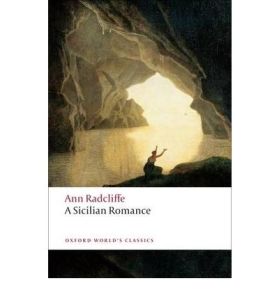 As is often the case with my Classics Club reviews, the following blurb of the Oxford World Classics edition illustrates the story perfectly, without giving too much away: ‘This early novel explores the cavernous landscapes and labyrinthine passages of Sicily’s castles and covents to reveal the shameful secrets of its all-powerful aristocracy. Julia and Emilia Mazzini live secluded in an ancient mansion near the Straits of Messina. After their father’s return to the island a neglected part of the house is haunted by a series of mysterious sights and sounds. The origin of these hauntings is only discovered after a series of breathless pursuits through dreamlike pastoral landscapes. When revelation finally comes, it forces the heroines to challenge the united forces of religious and patriarchal authority.’

A Sicilian Romance is most engaging from the first.  I found myself immediately spellbound, drawn as I was into the Sicilian setting.  Radcliffe moves the plot along beautifully, and the whole has been so tenderly written.  Much emphasis has been placed upon the senses and the general feel of the whole.  Radcliffe’s descriptions are often sumptuous, and the way in which she weaves in the imagined history of the castle and the Mazzinis who inhabit it is a definite strength, adding another layer to the whole.  It certainly has shades of Walpole’s The Castle of Otranto (review here) about it.

As one might expect from a Gothic novel, particularly one at the relative beginning of the canon, A Sicilian Romance is rather dramatic, even to Shakespearean heights in places; characters are taken prisoner and confined to dungeons, ‘cruel fate’ awaits, there are elopements, and strange goings on prevail.  The story is rather predictable in places, particularly as it nears its climax, and it certainly relies heavily upon melodramatic incidents.  A lot of opposites manifest themselves within the plot, from bravery and cowardice to the disparities between rich and poor, and from a social perspective, I found this fascinating.

A Sicilian Romance is rich and well-paced.  The third person perspective and use of the past tense which Radcliffe has made use of both work well; it is so over the top in places that the two together do not really act as distancing devices.  Whilst I was not too enamoured with the convenient ending of this moral novel, I am most looking forward to reading more of her work in future.  Ann Radcliffe’s work is a wonderful choice for existing fans of Jane Austen and the Bronte sisters; her writing is just as rich and descriptive, and I feel that she should certainly be more widely read.