I was lucky enough to spend a week in beautiful Amsterdam in early March, and am pleased to say that it has inspired me to pick up a wealth of themed reading within my yearly projects forecast for 2018.  I am actually thinking of Reading Cities as my main 2018 challenge, and focusing upon literature from and about my favourite places in the world.

That said, I hope you enjoy today’s Book Trail!  It begins in Amsterdam, and takes us all the way to Paris. 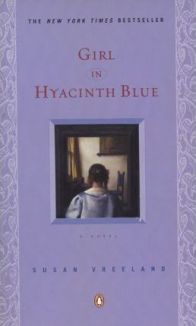 ‘This luminous story begins in the present day, when a professor invites a colleague to his home to see a painting that he has kept secret for decades. The professor swears it is a Vermeerbut why has he hidden this important work for so long? The reasons unfold in a series of events that trace the ownership of the painting back to World War II and Amsterdam, and still further back to the moment of the work’s inspiration. As the painting moves through each owner’s hands, what was long hidden quietly surfaces, illuminating poignant moments in multiple lives. Susan Vreeland’s characters remind us, through their love of this mysterious painting, how beauty transforms and why we reach for it, what lasts and what in our lives is singular and unforgettable.”‘

2. Lydia Cassatt Reading the Morning Paper by Harriet Scott Chessman
‘This richly imagined fiction entices us into the world of Mary Cassatt’s early Impressionist paintings. The story is told by Mary’s sister Lydia, as she poses for five of her sister’s most unusual paintings, which are reproduced in, and form the focal point of each chapter. Ill with Bright’s disease and conscious of her approaching death, Lydia contemplates her world with courageous openness, and asks important questions about love and art’s capacity to remember. ‘ 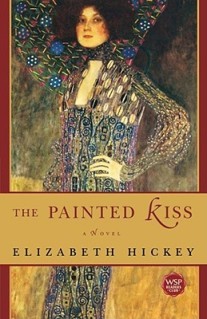 3. The Painted Kiss by Elizabeth Hickey
‘In this passionate and atmospheric debut novel, Elizabeth Hickey reimagines the tumultous relationship between the Viennese painter Gustav Klimt and Emilie Floge, the woman who posed for Klimt’s masterpiece The Kiss – and whose name he uttered with is dying breath.  Vienna in 1886 was a city of elegant cafés, grand opera houses, and a thriving and adventurous artistic community. It is here where the twelve-year-old Emilie meets the controversial libertine and painter. Hired by her bourgeois father for basic drawing lessons, Klimt introduces Emilie to a subculture of dissolute artists, wanton models, and decadent patrons that both terrifies and inspires her. The Painted Kiss follows Emilie as she blossoms from a naïve young girl to one of Europe’s most exclusive couturiers—and Klimt’s most beloved model and mistress. A provocative love story that brings to life Vienna’s cultural milieu, The Painted Kiss is as compelling as a work by Klimt himself.‘

4. With Violets by Elizabeth Robards
‘Paris in the 1860s: a magnificent time of expression, where brilliant young artists rebel against the stodginess of the past to freely explore new styles of creating—and bold new ways of living.  Passionate, beautiful, and utterly devoted to her art, Berthe Morisot is determined to be recognized as an important painter. But as a woman, she finds herself sometimes overlooked in favor of her male counterparts—Monet, Pissarro, Degas.  And there is one great artist among them who captivates young Berthe like none other: the celebrated genius Édouard Manet. A mesmerizing, breathtaking rogue—a shameless roué, undeterred and irresistible—his life is a wildly overgrown garden of scandal. He becomes Berthe’s mentor, her teacher…her lover, despite his curiously devoted marriage to his frumpy, unappealing wife, Suzanne, and his many rumored dalliances with his own models. For a headstrong young woman from a respectable family, an affair with such an intoxicating scoundrel can only spell heartbreak and ruin.  But Berthe refuses to resign herself to the life of quiet submission that Society has dictated for her. Undiscouraged, she will create her own destiny…and confront life—and love—on her own terms.‘

5. Claude and Camille: A Novel of Monet by Stephanie Cowell 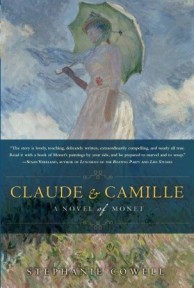 ‘In the mid-nineteenth century, a young man named Claude Monet decided that he would rather endure a difficult life painting landscapes than take over his father’s nautical supplies business in a French seaside town. Against his father’s will, and with nothing but a dream and an insatiable urge to create a new style of art that repudiated the Classical Realism of the time, he set off for Paris.  But once there he is confronted with obstacles: an art world that refused to validate his style, extreme poverty, and a war that led him away from his home and friends. But there were bright spots as well: his deep, enduring friendships with men named Renoir, Cézanne, Pissarro, Manet – a group that together would come to be known as the Impressionists, and that supported each other through the difficult years. But even more illuminating was his lifelong love, Camille Doncieux, a beautiful, upper-class Parisian girl who threw away her privileged life to be by the side of the defiant painter and embrace the lively Bohemian life of their time.  His muse, his best friend, his passionate lover, and the mother to his two children, Camille stayed with Monet—and believed in his work—even as they lived in wretched rooms, were sometimes kicked out of those, and often suffered the indignities of destitution. She comforted him during his frequent emotional torments, even when he would leave her for long periods to go off on his own to paint in the countryside.  But Camille had her own demons – secrets that  Monet could never penetrate, including one that when eventually revealed would pain him so deeply that he would never fully recover from its impact. For though Camille never once stopped loving the painter with her entire being, she was not immune to the loneliness that often came with being his partner.  A vividly-rendered portrait of both the rise of Impressionism and of the artist at the center of the movement, Claude and Camille is above all a love story of the highest romantic order.‘

6. The Private Lives of the Impressionists by Sue Roe
‘Manet, Monet, Pissarro, Cézanne, Renoir, Degas, Sisley, Berthe Morisot and Mary Cassatt. Though they were often ridiculed or ignored by their contemporaries, today astonishing sums are paid for the works of these artists, whose paintings are celebrated for their ability to capture the moment, not only in the fleeting lights of a landscape but in scenes of daily life. Their dazzling pictures are familiar?  But how well does the world know the Impressionists as people? The Private Lives of the Impressioniststells their story. It is the first book to offer an intimate and lively biography of the world’s most popular group of artists.‘ 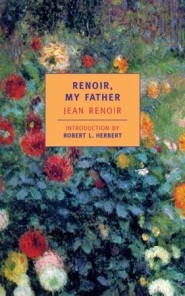 7. Renoir, My Father by Jean Renoir
‘In this delightful memoir, Jean Renoir, the director of such masterpieces of the cinema as Grand Illusion and The Rules of the Game, tells the life story of his father, Pierre-Auguste Renoir, the great Impressionist painter. Recounting Pierre-Auguste’s extraordinary career, beginning as a painter of fans and porcelain, recording the rules of thumb by which he worked, and capturing his unpretentious and wonderfully engaging talk and personality, Jean Renoir’s book is both a wonderful double portrait of father and son and, in the words of the distinguished art historian John Golding, it “remains the best account of Renoir, and, furthermore, among the most beautiful and moving biographies we have.”‘

8. Dawn of the Belle Epoque by Mary McAuliffe
‘A humiliating military defeat by Bismarck’s Germany, a brutal siege, and a bloody uprising Paris in 1871 was a shambles, and the question loomed, “Could this extraordinary city even survive?” Mary McAuliffe takes the reader back to these perilous years following the abrupt collapse of the Second Empire and France’s uncertain venture into the Third Republic.   By 1900, Paris had recovered and the Belle Epoque was in full flower, but the decades between were difficult, marked by struggles between republicans and monarchists, the Republic and the Church, and an ongoing economic malaise, darkened by a rising tide of virulent anti-Semitism.   Yet these same years also witnessed an extraordinary blossoming in art, literature, poetry, and music, with the Parisian cultural scene dramatically upended by revolutionaries such as Monet, Zola, Rodin, and Debussy, even while Gustave Eiffel was challenging architectural tradition with his iconic tower. Through the eyes of these pioneers and others, including Sarah Bernhardt, Georges Clemenceau, Marie Curie, and Cesar Ritz, we witness their struggles with the forces of tradition during the final years of a century hurtling towards its close. Through rich illustrations and evocative narrative, McAuliffe brings this vibrant and seminal era to life.”‘

Have you read any of these?

In which my boyfriend and I travelled to Amsterdam and Rotterdam, and had a whale of a time.

Music:
‘Let’s Get Out of This Country’ by Camera Obscura | ‘Holiday’ by The New Amsterdams | ‘Holland, 1945′ by Neutral Milk Hotel’

The Miniaturist, which uses the setting of seventeenth century Amsterdam,is Jessie Burton’s debut novel.  It has been dubbed a ‘feminist golden-age fiction’, focusing as it does upon slightly naive eighteen-year-old newlywed, Nella Oortman.

The Miniaturist begins in

January 1687, with a funeral for an as yet unknown character.  The opening scene is both intriguing and vivid: ‘The funeral is supposed to be a quiet affair, for the deceased had no friends.  But words are water in Amsterdam, they flood your ears and set the rot, and the church’s east corner is crowded’.  The narrative then loops back to 1686, beginning beside the ‘sludge-coloured’ Herengracht Canal in the city.

Nella has married the rich ‘power-broker’ Johannes Brandt, a man considerably older than she – when he ‘had asked for her hand, Nella decided to accept.  It would have seemed ungrateful and certainly stupid to say no.  What other option was there but… life as a wife?’ – but when she travels to her new home from the countryside, she finds him absent.  She is greeted by his sister, the neat-as-a-pin and rather formidable Marin.  Her relationship with Johannes does not unfold as she thinks it will, and she is soon disillusioned.

At the start of the novel, the sense of place has been well imagined, but this sadly dissipates somewhat in some of the scenes which follow the prologue.  The dialogue which Burton has crafted between her characters – like them, it can be said – does tend to be a little lacklustre, and it is rather too matter-of-fact to be sustained for the entire length of a novel.  The third person narrative perspective has been used throughout, and this does suit the story for the most part.  There are times in which it does let the storyline and emotions which it should be crammed with down, however.

The funeral in the prologue acts like a hook, drawing the reader in, but the rest of the book does not quite live up to expectations; one could almost say, sadly, that it disappoints.  The Miniaturist is nowhere near as absorbing as well-written as Tracy Chevalier’s The Girl with the Pearl Earring, which shares a similar setting and timeframe, and neither does it live up to the work of Sarah Waters or Donna Tartt, which it has been compared to in its blurb.