I have read a few of Elizabeth Bowen’s books to date, but still have rather a lot of her oeuvre outstanding.  With this in mind, I could not resist picking up a copy of her novella, A World of Love, which was first published in 1955.  This is one of Bowen’s later works, and only two finished novels were written after it.

The premise of A World of Love is that a twenty-year-old woman named Jane Danby, 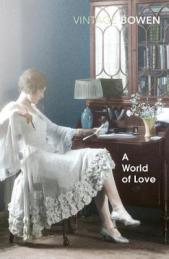 living in a crumbling old house in County Cork, Ireland, finds a package of old letters in the attic.  This leads her ‘into the world of love’, in which a rather eccentric neighbour, Lady Vesta Latterly, ‘rich, promiscuous, parvenue Englishwoman… will play a part in Jane’s awakening.’  The house, Montefort, ‘harbours a group of people held together by odd ties of kinship or habit, and haunted by the memory of its former owner who was killed in France as a young man.’  Jane lives there with her parents, Fred and Lilia, and twelve-year-old sister Maud, ‘all of whom owe their domestic situation to Montefort’s owner, Antonia’, who inherited the house from her cousin Guy, who died during the First World War.  The Danby family’s place here is ‘uncertain, never secure, never defined.’

A World of Love takes place during a heatwave.  It begins on a sultry June morning.  Here, writes Bowen, ‘The sun rose on a landscape still pale with the heat of the day before.  There was no haze, but a sort of coppery burnish out of the air lit on flowing fields, rocks, the face of the one house and the cliff of limestone overhanging the river.  The river gorge cut deep through the uplands.  This light at this hour, so unfamiliar, brought into being a new world – painted, expectant, empty, intense.’  As I have come to expect with Bowen’s writing, her descriptions sing.  The way in which she writes about Jane, too, is unusual and exquisitely layered.  When she introduces her protagonist, she asserts: ‘Kindled by summer though cool in nature, she was a beauty.  The cut of her easy golden hair was anachronistic over the dress she wore: this, her height and something half naive half studied about her management of the sleeves and skirts made her like a boy actor in woman’s clothes, while what was classical in her grace made her appear to belong to some other time.’

Bowen goes on to explore the isolation which surrounds the house and its inhabitants.  The day before, she explains, ‘They had all been to the Fete, and a backwash from it still agitated their tempers and nerves – in the house itself residual pleasure-seeking ghosts had been set astir.  The Hunt Fete, which drew the entire country, now was the sole festivity of the lonely year, for Montefort the only annual outing – which, more and more each summer, required nerve.’

The Vintage edition of A World of Love is introduced by Selina Hastings.  She notes that this book was written soon after the death of Bowen’s husband, but does not perhaps encompass the depths of sadness which one might expect.  Instead, writes Hastings, ‘although the book is in a sense a ghost story, with the pervasive presence of the dead permeating both place and plot, yet its mood is lyrical and light, a spirited comedy of manners finely balanced over a more sombre subterranean level of betrayal, frustration and loss.’  Bowen herself, indeed, called this novella ‘a joy to write’.  Hastings praises Bowen’s protagonist; she notes that she ‘has an almost wilful independence of spirit very different from the other solitary young girls who people Bowen’s novels.’

The family dynamics at play throughout this novella are deep and somewhat complicated.  The letters which Jane discovers quite by chance, wrapped up in a muslin dress which she takes a fancy to in the attic, provide a crux in the novella, causing – or perhaps just providing a means for allowing – the characters to quarrel amongst themselves.  These letters are not overly interesting to Jane at first: ‘The ink, sharp in the candlelight, had not faded.  She could not fail, however, when first she handled them, to connect these letters with that long-settled dust: her sense of their remoteness from her entitled her to feel they belonged to history.’  They soon begin to grow with an almost mythic importance in Jane’s mind, however.

A World of Love is an opulent novella, written by the most observant of authors.  Much of the little action which plays out here revolves around the characters, and what they mean to one another.  There is often a great deal of tension embedded within their relationships.  Each of Bowen’s creations is unusual in some way; Maud, for instance, has an imaginary friend of sorts named Gay David, who is banned from entering the dining room, and Lilia has ‘a neurosis about anyone standing outside a door.’  Whilst not overly plot heavy, there is a lot to consider within A World of Love, and it is a novella which I am sure to be thinking about for a long time to come.