I have enjoyed a few of Toni Morrison’s books in the past, but for some reason have not got around to picking up any of her novels in recent years.  This all changed when I came across an available copy of her debut, The Bluest Eye, on my library’s app, and settled down with it immediately.  The novel, which is deemed a modern classic, was first published in 1970.

The Bluest Eye ‘chronicles the tragic, torn lives of a poor black family in 1940s Ohio’, an era which I am always drawn to.  The Breedlove family consists of parents Pauline and Cholly, son Sam, and daughter Pecola.  Pecola, rather heartbreakingly, ‘becomes the focus of the mingled love and hatred engendered by her family’s frailty and the world’s cruelty as the novel moves toward a savage but poignant resolution.’ 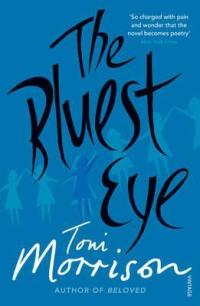 Although evidently a piece of historical fiction, there are many parallels which can be drawn with today’s society, the majority of which are sadly negative.  The edition which I read contained an enlightening foreword written by Morrison, in which she comments: ‘There can’t be anyone, I am sure, who doesn’t know what it feels like to be disliked, even rejected, momentarily or for sustained periods of time.’  She goes on to say that when she began to write The Bluest Eye, she was most interested in the ‘tragic and disabling consequences of accepting rejection as legitimate, as self-evident.’  Morrison also wished to acknowledge standards of beauty within society, which she says ‘was not simply something to behold; it was something one could do.’  She focused on ‘how something as grotesque as the demonization of an entire race could take root inside the most delicate member of society: a child; the most vulnerable member: a female.’

The novel’s beginning is both striking and shocking: ‘Quiet as it’s kept, there were no marigolds in the fall of 1941.  We thought, at the time, that it was because Pecola was having her father’s baby that the marigolds did not grow.’  Pecola is a young girl when the story begins, and she often tries to make herself disappear.  She is cruel about her own appearance, and is taught constantly by those around her that white beauty counts for more than black, and that only the utmost beauty can be attained by those who have blue eyes.  This, naively, is what Pecola begins to wish for: ‘Each night without fail, she prayed for blue eyes…  To have something as wonderful as that happen would take a long, long time.’

Pecola is at a great disadvantage; not only is she a vulnerable black girl, who has to contend with racism and violence in her day to day life, she also lives in abject poverty.  This sadly makes her an easy target for a lot of different people.  Using Pecola as a focus, Morrison is able to reveal the myriad prejudices of everyone around her.  Aside from Pecola, very few of the other characters in The Bluest Eye deserve the reader’s sympathy.

We learn of Pecola’s tumultuous and unsettled upbringing, with parents who rarely got on: ‘Cholly and Mrs. Breedlove fought each other with a darkly brutal formalism that was paralleled only by their lovemaking.  Tacitly they had agreed not to kill each other…  They did not talk, groan, or curse during these beatings.  There was only the muted sound of falling things, and flesh on unsurprised flesh.’  This physical instability also carried into the family’s physical home.  For a time, the Breedloves had lived in an abandoned shopfront, which ‘foists itself on the eye of the passerby in a manner that is both irritating and melancholy.’

Morrison uses multiple perspectives in The Bluest Eye, which built to create a novel with a great deal of depth.  The first part of the story is narrated by Claudia.  Pecola was sent to stay with her family by ‘the county’ when the Breedloves became homeless, and her father, Cholly, was taken to prison.

Morrison captures scenes and characters deftly, and has written a highly memorable coming of age story in The Bluest Eye.  The novel is suffused with sadness and violence, and reveals so much about humankind.  Morrison discusses the futility which can exist within relationships, the difficulties which Pecola faces, and the spiral of poverty which never allows her to escape.

From reading the comments of others, I was fully prepared that reading The Bluest Eye might put me through the emotional wringer.  It certainly did.  Although written in prose which was quite often beautiful, some scenes were very difficult to read due to their content.  Pecola is terribly hurt on several occasions, and the way in which this is relayed to the reader is sometimes a little emotionless; Morrison focuses upon the actions and the raw feelings which they create.  The Bluest Eye is so vivid, and it feels so real.  The story, and its scenes, are almost entirely troubling, but the novel itself soars.