Having read two of her novels now, I am almost certain that Pamela Hansford Johnson could fast become a favourite author of mine.  I adored An Impossible Marriage, which I found to be gripping and utterly believable, and keenly sought out The Holiday Friend, which my local library had a copy of.  This is sadly the only one of her novels available in my county library’s service, and I am trying to work out how I can read more of her oeuvre without purchasing them during my no-buy year.

I digress.  The Independent calls The Holiday Friend ‘a powerful tragedy’, and Kirkus writes that the novel ‘teases your curiosity and plays on your sympathy’.  It sounded rather different to An Impossible Marriage, but I was very much looking forward to reading it.  I am pleased to announce that I was gripped from the very first page. 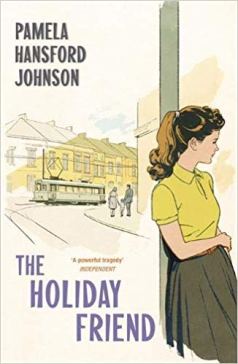 The Holiday Friend takes place over a fortnight in late July and early August, and is set entirely in the fictional seaside resort of Les Roseaux (Het Riet) in Belgium.  Happily married couple Gavin and Hannah Eastwood have returned to the region for their summer holiday, with their eleven-year-old son Giles in tow.  They are staying in the same guesthouse as the previous summer, content in the knowledge that they know so many people in the small town.  Les Roseaux is a town entirely shaped by the holiday season; ‘after the peak months,’ Hansford Johnson explains, ‘trade drops off rapidly’.

However, this summer’s holiday is destined not to run anywhere near as smoothly.  One of lecturer Gavin’s students, Melissa Hirst, has steadily become obsessed with him, and has followed him to Belgium.  She then proceeds to go out of her way to ‘bump into the couple repeatedly – soon becoming inescapable.’

When she writes about characters, Hansford Johnson reminds me somewhat of the wonderful Dorothy Whipple.  Here, there is the same sharpness of eye, slightly acerbic humour and commentary, and a great understanding of just how complex humans are.  One gets a feel for each of the characters as soon as they are introduced.  In the first snapshots which she gives of her protagonists, Hansford Johnson describes Gavin as ‘tall and graceful, a dressy man with an inclination to identify with youth; but he went no further in this than to wear his hair rather long over his forehead, though short at back and side, and to indulge in a broad orange tie, bought specially for this holiday.’  Hannah is ‘humble and thought little of herself’, and young Giles ‘dreamy and bad at school’.

Melissa, the antagonist of the piece, is described as ‘a fairly tall girl’ of twenty-one, an English student who has attended Gavin’s History of Art lectures.  Hansford Johnson shows Melissa’s all-consuming love for Gavin immediately, writing: ‘She lived when she was near him and at other times she merely existed.’  Melissa bumps into the family almost as soon as she arrives, and passes it off as a huge coincidence.  Reflecting upon meeting Gavin’s wife and child, ‘it appeared to her, despite herself, that they were a very united family.  But the marriage had been a long one, and she felt that there were times when he might be tired of it.’

Hansford Johnson’s descriptions of scenery are evocative, and they certainly hold appeal.  She writes, for instance, of the way in which ‘… the sun flushed the sand and glittered on the sea.  To the left, the dunes were white as ivory, and the reeds, from which the town got its name, shivered and whistled.’  It was lovely to read something set in Belgium; it is a place which I love to visit, but rarely see in fiction.  Hansford Johnson really brought the quiet beauty of the country for life for me.

The Holiday Friend was first published in 1972, and reprinted by Hodder and Stoughton in 2019, along with several of her other novels.  There are elements of the novel which feel entirely modern, but it is also wonderfully steeped in an era of afternoon tea and supper, of very specific fashions, and of the middle classes now being able to expand their horizons with a yearly holiday abroad.  There are some cliches at play here; the young, bossy German boy named Hans, for example, who is never happier than when others are running around at his beck and call.

Fans of both Dorothy Whipple and Celia Fremlin will, I feel, wholeheartedly enjoy the work of Hansford Johnson.  There are a lot of similarities which one could draw between her work and that of Whipple’s and Fremlin’s, but there is also something entirely original at play here.  The mounting, unsettling feeling which she has built so well perfectly suits the elements of the story, and the touch of domestic noir at play only adds to this.  The chilling elements which are threaded throughout The Holiday Friend have been handled expertly.  There is something quite claustrophobic about Melissa’s obsession with Gavin, and disdain for his wife and son.

The Holiday Friend is a really thorough study of several quite different characters, and what motivates and moves them.  Whilst I did not find it quite as gripping as An Impossible Marriage, it is still an excellent novel, and one which will stay with me for a long time to come.

5 thoughts on “‘The Holiday Friend’ by Pamela Hansford Johnson ****”