I picked up Jane Gardam’s Bilgewater in a charity shop, keen to get started with her work.  The unusual title and blurb both really appealed to me, and I was further intrigued by the reviews spattered over the cover, which call it variously ‘funny’, ‘deeply moving’, and ‘lively’.

Our protagonist is the wonderfully named Marigold Green, a young girl growing up in the boys’ school where her father is housemaster.  Marigold calls herself ‘hideous, quaint and barmy’, and is ‘convinced of her own plainness and peculiarity’.  Others call her ‘Bilgewater’.  Marigold explains: ‘My father… is known to the boys as Bill.  My name is Marigold, but to one and all because my father is very memorable and eccentric and had been around at the school for a very long time before I was born – I was only Bill’s Daughter.  Hence Bilgewater.  Oh, hilarity, hilarity!  Bilgewater Green.’ 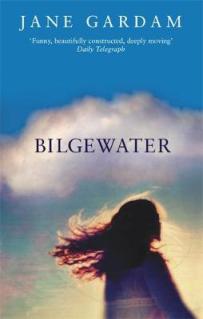 At the outset of the novel, the young narrator says, quite matter-of-factly, ‘My mother died when I was born which makes me sound princess-like and rather quaint.’  Marigold often feels quite alone in the male-dominated world in which she lives.  She spends much of her time with her father, in complete silence: ‘Except when he is teaching,’ she reflects, ‘he is utterly quiet…  He never rustles, coughs or hums.  He never snuffles (thank goodness) and he never, ever, calls out or demands anything.’  She has one ally, a woman named Paula, who is the closest thing she has to a mother.  The blurb suggests that Marigold is ‘ripe for seduction by entirely the wrong sort of boy’, and comments that she ‘suffers extravagantly and comically in her pilgrimage through the turbulent, twilight world of alarming adolescence.’

Some way into Bilgewater, the mysterious Grace comes into her orbit; the two girls were best friends as small children, but time apart has made them almost complete strangers to one another.  Marigold comments: ‘Grace I saw as a figure far, far above coarseness or sloppiness – a figure of real Romance, a creature of turrets, moats and lonely vigils, gauntlets and chargers, long fields of barley and of rye.’

The novel opens in Cambridge during December, where the almost eighteen-year-old Marigold has been granted an interview at the University, and has travelled down from Yorkshire to attend.  We meet her awkwardness head on at this point; she feels like a fish out of water.  I warmed to her immediately.

Marigold’s narrative voice is entirely engaging, and wholly convincing.  It resembles an almost stream-of-consciousness style.  I was pulled right in to her story, keen to learn more about her and her world.  She is a witty and amusing character.  Marigold is very conscious of her own self; she frankly reflects, at one point: ‘I have a very good balance of hormones all distributed in the right places.  The only thing that ever worried [Paula] was that I started brewing them so early…’.  The novel is a coming-of-age story, in which our protagonist tries to find her feet; she repeatedly pushes herself outside of her comfort zone in various ways.  In short, I do not think that I will ever be able to forget her.

First published in 1976, Bilgewater was devoured eagerly by this reader at the end of 2019.  I found myself absolutely adoring everything about the novel, and wanted to read far more about the charming and unusual Marigold than Gardam allowed me.

A short novel at just 200 pages, Bilgewater is quite perfect; whilst I yearned for more of Gardam’s writing, and her fascinatingly flawed and realistic cast of characters, I know that I thankfully have a lot of the prolific author’s stories yet to read.  Bilgewater is a real gem, and a book which I will be recommending to every reader in my life.