Like many readers, I quite enjoyed Hungarian author Magda Szabó’s novella, The Door, when I read it some years ago.  For one reason or another, however, I have failed to pick up either of her other novels which have since been translated into English, Iza’s Ballad and Katalin Street.  When MacLehose press approached me to ask if I wanted a copy of her most famous novel, Abigail, which was first published in 1970, I jumped at the chance. 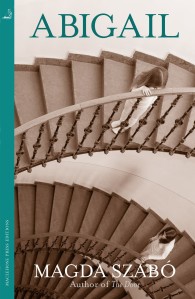 Abigail, translated for the first time into English by Len Rix, is the most widely read novel among secondary school pupils in Hungary.  There is even a rock opera based upon it, which performs in Budapest.  Abigail forms a loose trilogy, alongside The Door and Katalin Street ‘about the impact of war on those who have to live with the consequences.’

Very much a coming-of-age novel, Abigail takes place during three months in 1943, a period in which Hitler was preparing to occupy Hungary.  Foreseeing this, and concerned for the safety of his daughter, Gina Vitay’s father, a general, sends her away to an isolated and strict Puritanical school in the ‘provincial’ city of Árkod, which appears ‘more like a fortress’.  ‘Lively, sophisticated, somewhat spoiled’ Gina feels immediately as though she does not fit in, used as she is to the bright lights and parties of Budapest.  Over time, Gina is ‘forced to find out the true realities of life for those less privileged than herself’; she ultimately ‘learns lessons about the nature of loyalty, courage, sacrifice and love.’

Fourteen-year-old Gina has a very close relationship with her father, a General in the Army.  When she is sent away to school, the omniscient narrator observes: ‘… although neither of them had experienced it in such elementary terms, they loved each other with a passion and both felt the world complete only when they were together.’

Abigail is not a human character; rather, she is a named statue on the school’s grounds.  The pupils turn to her in times of strife, writing messages addressed to her, and hoping that she will be able to lend a hand.  They put so much faith into her, believing her to be real, and to hold power.

At times, Szabó is finely attuned to the moods of her characters, and to what drives them.  When Gina’s father first leaves her at school, for instance, the awkwardness of their parting is meticulously imagined: ‘Once again there was no exchange of glances between the two of them; both kept their eyes fixed on the carpet.  The silence was like that when a bee wanders in through an open window and drones on and on, without ceasing.’  At this point in time, Gina’s sole discomfort is also focused upon: ‘Never in her life had she felt so hapless, so perplexed, so utterly out of her depth…  Here, she was totally disoriented, she could make sense of nothing.’  We are privy to her tumultuous moods, to her every thought and feeling.

From the outset, Gina is headstrong and determined, and I found her quite a thoroughly examined character.  Like many teenagers, it could be said, she is at first self-interested and self-motivated, and is unable to grasp the bigger picture – until a rather strained conversation with her father ensues some way into the book.  She clashes, quite violently, with her peers, and the relationship between them sours immediately.  Towards the middle of the book, however, when she is finally accepted by the girls in her form, she becomes almost interchangeable with them.  She loses any of the spark which she carried so well, and becomes cliched, almost a caricature of a teenage girl.

Abigail is described in its blurb as ‘a tale of suspense and revelation in a shifting world where things are often not quite as they first seem.’  This is true to an extent, but I personally located only one or two moments of suspense throughout the entirety of the 440-page novel, and these appeared right towards the end.  Whilst elements of the story were interesting enough, I found the narrative rather detached.  I expected Abigail to be far more immersive, and to provide a more thorough and consistent character study than it did.  Yes, characters change, but Gina seemed to lose every quality which at first made her unique, and set her apart from others.

Rix’s translation reads well, but the prose is often quite clunky, and the sentences rather old-fashioned in their structure, phrasing, and conversational intonations.  I imagine that this is a true reflection of the original text, but I did find it a little difficult to get into at times.

Not a lot happens in Abigail, until one reaches the last eighty or so pages.  Much of the narrative is involved with the minutiae of life in the school, and the small, overexaggerated dramas which ensue between pupils and staff alike.   I admired the idea of the novel – namely, to suggest how a young girl’s life can be so completely changed in the face of war, and how difficult this can be to become accustomed to – but many parts of the story felt rather too drawn out.  I personally love novels where not a great deal happens, but in this instance, the plot points which did occur felt altogether too obvious.

Abigail began well, and I did have a real interest in our lively and quite unusual protagonist, but this was lost when she became almost insipid.  Had she been more of a consistent character, and retained some of her individuality, I imagine that I would have enjoyed reading her story far more.  As time progressed, I found myself caring about Gina less and less.  Although some elements of the novel were undoubtedly well conceived, others fell flat for me, and there was very little consistency to be found.