Rose Allatini’s 1918 novel, Despised and Rejected, is one of Persephone’s new titles for Spring 2018.  Allatini was an highly prolific author, publishing books under several pseudonyms; Despised and Rejected was first released under the name of A.T. Fitzroy.    Rereleased in Persephone’s distinctive dove grey covers a century after its original publication, Despised and Rejected is set during the First World War, and is described as a ‘gay pacifist novel’.  Persephone have highlighted its importance, calling it ‘one of the pioneering gay novels of the twentieth century.’ 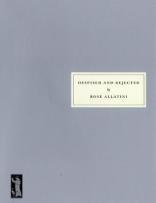 Despised and Rejected takes two characters as its focus: ‘a gay conscientious objector and his relationship with a young woman who (as he realises but she does not) is a lesbian.’  Composer Dennis Blackwood is the former of these, and Antoinette de Courcy, a young woman of French descent, the latter.

Of course, to the queasy and old-fashioned men of yesteryear, Despised and Rejected was deemed scandalous, although for its anti-war stance rather than its depictions of homosexuality.  Upon its publication, the novel sold eight hundred copies before it was deemed ‘morally unhealthy and most pernicious’.  The publisher, C.W. Daniel, was put on trial, fined, and ordered to surrender the remaining print run of two hundred copies.

The novel is constructed using a three-part structure; the first of these takes place just before the war, and the second and third during it.  Despised and Rejected opens in the Amberhurst Private Hotel in an undisclosed location; here, the Blackwood family are holidaying, and their son Dennis meets Antoinette.  The two are drawn together almost immediately, although Antoinette’s focus is firmly placed upon a secretive woman also staying at the hotel named Hester.  Like Dennis, Hester realises that Antoinette is sexually attracted to women, but Antoinette herself is naive in this respect.  Antoinette is just twenty-one.  As with Dennis, we are given hints and clues that she is attracted to her own sex, but she is unaware that there is a reason for her gravitation toward them, and the lack of feeling which kissing men inspires within her.

From the beginning, Allatini demonstrates that Dennis’ relationship with his father is fractious: ‘Dennis said nothing and set his lips tightly, as was his way when Mr Blackwood jarred upon his nerves more exquisitely than usual.  He disliked his father, disliked the whole coarse overbearing masculinity of the man.  There was between them an antagonism that was fundamental, and quite apart from the present source of grievance’.  His mother sets out to protect him at all times, but their relationship too is, in ways, problematic.  Dennis, she writes, ‘was always on the defensive, even with his mother.  Perhaps with his mother most of all, because he felt that she was most akin to him, and might at any moment come to touch the fringe of that secret world of his…  a world that must remain secret even from the mother who loved him as perhaps no other woman on earth would ever love him.’  This is the first hint given in the novel about Dennis’ homosexuality, something which is continually aware of within himself, but which he has never articulated to anyone around him.  Allatini shows that Mrs Blackwood realises there is something a little different about Dennis, but cannot quite connect the dots: ‘Perhaps he had nothing to tell.  Perhaps she only imagined that he wasn’t happy.  Artists were sometimes peculiar – she clutched at that – and her boy was an artist: perhaps that accounted for it.  Her reason, working in a peculiarly narrow

circle, round and round, round and round, accepted this as the solution, and was at peace.  But her instinct, less narrow, more subtle, blindingly groping, refused to be thus pacified.  There must be – something.  But what?  What…?’

Dennis is revealed in the fragments of letters which he writes to Antoinette; this use of his own voice adds more depth to the novel.  He is frightfully ashamed of his own difference, and of his desires.  Allatini writes, ‘He must be for ever an outcast amongst men, shunned by them, despised and mocked by them.  He was maddened by fear and horror and loathing of himself.’  This element of the novel, which deals with Dennis’ feelings, is achingly human, as are his convictions when it comes to refusing to fight in the First World War.  With regard to this, ‘The thought of war inspired in him none of those feelings with which convention decreed that ever true Briton should be inspired…  The whole thing was damnable, and stupid, and cruel…  pretended that it was a noble thing, a glorious game, a game which every Englishman should be proud to be playing.’

Allatini’s descriptions are both vivid and charming.  Of a small, unnamed village in which Dennis and his friend Crispin stay whilst travelling through Devonshire, she writes: ‘… it has an old-world triangular village green, planted with giant oak trees, and enclosed on two sides by dear little thatched cottages with trim little gardens; and it has an ivy-clad church and the usual combination of Post Office and all-sorts shop, in which you may revel in the complex odour of boots, cheese, liquorice, soap, sawdust, biscuits, Fry’s chocolate and warm humanity.’  In one of his letters, Dennis writes to Antoinette, ‘We’re zig-zagging about the country in the most amazing style.  And I wish I could collected all the things I’ve loved most and bring them back to you.’

Despised and Rejected is a highly immersive novel, and an incredibly moving one at that.   Allatini’s writing is intelligent, stylish, and heartfelt.  She writes with clarity and sensitivity, in a way which which feels marvellously balanced.  She has such a deep understanding of her characters, and the problems which their true selves cause for them.  Allatini presents an incredibly strong, measured, and rousing argument for pacifism, discussing the horrors and futility which war brings, and the way in which they often create more problems when they solve.

Despite being published a century ago, Despised and Rejected feels like a novel of our time; it, above all, demonstrates the need for equality and understanding, as well as peace, both within the world and individually.  It is a book which we can learn an awful lot from.

2 thoughts on “One From the Archive: ‘Despised and Rejected’ by Rose Allatini *****”