In a writing career which spanned over sixty years, it is a real shame that the majority of Lettice Cooper’s books are out of print, and that most prove quite difficult, or at least rather expensive, to procure.  She was awarded the Order of the British Empire in 1968, and had much praise bestowed on her for her services to literature.  Of her work, I had read only The New House, which I very much enjoyed, before finding an inexpensive copy of Fenny – the 264th title on the Virago Modern Classics list – online.  The green-spined edition features an introduction by Cooper’s peer, Francis King.  He notes the high quality of Cooper’s writing, which has ‘a consistency of style, of moral outlook’. 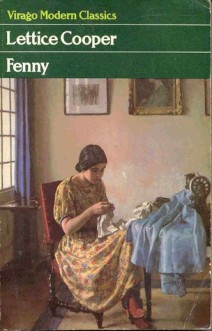 First published in 1953, Fenny is a much later novel than 1937’s The New House.  As its predecessor, it enticed me from the very beginning.  It focuses on a young woman named Ellen Fenwick, who has worked at a school in her native Yorkshire for several years.  She is offered a summer post in Tuscany, in a secluded setting quite near to Florence, as the governess to an eight-year-old girl named Juliet Rivers, the granddaughter of a famous actress whom Ellen very much admires.  The entire situation thus presents a ‘dazzling prospect’ for her.  It seems ‘far removed from the fireside teas and prize-givings’ which her current job includes, and Italy promises a ‘dreamlike setting for the new life she anticipates’.

Accepting the post, Ellen soon finds herself journeying to Italy.  When she arrives at the Villa Meridiana, she finds freedom of a sort: ‘she tastes her first cocktail, cuts her hair, becomes “Fenny” – and falls in love.’  However, set as the novel is against rather a tumultuous period in history, she is ‘forced to come to terms with both emotional and political realities.’  The novel spans the period between 1933 and 1949, in which Ellen forges a new life for herself.  Throughout, Cooper charts her growth into a woman of middle age, and the circumstances which surround her, causing her to examine herself and adapt accordingly.  Ellen, throughout this, remains a believable character, constantly putting her own wellbeing behind that of those who surround her.  Of Ellen, King writes in his introduction: ‘That, in the years ahead, she should suffer so many disappointments and yet never become embittered, never lose her faith in life, never (most important of all) lose her faith in herself, is what makes her such an admirable and appealing character.’  Indeed, I liked Ellen from the first, and was so interested in the new life which she forged for herself, as well as learning about what she had left behind.

Through Ellen’s movement to mainland Europe, Cooper was able to explore one of her favourite tropes – the differences between North and South.  The North is mentioned only briefly in the novel, but it is Ellen’s assimilation into an entirely new culture and way of life which is interesting.  Added to this is the fact that before travelling to the Villa Meridiana, Ellen has never been abroad.  Far before she reaches the final stop on the train, her excitement is palpable; Cooper writes: ‘… she had been sitting on the edge of the seat, a starter poised for a race…’.  Upon arrival, Ellen is transfixed on her surroundings: ‘The strange city through which they drove was the scenery of a dream.  She saw tall, flat-fronted houses with shuttered windows, stone facades lit by street lamps.’  Throughout, Cooper’s observations of character, and descriptions of place, are perceptive and sumptuous respectively.  Italy has been used as a character in its own right here, its presence feeding into the relationships and decisions of each character within the novel.  Soon after Ellen’s arrival, Cooper describes one of the endless lovely scenes which unfold over her surroundings: ‘Every evening the sun set in splendour over the town of Florence, and as the red faded to rose and the last stain of rose died from a sky the colour of old turquoise, the sombre green cypresses became hard black shapes against the deepening blue and the appearing stars.’

Fellow Virago author Storm Jameson called this ‘certainly Lettice Cooper’s finest novel’, and it is easy to see why.  Fenny is both introspective and evocative.  It believably charts the life of a single woman in circumstances which change, and cause her to change in consequence.  Cooper has such an understanding and an awareness of her protagonist, and the things which others around her cause her to feel.  In this manner, Fenny is a fascinating and insightful character study.    Whilst, of course, the focus is upon Ellen, we do learn about the Rivers family, their friends who live not too far away, and another tutor, amongst others who are introduced later on.  The third person perspective which has been used throughout works well, and Cooper’s prose is pitch perfect.

I found the extended timeframe in which Ellen’s story is told to be effective, and so much of Cooper’s commentary pertinent and applicable to today: ‘Of course I am interested in politics,’ a lecturer tells Ellen.  ‘Life, it seems to me, is not divisible.  One cannot disassociate oneself, especially in these days, even if one does not take an active part in them.’  I very much enjoyed reading Fenny, and whilst I did not find the final section as transporting, nor as realistic, as the previous ones, it is still a Virago publication which I treasure.