There is little that I enjoy better in winter than curling up with a startling Gothic novel.  Below are five of my favourites.

1. Florence and Giles by John Harding
‘In a remote and crumbling New England mansion, 12-year-old orphan Florence is neglected by her guardian uncle and banned from reading. Left to her own devices she devours books in secret and talks to herself – and narrates this, her story – in a unique language of her own invention. By night, she sleepwalks the corridors like one of the old house’s many ghosts and is troubled by a recurrent dream in which a mysterious woman appears to threaten her younger brother Giles. Sometimes Florence doesn’t sleepwalk at all, but simply pretends to so she can roam at will and search the house for clues to her own baffling past. After the sudden violent death of the children’s first governess, a second teacher, Miss Taylor, arrives, and immediately strange phenomena begin to occur. Florence becomes convinced that the new governess is a vengeful and malevolent spirit who means to do Giles harm. Against this powerful supernatural enemy, and without any adult to whom she can turn for help, Florence must use all her intelligence and ingenuity to both protect her little brother and preserve her private world. Inspired by and in the tradition of Henry James’ The Turn of the Screw, Florence & Giles is a gripping gothic page-turner told in a startlingly different and wonderfully captivating narrative voice.’ 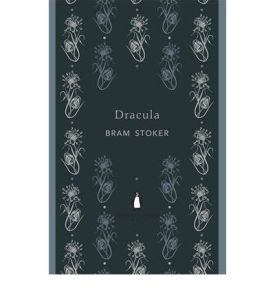 ‘A chilling masterpiece of the horror genre, “Dracula” also illuminated dark corners of Victorian sexuality. When Jonathan Harker visits Transylvania to advise Count Dracula on a London home, he makes a horrifying discovery. Soon afterwards, a number of disturbing incidents unfold in England: an unmanned ship is wrecked at Whitby; strange puncture marks appear on a young woman’s neck; and the inmate of a lunatic asylum raves about the arrival of his ‘Master’, while a determined group of adversaries prepares to face the terrifying Count.’

3. Jane Eyre by Charlotte Bronte
‘”I am no bird; and no net ensnares me; I am a free human being with an independent will.” Bronte’s infamous Gothic novel tells the story of orphan Jane, a child of unfortunate circumstances. Raised and treated badly by her aunt and cousins and eventually sent away to a cruel boarding school, it is not until Jane becomes a governess at Thornfield that she finds happiness. Meek, measured, but determined, Jane soon falls in love with her brooding and stormy master, Mr Rochester, but it is not long before strange and unnerving events occur in the house and Jane is forced to leave Thornfield to pursue her future.’

4. Rebecca by Daphne du Maurier
‘Working as a lady’s companion, our heroine’s outlook is bleak until, on a trip to the south of France, she meets a handsome widower whose proposal takes her by surprise. She accepts but, whisked from glamorous Monte Carlo to brooding Manderley, the new Mrs de Winter finds Max a changed man. And the memory of his dead wife Rebecca is for ever kept alive by the forbidding housekeeper Mrs Danvers… An international bestseller that has never gone out of print, Rebecca is the haunting story of a young woman consumed by love and the struggle to find her identity.’

5. The Turn of the Screw by Henry James
‘For lucidity and compactness of style, James’s short novels, or novelles, are shining examples of his genius. Few other writings of the century have so captured the American imagination. When “Daisy Miller,” the tale of the girl from Schenectady, first appeared in 1878, it was an extraordinary success. James had discovered nothing less than “the American girl”–free spirited, flirtatious, an innocent abroad determined to defy European convention even if it meant scandal . . . or tragedy. But the subtle danger lurking beneath the surface in “Daisy Miller” evolves into a classic tale of terror and obsession in “The Turn Of The Screw.” “The imagination, ” Henry James said to Bernard Shaw, “has a life if its own.” In this blood-curdling story, that imagination weaves the lives of two children, a governess in love with her employer, and a sprawling country house into a flawless story, still unsurpassed as the prototype of modern horror fiction.” “The Turn Of The Screw” seems to have proved more fascinating to the general reading public than anything else of James’s except “Daisy Miller.”‘

Which are your favourite Gothic novels?  Are there any which you would recommend to me?