The twenty-eighth book on the Penguin Modern list is ‘the father of modern African literature’ Chinua Achebe’s Africa’s Tarnished Name.  Of Achebe’s work, the only book of his which I had read before picking this up is Things Fall Apart, which I very much enjoyed.  I was really looking forward, therefore, to reading some of his non-fiction, and this collection of ‘electrifying essays on the history, complexity and appropriation of a continent’ felt like the perfect way in which to begin his oeuvre. 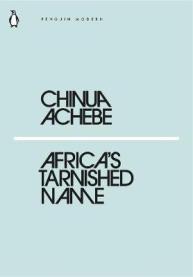 Africa’s Tarnished Name is comprised of four essays: ‘What’s Nigeria to Me?’, which is adapted from a speech given in Lagos in 2008; ‘Travelling White’, which was first published in The Guardian in 1989; the titular essay, published in Another Africa in 1998; and ‘Africa is People’, which has been adapted from a speech delivered in Paris in 1998.  All of these essays can be found in the 2011 collection entitled The Education of a British-Protected Child.

Achebe was born into the ‘Igbo nation’, one of the largest ethnic groups in Africa, and the largest in Nigeria.  In ‘What’s Nigeria to Me?’, Achebe discusses nationality, and the granting of independence to Nigeria in 1960.  He goes on to point out the governmental issues which came with this independence, and the subsequent coups and massacres of citizens, which led to a bloody Biafran civil war.  He discusses, quite openly, his difficult relationship with Nigeria.  He writes that his feeling toward the country ‘was one of profound disappointment’, before going on to say: ‘I found it difficult to forgive Nigeria and my countrymen and -women for the political nonchalance and cruelty that unleashed upon us these terrible events, which set us back a whole generation and robbed us of the chance, clearly within our grasp, to become a medium-rank developed nation in the twentieth century.’

Achebe’s essays feel immediately warm and amusing, particularly with regard to their tongue-in-cheek humour.  The first essay begins: ‘Nigerian nationality was for me and my generation an acquired taste – like cheese.  Or, better still, like ballroom dancing.  Not dancing per se, for that came naturally; but this titillating version of slow-slow-quick-quick-slow performed in close body contact with a female against a strange, elusive beat.  I found, however, that once I had overcome my initial awkwardness I could do it pretty well.’

He discusses, amongst other things, the portrayal of Africa in fiction, and Western perceptions of the continent.  Achebe makes some very interesting points throughout.  ‘Africa’s Tarnished Name’, for instance, begins: ‘It is a great irony of history and geography that Africa, whose landmass is closer than any other to the mainland of Europe, should come to occupy in the European psychological disposition the furthest point of otherness, should indeed become Europe’s very antithesis.’  The second essay, ‘Travelling White’, details Achebe’s travels in other African countries during 1960, and the racism which he encountered along the way.

In each of these essays, Achebe has packed so much into such a compact space, without sparing his reader explanations.  He writes with brevity, and with confidence, and speaks with both authority and intelligence.  These essays are filled with wisdom and measured arguments, and are often quite profound.  There is so much which can be learnt from this important collection, and it is clear to see why the author is so revered.  Achebe is a gifted essayist, and I certainly do not want to leave it too long before I read more of his work.