“Two men have been enlisted to kill the head of the Gestapo. This is Operation Anthropoid, Prague, 1942: two Czechoslovakian parachutists sent on a daring mission by London to assassinate Reinhard Heydrich – chief of the Nazi secret services, ‘the hangman of Prague’, ‘the blond beast’, ‘the most dangerous man in the Third Reich’. His boss is Heinrich Himmler but everyone in the SS says ‘Himmler’s brain is called Heydrich’, which in German spells “HHhH”. 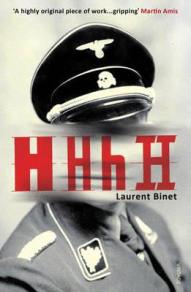 “All the characters in HHhH are real. All the events depicted are true. But alongside the nerve-shredding preparations for the attack runs another story: when you are a novelist writing about real people, how do you resist the temptation to make things up? HHhH is a panorama of the Third Reich told through the life of one outstandingly brutal man, a story of unbearable heroism and loyalty, revenge and betrayal. It is improbably entertaining and electrifyingly modern, a moving and shattering work of fiction.”

I was so very impressed by Laurence Binet’s HHhH. I found the entire novel incredibly engrossing, and I loved the mixture of fact and fiction which Binet had used. The different narrative structures which he made use of worked wonderfully, both singularly and together. The translation has been rendered with such care and precision that it never feels awkward, as many pieces of translated fiction can so easily. Binet’s writing suits the story he has crafted, and his take on the tale is really quite chilling at times. He portrays the horrors of the Holocaust and the Nazi regime very well indeed. His descriptions of Prague, one of my favourite cities, are exquisite.

I have never before read a book without page numbers, but I am glad that this was the first. Odd as it may sound, the structure of the book just does not make them necessary. HHhH is a book to be drawn into and to forget the world around you as you continue to read. It is more interesting in such cases, I feel, to be so engrossed that you no longer wonder how many pages you have left to go until you reach the end. HHhH is marvellously paced, particularly towards the end, and is a must read for any self-confessed history nerds out there.