I have wanted to read Julia Stuart’s The Pigeon Pie Mystery for what feels like absolutely ages, after really enjoying her other three novels (The Matchmaker of Perigord (2007), Balthazar Jones and the Tower of London Zoo (2010), and The Pearl Fisher of Scotland (2016).  The Pigeon Pie Mystery is her third novel, and is set largely inside Hampton Court Palace and its grounds during the reign of Queen Victoria.

As still happens today, the reigning monarch allowed ‘grace and favour’ residents to make their home in Hampton Court Palace, with their rent, at least, being paid by the state.  One such character, whom Stuart focuses upon in this novel, is an Indian Princess named Alexandrina, and nicknamed Mink.  She is invited to make her home in the palace in March 1897 after her father dies ‘in such unusual circumstances’ and leaves her penniless, forcing her to move out of their luxurious home, and into quarters with her hopeless and stubborn maid, Pooki. 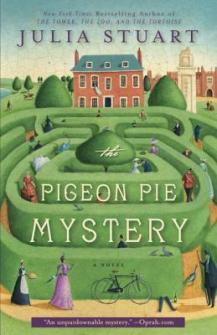 Soon after she arrives, Mink ‘is befriended by three eccentric widows’, who invite her to a picnic, along with many other grace and favour residents and their families.  Pooki decides to bake a great British favourite, a pigeon pie, for the occasion.  At the picnic, nobody touches this, save for General-Major Bagshot, who dies.  The coroner discovers traces of arsenic in his system, and Pooki thus becomes the favourite suspect in the ensuing investigation.  A ‘fun and quirky murder mystery’ is promised.

This quirkiness is perhaps most apparent with a couple of the peripheral characters, as well as with Stuart’s rather inventive chapter headings.  These range from ‘The Ominous Arrival of the Undertaker’ and ‘An Unfortunate Incident with the Blancmange’, to ‘The Hazards of a Stuffed Codpiece’.  The character list which has been included also features quite unusual attributes and details about the protagonists.  The Countess of Bebbington, for example, is a ‘parsimonious widow in perpetual mourning, with an addiction to ferns’, and the Watercress Seller who ‘hawks outside the palace gate and sleeps in a coffin’.

I hoped that The Pigeon Pie Mystery would be just as entertaining as Stuart’s other novels, but was left feeling a little disappointed.  Whilst there are some undoubtedly creative and amusing elements at play within it, they become lost somewhat in rather a saturated plot, peopled with too many characters.  The writing is certainly intelligent here, but it feels as though Stuart was trying to make too many things work; she had too many fingers in too many pies, and the result became something of a muddle, unfortunately.

The Pigeon Pie Mystery reads like a comedy of manners; in this way, it does tend to become a little silly in places.  Whilst the novel did keep my interest, it was not at all what I was expecting.  It felt quite different to Stuart’s other books, perhaps just because it is her only historical novel.  Although there is great period detail, and a clearly large amount of research which has gone into this work, it feels flatter than it should.